Might Once Upon a Time‘s Prince of Thieves be robbed of his life? Can NCIS enlist a heavy hitter? Is S.H.I.E.L.D.‘s Ward more unpredictable than ever? Read on for answers to those questions plus teases from other shows

Did you get an answer from Once Upon a Time‘s Sean Maguire about the rumor that he’s leaving? —MRiku
As promised in Ask Ausiello, I did ask Maguire about this at the 100th-episode party, and he was (alas) expectedly spoiler-free on his status — though he did acknowledge that dangerous times are ahead for Robin and the other heroes. “We’re going to the Underworld, so I don’t expect much good stuff is going to happen! But as to where it’s going to lead [for Robin], I can’t say,” he hedged. “There are obstacles everywhere — a lot of bad people from the past are coming back and they are not too happy with our heroes. If Once Upon a Time was the Star Wars franchise, this would be Empire Strikes Back. It’s going to get dark, it’s going to be scary, and there will be surprises.”

Is there any chance that Agent Borin will become the new NCIS series regular? –Jules
I thought my original story on “Tess” made this clear, but no, the series is looking to introduce a brand-new character, not promote a recurring player. (Ergo the detailed casting call.) In fact, a source tells me the dream is fill this spot with some truly “Wow!” casting — as in a film actress looking to transition to TV (a la Halle Berry and Extant) — as a means to drum up buzz for what will be the long-running drama’s 14th season.

Do you have any scoop 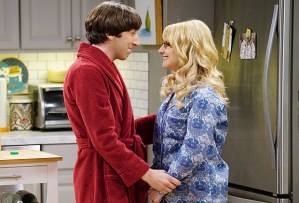 on The Big Bang Theory? –Aleksandrs
Howard and Bernadette’s big news just might give birth to the long-awaited casting of the dad-to-be’s estranged father. “[Howard’s dad] is certainly floating out there somewhere, and this baby is certainly a reason why we might finally get to see him,” says EP Steve Molaro. “I will tell you that we’ve been starting to think about other people we haven’t met, like Leonard’s dad and who that might be. We’re thinking about [exploring that before the end of Season 9].”

Do you have any info on what the Maveth Inhuman’s agenda will be when Agents of S.H.I.E.L.D. returns? Is he planning to rule Earth, like Hydra thinks? Or does he have his own plans? –Michaela
His (its?) agenda is a massively looming question as Season 3 resumes, as affirmed by this excerpt from the winter premiere’s logline: “The divide between those who want to protect Inhumans and those who seek to destroy them is constantly widening, and Hydra, now strengthened by Grant Ward, looms once again. However, Ward is no longer the same villainous traitor that they once knew, and [in him] the team faces an all-new enemy whose motivations, goals and strengths are unclear.” I’ll have more on the slithery subject from Brett Dalton in the weeks to come.

Any word yet on if/when Agents of S.H.I.E.L.D. will tie into Captain America: Civil War? –Ryan
Maybe it already has…? As Clark Gregg points out, the first half of the season “set up… the beginning of Secret Warriors, and some stuff that miiiight connect with Civil War — although I don’t know that! But with the Inhuman outbreak, you have people with powers suddenly all over the place. And there are those who feel that people who evolve differently need to be eradicated. And there are those who remember that those people are also humans. And there are divisions among those people.” All of which kinda sounds like the seeds of a “civil war” to me! 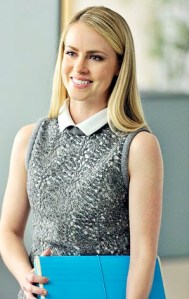 to see Katrina on any upcoming episodes of Suits? I would love for her to have more screen time. —Dana
Louis’ former protege (played by 12 Monkeys star Amanda Schull) will make her return in this season’s finale. Someone who won’t be reappearing during the final episodes? Harvey’s therapist Dr. Paula Agard (Christina Cole), who brought quite a bit of growth to the lawyer during the first half of the season. “We couldn’t find a way to integrate [her] into the back six, given the path that we chose,” explains EP Aaron Korsh. “It does not mean that we’ve seen the last of her. We would all like to see her again. We’re just trying to work on that [for] Episode 601.”

Will The Flash‘s Barry ever tell Iris about their kiss and love confession from the other timeline? –Lashae
The timing for those two just never seems right, you know? And next up as an obstacle is Iris’ new editor, Scott Evans. “There’s a bit of a romance that starts to happen between them,” Candice Patton previews of her and Tone Bell’s characters. “It’s more on his part than hers, but it’s the first time that Iris starts to deal with moving on from Eddie’s death and being open to the idea that maybe her heart can finally move forward. The Scott Evans character is really the catalyst for that.” Which, in the long… run… could service WestAllen!

Any scoop on Criminal Minds? –Emilie
The series’ landmark 250th episode kicks off a two-parter of sorts. Directed by Joe Mantegna and written by Bruce Zimmerman, “Sandman” (understandably) features an UnSub who sprinkles sand in his victims’ eyes. And that’s not even the worst part! “It’s pretty brutal but it’s amazing,” says showrunner Erica Messer. “And it’s got a great cliffhanger element to take us into [Episode] 251,” directed by Matthew Gray Gubler and titled “A Beautiful Disaster.”

Any Castle scoop? —Fred
Though Episode 15, titled “Fidelis Ad Mortem,” largely revolves around sending Beckett back to the police academy at which she trained, “There also is fallout from the [preceding] L.A. episode, with regards to Castle’s discovery about his missing time,” says co-showrunner Alexi Hawley. BONUS SCOOP: In a springtime episode, a series regular character will emerge as a person of interest in a murder, ultimately setting the stage for a possibly significant life change. 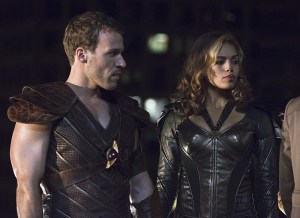 you’ve got on Legends of Tomorrow! —G.G.
Ciara Renée, who plays Hawkgirl, raised a provocative question when I visited the set last week and asked about the rules of reincarnation. “[Kendra] would have to die first in order for [Carter] to be reborn,” she said, echoing what Marc Guggenheim told me. “But the interesting thing — which I don’t really know the answer to — is: What happens if she does kill Savage and Carter’s not alive? Do they stop reincarnating?? That would put her between a rock and a hard place!” (Though one would hope that the fate of Earth >>> True Love.)

Real questions, real answers. If you need the Inside Line on a favorite show, email InsideLine@tvline.com!  (With reporting by Vlada Gelman and Rebecca Iannucci)