An ancillary member of Team WTF is back in this week’s Sleepy Hollow, and while his return is clunky, everything that surrounds it is very promising, indeed.

In other words, think of the hour in terms of Adele’s troubled performance on Monday’s Grammys, where The Kindred is a discordant microphone bloop on the piano strings… but the rest of the episode is buttery goodness that warms you from the inside and leaves you wanting more.

Because if Ben Franklin’s Frankenstein becoming sentient — and really getting into collages (?!) — is what it takes for Abbie and Ichabod to grow closer (interpret that in whatever way makes you happiest), then I’m on board.

Read on for what happens in “Kindred Spirits.”

HELLO AGAIN | The hour opens with that twisty-flip camera shot we saw a few times in Season 1, and when the scene rights itself, we’re on lovers lane with a couple in a car. The guy gets handsy, then aggressive, and just as we’re about to veer into SVU territory, something huge and powerful breaks the glass and drags him out of the driver’s side window.

Just as the woman is about to thank her rescuer, he grabs her, too, and hacks her into many pieces. If you missed Season 2, here’s a quick catch-up: The attacker is The Kindred, the mystical creature made up of various stitched-together body parts — plus the Headless Horseman’s head — that Abbie and Ichabod raised to fight their nemesis; after the battle, The Kindred ran off and hasn’t been seen since. Apparently, he has not been eating shwarma all by his lonesome… but we’ll get to that in a sec.

ABBIE IN DENIAL | Over at Casa Witness, Ichabod wakes in the middle of the night to find Abbie sitting in front of their chessboard. She can’t sleep, but when he tries to get her to talk about her time in the catacombs, she kindly but firmly deflects, saying that all she had to deal with there was “painstaking boredom.” She thanks Ich again for being her “Wilson,” though I’m fairly certain the Cast Away reference is lost on him, and notes that he neglected all of her now-dead houseplants during her absence. Then she decides she’s going for a run. 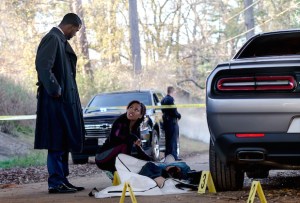 While out on the trail, Abbie (and her gorgeous natural hair — please, Sleepy Hollow, let’s see this look on Nicole Beharie more often. It suits her) pauses for a breather and is overcome by memories of her time away. Not as OK as you seem, eh Mills? But then Daniel calls: Even though she’s on leave from the FBI, he’d like her to consult on the third double murder in a week.

Once she hears the killer’s M.O., Abs immediately knows their galumphing pal is back in action. So she bails on Daniel, saying she’s not ready to work again yet — and learning he never handed in her resignation —then calls Ichabod to fill him in.

The call, though mission-related, is sweet: If you rewatch the episode, pay special attention to her face when he refers to their home as their “mid-Atlantic abode.” This scene, the checkers bit later — all of the Crane-Abbie interaction in this episode is aces… which maybe kinda sorta helps make up for the Kindred silliness. Speaking of which, let’s get that out of the way now.

KINDRED GOES COURTING | Long, Kindred story short: The creature Ichabod and Abbie roused last season is slowly growing human, and the reason he’s attacking couples is because he’s jealous of romantic connection/looking for a bride. How do the Witnesses realize this? Because they find a picture of a woman he crafted out of ripped pages from magazines.

Yep, The Kindred has a vision board.

Who knows what other kinds of goal visualizations they might’ve found in his lair? I picture him tearing apart old issues of Good Housekeeping and Men’s Fitness, deciding that yes, he IS going to include that photo of a muscle-y dude, because even monsters need a little #fitspiration. But where did he get a glue stick? And how did Team WTF miss the fact that a hulking abomination of nature was catching Zzzs in the very tunnels they traverse all the time? So many questions!

Anyway, Ichabod realizes that Franklin figured The Kindred’s creeping humanity would rear its head someday, so the founding father sewed together a patchwork “Kindress” to soothe him . Problem is, before the Witnesses can introduce the beast to his wife, he grabs Zoe — who’s in the process of an awkward breakup (if you can even call it that) with Crane — and runs off with her.

HAPPILY EVER NASTY | With the help of Sophie (and Franklin’s glass harmonium, which Jenny and Joe conveniently lift from a New Jersey opera house), Ichabod and Abbie bring The Kindress to life, save Zoe, then watch as the two undead beings suck face and then walk off into the night. “Well, that was odd,” Ichabod says, and not even a stellar Tom Mison line reading like that can save this part of the story. My biggest beef: Crane and Mills’ handwringing over how they inadvertently brought a sentient life force into the world… and then they do the exact same thing again, just in a skirt this time.

Anyway, by the time The Hidden One — who’d hoped to recruit The Kindred as his lieutenant and is irked that the beast is choosing his lady, instead — blows them both to bits, I’m ready for some more Witness bonding, pronto. But first, Daniel welcomes Abbie back to the FBI (after mentioning for the first time that he fell in love with her at Quantico), and Ichabod and Zoe have an amicable parting… with one key idea highlighted.

After Ichabod apologizes to the woman he neglected nearly as much as he did Abbie’s plants, he explains that maybe he’s just not ready for a relationship. She kindly says that he probably is ready for commitment, just not with her. (And here’s the part where those of you who railed so hard against Zoe might want to take a moment and think about the purpose she actually served in the narrative.) He bows, she bids him farewell, and that’s that.

BLOODY HELL | The hour ends with its best moment: Ichabod and Abbie, drinking beer and playing chess at home. She notes the cacti he has placed all around the apartment and asks if they’re a permanent addition. He says yes, because “we’re a succulent family now.” (Side note: That small “squee” you heard immediately following that line was likely bubbles escaping from the beer bottles and in no way emanated from me.)

When Abs accidentally slices her finger as she opens another bottle, and Ich runs to fetch her a bandage “from the apothacreeeeeeeeeee drawer,” she absentmindedly traces patterns on the table… in her blood… which she then realizes is a symbol she saw in the catacombs. She wipes it away before her partner returns, but there’s no way this is going away that easy.