Psychoanalysts, take note: I’ve got a new twist on an old diagnosis, thanks to Nick Burkhardt’s predicament in Grimm‘s midseason premiere.

I call it the Madonna-Hexenbiest complex.

It’s when you find yourself lusting after the newly human mother of your infant son, yet are simultaneously obsessed with finding out everything you can about your back-from-the-dead-and-still-a-literal-monster ex-girlfriend.

And if that weren’t enough for a Grimm to handle, the Wesen uprising hits its stride — and gets a name — and one source of guidance/help goes the way of the dinosaur.

How do Nick and the gang handle it all? Read on for the highlights of “Eve of Destruction.”

SHE’S BAAAACK | Moments after a platinum-haired Juliette saves Nick, Monroe, Wu and Hank from certain death by members of the Wesen revolution, she disappears. So Nick returns home and demands answers from Trubel, who swears she didn’t know the former-almost-Mrs.-Burkhardt was among the living. “All I know is she was alive when Chavez took her, but I didn’t know if she was going to survive what they were going to do to her,” the baby Grimm says apologetically, adding that Hadrian’s Wall wanted to “break” Juliette and turn her into a weapon.

Nick makes contact with Meisner, who informs him that “the woman you knew doesn’t exist anymore” but seems open to setting up a meeting between Nick and Juliette. While this is happening, the rest of the Scooby Gang slowly finds out that their old friend might not be as gone as they thought. “Is this another back-from-the-dead thing? Because I’m really not ready to host another Jack the Ripper party,” a shocked Rosalee says. “Let’s just hope it’s not something worse,” Monroe warns.

HELL TO THE CLAW | Meanwhile, Xavier confesses that the Wesen revolutionary group — which we learn calls itself Black Claw — has a “join or die” policy and is targeting Nick and his friends. Nick and Hank get the traitor put in one of the police department’s holding cells for his own safety… until a Black Claw operative infiltrates the jail and kills Xavier, then gets shot by an officer who’s freaked out that the Wesen woged right in front of him. (Another hallmark of Black Claw: They don’t give a Fuchsbau about who sees their true faces.)

Even worse: A Black Claw sympathizer guns down the entire Wesen Council, save one. The only council member to survive calls Rosalee to warn her, then narrowly escapes another hit on his life. 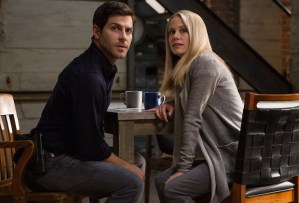 NO TIME LIKE THE PRESENT | Needless to say, things at the Burkhardt-Schade Bunker are a little messed up, what with Nick obsessed with finding Juliette and Adalind worried that Ju might come looking for ‘Biestfight Round 2. “It’s kinda hard to sleep after finding out that the woman who tried to kill me and you and helped the royals steal my daughter is alive and well,” Ad tells Nick, cramming more exposition into one sentence than I will fit in this entire recap.

But he reassures her that “Juliette being back does not change the way I feel about Kelly or you,” and later doubles down on that sentiment when she apologizes for basically four seasons of doing terrible things to him. “I had a chance for a normal life with Juliette — you gave that to me when you stopped me from being a Grimm,” he says, which is kind of like thanking a city bus for giving you time to relax when it hits you and leaves you in traction for months, but whatever.

Adalind is thankful for the out, but still says she wishes she could take back everything she did to him — “except for Kelly,” a sentiment he echoes. Then they kiss, and thank GOD; given the incremental pace of that storyline, I thought Kelly was going to be in law school before his folks locked lips. Side note: What I like best about this development is how in-character it seems when Adalind immediately says, “That was so not a good thing to do,” and how they both tacitly acknowledge the hot weirdness of the moment. Nick looks ready to go in for another, but then Trubel shows up with the news that he’ll see Juliette later that day.

STRANGERS IN THE FIGHT | So Nick meets Juliette at a restaurant, where she’s keeping a close eye on a table near the front. She’s wearing that platinum wig again; I know Bitsie Tulloch has said that Eve needs to be protected from those who might recognize Juliette, but wouldn’t it make sense for her to have a less attention-grabbing hairstyle? “They call me Eve… because I’m starting over,” she says, emotionless, to Nick. “They saved me, and I saved you.”

Though Burkhardt has tons of questions, she ignores nearly all of them. And when the men at the table near the front get up, she pulls her hood up over her head, woges and uses her hands-free powers to squeeze the dude until blood gushes from his ears. He dies. As she flees, Nick takes out the guy’s Wesen henchmen, then fields a call from Meisner: The dead man was a Black Claw organizer, and the whole evening was a test for Nick. The frustrated Grimm wants more info, but Meisner just says he’ll be in touch.

At the end of the episode, we see Juliette return to her cell at Hadrian’s Wall’s bleak headquarters. The blonde ‘do is fake (thank goodness); her cold-hearted badassery, it appears, is the real deal.

Now it’s your turn. What did you think of the episode? Grade the premiere via the poll below, then hit the comments to elaborate!