If the now-cancelled ABC drama Forever had been gifted the same immortality with which its protagonist was cursed, Henry Morgan’s life would’ve gotten very busy in Season 2.

How do we know? Because executive producer Matt Miller, who in September offered fans a glimpse at Henry’s future, took to Twitter once more on Tuesday evening to answer fan questions about his beloved-yet-blighted series. The occasion: the series’ DVD release.

Many of the queries involved the fates of Dr. Morgan, his burgeoning love interest Det. Jo Martinez and Henry’s trapped-in-a-waking-coma nemesis Adam. Though Miller said no Season 2 scripts had been written, the story arc had been mapped out — and he teased the notion of Henry’s other family, a romantic fling for the good doctor, Adam’s resurgence as a threat and more.

* Despite Forever sharing a network with Castle, there was no chance for a crossover event. “Couldn’t, because Castle was ABC Studios and we were WB Studios,” Miller wrote.

* Henry would’ve had a romantic dalliance in Season 2 with another immortal, “someone that was much, much younger than him.”

* The title of the series finale, “The Last Death of Henry Morgan,” wasn’t literal — Ioan Gruffudd’s character still would’ve been immortal in Season 2. “Just having fun with the audience,” Miller wrote.

* Adam — who, when the series ended, was effectively dead via “locked-in syndrome” that Henry caused — would’ve received a “death/rebirth” when someone unplugged his life support, Miller wrote… and that mystery person might have been the aforementioned third immortal.

* And while we’re on the topic of Adam: Burn Gorman was the only person who ever played him, even back in the phone call in the pilot.

* The wife with whom Henry had children (divulged during Miller’s initial tweetfest) was Spanish — a “Latin lover.”

* Jo’s criminal dad, and her upbringing as a delinquent-in-the-making, are what eventually led her to want to uphold the law. “She decided she wanted to be the opposite of her father,” Miller wrote. 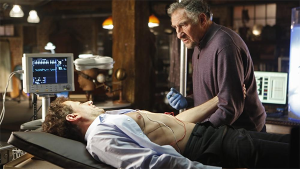 * Lorraine Toussaint’s Lt. Reece would’ve had more to do in Season 2, but her role (which was often cut for time) is more fleshed out in the Season 1 DVDs.

* Sorry to end on a downer, Forever fans: Per Miller, a wrap-up movie is “probably not in the cards.”

Do you have lingering questions about Forever that Miller didn’t answer? List ’em in the comments!