Like a fine cup of steaming wassail, you might want to savor Michael Bublé’s newest NBC holiday special, Christmas in Hollywood… because there’s a good chance it’ll be his last.

“I don’t want to say for sure, but at this point, for me, it’s really hard,” the Canadian crooner tells TVLine, noting that the amount of work that goes into each special — as well as recording and touring to promote his music career — hasn’t lessened since his first special in 2011. When you consider that he and wife Luisana Lopilato have a 2-year-old son and are expecting their second child, he says, the decision becomes a lot clearer. 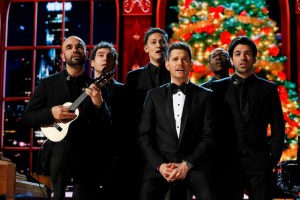 This year’s concert features Dion as well as Sharon Jones and the Dap Kings and up-and-comer Tori Kelly; like last year’s installment, Bublé and his band do an unplugged holiday medley of songs suggested by followers of his social media accounts.

“It ended up being great,” he says.

Though Bublé may not plan to unwrap any more holiday specials in the future, he says he’s not counting out other TV projects — maybe even one with Lopilato, an Argentine actress — by his side.

“I would never do a reality show, but if there was a camera on us, you would die,” he says, laughing. “Because it’s like I Love Lucy… except I’m Lucy.”

Whatever shakes out, though, he’s never forgotten the lesson he learned while acting as an extra during The X-Files‘ third season.

“I swear to god, I was starving and I grabbed a hot dog off the craft services table,” he says, laughing. (For those not in the know, extras aren’t usually allowed to touch food put out for a series’ regular cast and crew.) He was fired on the spot.

“And this woman said I would never work again in Hollywood. I would be blacklisted and I would never, ever work in the business!” he says, laughing harder.