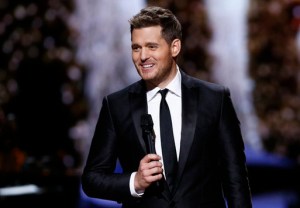 It doesn’t matter, hours into the taping of his upcoming NBC holiday special, that the cameras have stopped rolling while the crew deals with a technical snag: Michael Bublé is standing center stage in front of a live audience at Radio City Music Hall, and that means Michael Bublé is on.

The Canadian crooner uses the downtime to goof with the crowd, who’ve gathered in late October to watch his Christmas in New York take shape at the iconic Manhattan venue. At one point, apropos of nothing, he belts out, “You know my mama she told me don’t worry about your siiiiiiiize.” One or two members of his 30-ish piece band pick up the musical trail, and pretty soon everyone’s joining in as Bublé does a few bars of Meghan Trainor’s “All About That Bass.”

Bublé is gracious. He is funny. He’s a joker. But he is also very serious about making the special — his fourth for the network — must-see holiday TV.

“It’s a great joy for me. It’s fulfilling for me. But I’d be lying if I didn’t say that it’s probably the most challenging thing that I do each year,” he tells reporters during media time before the taping. 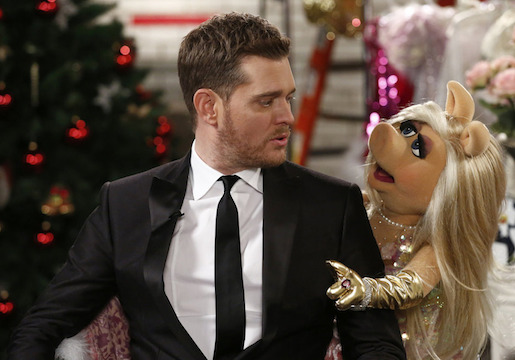 To that end, he enlisted several divas to help him usher in the season: Barbra Streisand, Miss Piggy and pop star Ariana Grande, who’s warming up in the hall while Bublé holds court with the press in the mezzanine lobby.

Bublé calls Grande “the real deal” and adds that when he called her to ask her on the show, “I loved her within the first five seconds. We had a lot in common.” His praise seems even higher when you consider how he describes working with one of last year’s guests, Mariah Carey.

“Mariah was great, but you know. Mariah is Mariah. She’s this beautiful, wonderful diva. What can I tell you? Ariana Grande just showed up three minutes early, she knew the whole song perfectly.” (Grande and Bublé duet on “Santa Claus Is Comin’ to Town,” and she takes a solo run at Wham!’s “Last Christmas.”)

“She couldn’t be kinder and more professional,” he adds. “If I was a fan before, you can times it by a million now.” (During the taping, his estimation seems to hold up: When a second take of the duet is called for, Grande laughs as she explains that “I’m not allowed to call Santa ‘creepy’ this time,” and when she’s done shooting, she walks around and personally thanks each member of the orchestra.)

In addition to big-name duets and a slick opening taped piece that inserts Bublé into well-known Christmas movies — courtesy of the team who merged Oscars host Billy Crystal into various nominated films — the hour-long special also features an acoustic set inspired by the singer’s… Instagram account? 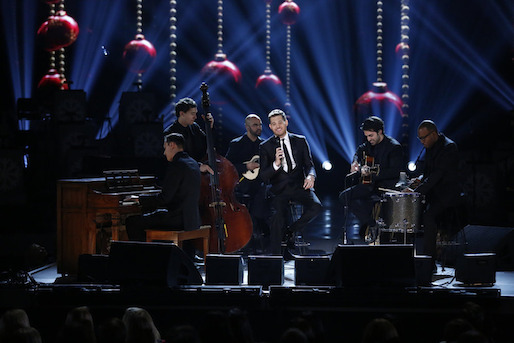 “Every night, before my show, I do these videos,” he explains. The 15-second clips show Bublé and his band warming up by performing a popular song. When he realized his fans dug it, he asked them to post requests of songs in the comments, which has resulted in snippets of covers as varied as George Harrison’s “My Sweet Lord” and Sir Mix-A-Lot’s “Baby Got Back.”

Why contain the crowd-sourced fun to social media? Bublé thought. So he polled his followers for Christmas suggestions, some of which — like his original tune “Cold December Night” and the classic “I’ll Be Home for Christmas” — made it into the hour.

“Two hours away from doing this on stage, and I have not rehearsed [the acoustic set] at all,” Bublé tells reporters, laughing. “I have no clue what we’re about to get into.” [Spoiler alert: Aside from a slight block on the final words of “Here Comes Santa Claus,” Bublé and his guys nail it.]

But the Grammy winner is sure that he has no desire to follow Neil Patrick Harris‘ or Maya Rudolph’s lead and head up a regular variety show.

“The truth is, if I’m going to perform, I’d rather do it in the capacity of either a singer or an actor. I’d rather go and do a movie or write a sitcom for myself than to be a host, because I’m not a host,” he says. “I’m an entertainer.”