If TVLine were an episode of Quantico, this would be the point in the episode where Alex deduces that we’re hiding something — and she’d be right.

Fresh off last night’s huge episode (Miranda attacked! Caleb screwing around with Scientology! Ryan on a ‘copter! Alex in FBI custody!), we’ve got even more intel about episodes ahead.

Read on for quick answers to five lingering questions, straight from executive producer Joshua Safran. And if you haven’t already, don’t forget to check out our post mortem with him, as well.

WHAT WAS SIMON’S PHONE CALL WITH OREN ALL ABOUT? | You’ll remember the Hasidic Jewish man as the wire specialist with whom Simon conferred in the present-day storyline; he’s the person who informed Alex that the wire found at her apartment was made by Shelby’s family’s company. Safran won’t give us the exact nature of the men’s relationship, or whether it began during Simon’s time in Israel, but he offers this: “I will say that story comes to a rapid boil very fast.”

WHERE IS RYAN’S HELICOPTER GOING? | Alex tricked a wounded Ryan into taking The Unknown’s chopper to safety while she moved forward with turning herself in. But will Booth go along with the plan? And where does the ‘copter wind up? “I can tell you that where it’s headed, it doesn’t make it,” Safran says.

WAIT, CALEB WAS IN A CULT? | Yep, Safran says, young Haas was being painfully honest in that Quantico-set scene with Shelby. “It’s a rare character that will use their vulnerability as a lie on this show. When people really get to the truth, it’s the truth.” 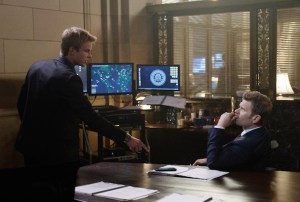 SO THAT SHELBY-CLAYTON THING ISN’T AS SERIOUS AS WE THOUGHT? | It would appear not, given the email that Caleb sees while scrubbing his dad’s account. “That’s a season-long story that we’re telling,” the EP says. “You see the beautiful scene where Caleb’s opening up to Shelby intercut directly with him never wanting to speak to her again, and you feel how sad that is. To me, that’s the stuff that gets us the most excited about the show.”

HAS CHARLIE JOINED WITH A TERRORIST GROUP? | Before you decry Miranda’s son for bloodying his mom and running off to do terrible things, “There are many, many possibilities that what you think happened didn’t exactly happen,” Safran says. “That’s the story we’ve been telling with Miranda all along: How well does she know her son? But more than that, it’s the way in which what she believes is challenged by what she might not want to see.”