Sunday’s Quantico simultaneously gave terrorism suspect Alex a tiny sliver of hope — though she doesn’t know it yet — and put her in the most precarious situation we’ve seen so far.

The hour saw Caleb find (and then, at the behest of his father, bury) the first evidence supporting Agent Parrish’s innocence in the Grand Central bombing. And later, realizing that the feds were closing in after last week’s shootout in Queens, Alex tricked an injured Ryan into boarding a helicopter to safety, then walked into FBI Central to turn herself in.

As executive producer Joshua Safran promised in October, the episode answered several questions. Among them, we learned that the secret shame shared by Alex’s dad and Liam involved a botched terrorism investigation in Omaha in the 1990s and that Shelby’s half-sister in Saudi Arabia really exists.

Read on as Safran offers insight into Alex’s new plight, the FBI’s hunt for the next bomb,the Simon-Raina-Nimah twin dilemma and the Caleb curveball of which Tom Cruise might approve.

TVLINE | Now that Nimah and Raina are out to all the recruits, it looks like Simon is more into Nimah, but Raina’s more into Simon.
Yes, exactly — or she was, until she watched how Simon cared less about her, because he was more interested in being surprised by Nimah than he is in the connections that he had formed with Raina. Because Raina knows when she was in the room with Simon, and Simon just doesn’t really know that. 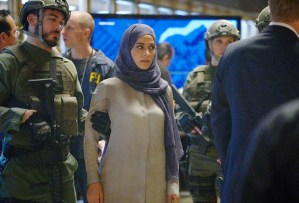 TVLINE | I’m assuming that this whole situation leads to whatever falling out the twins and Simon have between Quantico and when we meet up with them again.
Oh, yes. That is on the near horizon.

TVLINE | Clayton is looking pretty dirty by the end of the episode, given that he’s holding back the only proof that might help Alex clear her name.
It’s not so much “dirty” as it is he’s protecting his own ass… It really is just about the way in which he selfishly puts himself above the needs of the many.

TVLINE | Miranda’s son Charlie goes missing at the end of the hour, and we’re led to believe that maybe he’s running away to meet up with the group she feared. But we don’t actually see him leave. Is there a possibility what we think happened didn’t happen?
You’ve watched television before, haven’t you? [Laughs] Yes. There are many, many possibilities that what you think happened didn’t exactly happen, and I think that’s the story we’ve been telling with Miranda all along: How well does she know her son? More than that, it’s the way in which what she believes is challenged by what she might not want to see.

TVLINE | Their secret turned out to be a lot less nefarious than I was expecting.
We were very interested in how small acts ripples out through your life and gets bigger and bigger and bigger. And that’s actually not a small act. I mean, 200 people died, as we hear about in this episode, and that blood isn’t directly on Liam’s and Michael’s hands, and others, but it did touch them, and they just couldn’t live with that…

It really was always about dealing with an event that sits inside you, and how some people can be OK with it, other people turn to drink like Michael did, and other people try to pretend it never happened, like Liam had.

TVLINE | Is that the same organization Caleb referenced in his conversation at Quantico with Shelby?
I can’t tell you that! [Laughs]

TVLINE | That bullet-removal scene with Ryan and Alex was grueling.
I know. I hope nobody turned the TV off. That was my Scandal, Khandi Alexander moment, when she gnawed off her wrist. I remember watching that, being like, I can’t turn my eyes away from this, but I never want to see this again.

TVLINE | At the end of the episode, we watch Alex walk into FBI Central, saying there’s another bomb hidden in New York. Is there someone on a high-ranking level who maybe believes her, but is playing it cool for the time being?
It’s almost as if you have read future episodes. [Laughs] In the very next episode, the question of who in the upper ranks of the FBI is on Alex’s side — and who is defiantly not — is very clearly answered.