The Royals kicked off its second season Sunday, ushering in the era of King Cyrus and exposing more dark truths about the Henstridge family’s reign. (Side note: Am I the only one craving swan up in here?)

TVLine spoke with the E! drama’s stars — Elizabeth Hurley (Queen Helena), William Moseley (Prince Liam), Alexandra Park (Princess Eleanor), Tom Austen (Jasper) and Jake Maskall (King Cyrus) — for the scoop on what the rest of Season 2 has in store for us, but first, a quick recap of Sunday’s events:

Still reeling from Simon’s death, a single Eleanor — sorry, Jasper, but “mother’s vagina” really is a deal-breaker — re-embraced her party girl ways before reuniting with Beck; Helena blackmailed an innocent young suitor into romancing Cyrus’ freak-show daughters; Prudence and her “barely palatable poon” returned to (unsuccessfully) extort her baby daddy; and the Duchess delivered some foreboding words to her daughter: “We killed one of theirs, they killed two of ours. The question is: What do you plan to do about it?” (Seriously, though, who set the freakin’ lawn on fire? Not cool, guys!)

THE HEIR IN THERE | Following the finale’s baby bombshell, a very pregnant Prudence revealed herself to Cyrus this week — their first of several uncomfortable encounters to come. “There’s a lot more revealed about [Prudence’s] personality, her ambition and the lengths to which she’ll go to protect the bun in the oven, as it were,” Maskall explains. “We have a great storyline, and I say some really nasty things to her. I’m vile!”

ISN’T IT BROMANTIC? | With Marcus out of the picture, Liam got a new bodyguard (and potential new BFF) in Jasper during the premiere. “It’s very man-on-a-mission,” Moseley says of the duo’s plan to bring Simon’s killer to justice. As for their developing dynamic, Austen explains, “Marcus and Liam had that buds thing from the get-go. Liam and Jasper aren’t necessarily buds to begin with, but that definitely develops.” 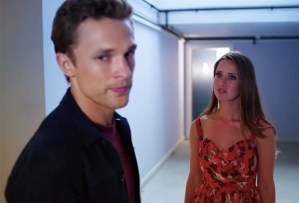 NO-PHELIA | Despite Ophelia’s brief appearance in the Season 2 trailer, there was no sign of Liam’s ex-girlfriend in the premiere, and it doesn’t sound like we should be holding our breath for a big, romantic reunion. “Ophelia will always have a special place in Liam’s heart,” Moseley says. “It’s one of those star-crossed romances. Her world and his world just don’t go together, sadly, and he had to make a decision for his family. He had to put his love life and his personal interests aside. Obviously, there’s always hope, a feeling that the past will come back — but right now, it’s just not the right time for Liam.”

BODY(GUARD) HEAT | Speaking of relationships, don’t expect to see Eleanor cozying back up to her former bodyguard anytime soon. “People say they want them together, but I think what people enjoy more is watching them try to figure out if they can be together,” Austen explains. “That’s what a lot of this season is about, the two of them figuring out if this is something that’ll ever work. Jasper starts the season believing it’ll be easy, but he finds out very quickly that it won’t be.” Adds Park, “She’s pretty angry with him, and she tells him to leave her alone, but she enjoys that he’s staying nearby.”

And while we’re on the subject of party-girl Eleanor, watch Park and her co-stars explain to TVLine the process of filming those infamous weed/coke scenes of which we’ve all become so fond:

DUCHESS OF DRAMA | Lastly, there’s a lot more to Joan Collins’ devious Duchess than we know, and Hurley can’t wait for the audience to finally be clued in. “Helena tells Eleanor a lot about her background this season, both with her mother and about how she came to marry the king,” she teases. “In doing that, we find out a lot about the Duchess. In Season 1, everyone thought she was fabulous; no one knew why she has such an aggressive relationship with Helena. I have a line where I say, ‘I’ve waited 30 years for this moment — for the people to finally know who my mother is.’ And you get to know by the end.” Adds Maskall, “It’s a great reveal.”

Your thoughts on The Royals‘ premiere? Hopes for the rest of the season? Grade Sunday’s episode below, then drop a comment with your full review.