The Bones/Sleepy Hollow crossover, like any TV “event,” was one heck of a trick to pull off. Good thing it was also — particularly its second hour — quite the treat.

The Sleepy side of Fox’s Halloween-themed evening was a solid episode that entertained, stayed true to its characters, caused a few laughs and even managed to forward the season’s overarching story. What more could a Hollow heart want? (Well, maybe Ichabod in a slightly more inventive costume…)

Let’s put it in the sweet terms of this holiday season: The crossover was a full-size Twix bar in a situation where we would’ve been happy with a fun size 100 Grand and would’ve accepted anything above a mystery flavor Dum-Dum.

So without further ado, let’s hit the highlights of “Dead Men Tell No Tales.” (To read our recap of Hour 1, click here.)

NO BONES ABOUT IT | Pandora intercepts Gen. Howe’s bones, which are on their way from Bones‘ Jeffersonian to Sleepy Hollow. After disposing of the driver, she opens the coffin and tosses a medallion onto Howe’s ribcage. “Eternal rest is for unimportant men,” she breathes as the general slowly becomes covered with desiccated flesh and eventually sits up. “I offer you vengeance on a hated enemy who once tries to end your life,” Pandora says. “Craaaaaaane!” the reanimated Howe says.

At that very moment, Team WTF is bowling, in costume, on Halloween, and it’s pretty great. Jenny is a Canadian Mountie, a fun nod to Lyndie Greenwood’s nationality. Joe is a bloody doctor. Abbie is “Flawless” video Beyoncé (or “Abbeyoncé,” as my colleague Matt Mitovich coined her). And Ichabod is… “John Adams!” he says, incredulous that no one is able to guess based on his waistcoat and buttons.

Truth be told, he just looks like Ichabod wearing a vest. But Crane’s ego is soothed when Zoe, dressed as Betsy Ross (aka “hoop dreams,” per Abbie), immediately picks up on the Adams vibe. Ich is just returning to his friends — I love Jenny’s “Swagger!” comment — when his phone chimes with the news that Howe’s body never arrived.

CRYPT CREEPERS | So the Witnesses ditch their costumes and go on a hunt that eventually leads them to a mausoleum filled with the bones of British soldiers. While they walk through the darkened halls, she teases him about his hesitance in asking Zoe out on a date and brings up the fact that he might be afraid of having his heart broken all over again. They speak quietly, dare I say intimately?, their faces partially hidden by the shadows; the short exchange is Ichabod and Abbie at their best. Too bad it’s interrupted by one of Howe’s newly raised zombie soldiers tossing a dead teenager at their feet.

Abs and Ich eventually escape the decomposing horde; back at the archives, Crane lets her know that George Washington once sent him to kill Howe, but “I failed in my mission” and the invasion of Manhattan continued the way we now know it. But with Mills’ coaching, Crane remembers a medallion Howe was fondling at the time of his botched killjob, and that leads them to learn that the way to defeat Howe and his army of the undead lies in his first burial site. But where was that? 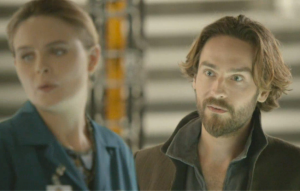 Time for some help from Booth and Brennan! Ichabod and Abbie drive a small sampling of Howe’s bones down to the Jeffersonian, where Brennan finds that the general was originally interred in a tomb underneath the Capitol building. (There’s a fun moment where Brennan shocks Ichabod by talking about sex with Booth — again — and now it’s Crane’s turn to give her the squirrel eye (photo at right).

ALL FIRED UP | Even though little Christine’s Jane Goodall costume isn’t quite done, her folks can’t resist tagging along as Abbie and Ichabod hit up the Capitol for some zombie-killing intel. So, field trip! Crane’s Masonic ring helps them gain access to a secret room that contains Howe’s original crypt… and then a wall crashes down, cutting Abbie and Booth off from Crane and Brennan. Oh, and there’s “Greek fire” aka napalm about to rain down on them from the ceiling.

Booth shoots the lock, which frees Brennan and Ichabod, and the entire experience leaves Brennan anthropologically geeking out about how much there is to learn from the secret chambers. Abbie thinks that the forensic pathologist’s glee will get in their way, but Crane isn’t worried. “Her skepticism is interminable,” he says. “She’d dismiss Moloch as a tall man with a skin condition.” (Ha!)

TRICK-OR-BOOM! | Back in Sleepy Hollow, Howe and Pandora (is that monstrous look her true face?) roam the streets on Halloween, with him assembling his nocturnal cadre just after dusk. Everyone thinks they’re some kind of “Thriller” dance flash mob or something until the soldiers prepare to fire… and are thwarted by Abbie and Ichabod pulling the car right in front of them. There are fights and chases, and eventually Ichabod leads Howe and the zombies down into the tunnels, where Joe and Jenny — and eventually Abs, when she catches up — blast them with shots of Greek fire, the same way Betsy Ross stopped them during the invasion of New York.

Finally, it’s just Crane and Howe, but the general won’t give Ichabod the satisfaction of killing him. Calling Crane a “turncoat,” the dead baddie willingly steps into a wall of Greek fire and crisps himself right outta existence. I know he’s a terrible creature, but you’ve gotta give him a little respect for being such a badass, no?

After a little Skype wrap-up with Booth and Brennan, Abbie gives her fellow Witness a little push, and he takes it: He nervously flaps his hands, calls Zoe and asks her to dinner.

WAS CORBIN IN CAHOOTS WITH…? | Abbie’s ending? Not so happy. After being called into Daniel’s office thinking she’s officially getting asked to be a task force leader on a huge takedown, she is instead made to answer for some surveillance photos of her sister and Joe talking to Sophie, the shady lady from whom they recovered the Shard of Anubis. Sophie’s boss, Atticus Nevins, turns out to have been one of August Corbin’s war buddies and a black market agent buying up illicit items from abroad — which has put him on Daniel’s radar. So Jenny and Joe end the episode with Sophie trying to get them a sit-down with her superior, and Abbie ends up getting a dressing-down from hers.