Here’s the weirdest thing about the long-heralded Bones/Sleepy Hollow crossover: It’s just not that weird.

I say that with a sense of pleasant surprise — and a lot of relief. As a formerly ardent-now-casual fan of Bones and someone who covers Sleepy Hollow for TVLine, I feared that the two-hour event would distill the quirkiest aspects of Brennan, Booth, Mills and Crane. (“Look at Ichabod gaping at Brennan’s mass spectrometer!” “See Booth and Abbie get into a pissing match about Bureau protocol!”)

That tactic, however, would overlook that both series are about a handful of oddballs with a whole lotta heart.

Thankfully, by the end of the first hour, that doesn’t seem to be the case. In fact, the crossover’s opening act is a typically constructed Bones episode in which Ichabod and Abbie are integrated into the action as smoothly… as someone wearing colonial era clothing can blend into any modern setting.

Read on for the highlights of “The Resurrection in the Remains” — then make sure to come back later for a recap of the second hour.

WELCOME TO D.C.! | Kids preparing for a Halloween kegger at a dilapidated church accidentally fall through some rotting floor boards, discovering the partially decomposed body of a 30-something woman below. (Side note: Ugh, maggots. I forgot how much this show loves maggots.) When the Jeffersonian team is called to the site, they realize the body is actually on top of an iron coffin containing the headless corpse of a high ranking Revolutionary War-era British soldier.

The female body is identified as a missing med student named Sarah Lippman, who’d recently radically changed her look. A search of Sarah’s locker reveals that she was kind of into witchcraft, and a mark on the cover matches a mark on the iron coffin.

“Is it just me, or is something otherworldly going on here?” Hodgins asks Brennan. “That sounds like our department,” Abbie interjects from the door, Ichabod standing behind her.

Ichabod is a Revolutionary War captain who was killed on the battlefield by Abraham van Brunt, his former best friend who’d been conscripted into doing a demon’s handiwork. But at the same time Ichabod went down, he lopped off Abraham’s head. Both men died and, thanks to some magical mumbo-jumbo, were revived a few years ago. Since then Abbie, who is a new FBI agent, and Ichabod have discovered that they are the Biblically foretold Witnesses of Revelation who will fight against the end of days. Oh, and Abraham? He’s the Headless Horseman you’ve heard so much about. Here endeth the lesson.

Abbie and Ichabod want the bones brought back to Sleepy Hollow, but Brennan says he’s not going anywhere until the mystery is solved. And soon after, they realize that the old dead guy is actually Gen. Howe, a “blaggard” (per Crane) who commanded the British army during the American Revolution. 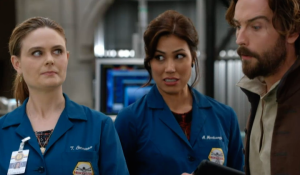 “We have stumbled on a mystery of the highest magniturde, and I shall not rest until it is solved,” Ichabod vows, as Angela and Brennan look at him (photo at right) like, “Uh, OK. That’s what we do here literally every day, but sure.” Anyway, that gives everyone plenty of time to:

* Make fun of Ichabod’s clothes: When Hodgins references Ichabod’s duds as “cosplay,” Crane shoots back, “Do I look as though I have just beamed from the planet Vulcan?!”

* Learn about past connections: Abbie is surprised to find out that Booth knew her mentor, August Corbin, and that they’d discussed her.

* Make socially inappropriate comments: Ichabod describes his relationship with Abbie as “a partnership of opposites, yet our affinity for each other bears the ripest of fruit.” When Brennan assumes that means they’re sleeping together, he hastily corrects her. “Then I suggest you consider it,” she says, eyes gleaming as she clearly pulls up a mental picture of what Booth looked like stepping out of the shower that morning.

CHEERS! | Let’s tie up the Case of the Week. Prompted by her sister’s passing, Sarah wanted to know what happens when you die. So she nabbed Howe’s skull, which she thought had life-restoring abilities — and she had a med school friend help kill her and bring her back via some powerful drugs. (Side note: Has she never seen Flatliners? Could’ve saved herself a lot of trouble.) The experience changes her life, hence the total makeover, but when she gets her boyfriend to try it, he experiences nothing like the nirvana she promised. The episode so shakes his religious faith that he “snapped,” he later confesses to Booth and Mills, and used Howe’s skull to bludgeon his girlfriend. “Before I knew it,” he says remorsefully, “she was gone.”

And with that mystery solved, our favorite foursome head to the Founding Fathers for a celebratory drink. Booth and Brennan bounce early, though, so pretty soon it’s just Abbie and Ichabod and Ich’s girly drink at the bar. Benjamin Franklin really invented Sex on the Beach? Abbie queries, unable to keep her smirk to herself. “He called it ‘Fondle in the Forest,'” Crane replies, equally silly.

Drop a quick comment about Hour 1 below, then proceed directly to our recap of Hour 2!