Girlfriend shows up in town last episode, and already she’s harnessed a secret-sucking shadow monster that — however inadvertently — gets the Witnesses to confess their darkest confessions to each other? And that treevil she’s growing in the ruins should be ready to take over the town in, what, two more episodes? (Take that, Henry and your season-long tinkering with that silly model town!)

All I’m saying is, the Third Tribulation better get to the bullpen and start warming up its arm, because Ol’ Boxy-but-Bad works quickly. Luckily, so do Abbie and Ichabod. Read on as we review what takes place in “Whispers in the Dark.”

HELLO, ROOMIE | Ichabod sings a jaunty tune whilst cleaning Abbie’s house; he’s so thorough, he even gets all up in her laundry — including her hand-washed unmentionables. He’s holding a see-through chemise up for closer inspection when she surprises him, and as usual, Ich is very funny when he’s flummoxed. We learn that he’s got a room at Abbie’s place, and they’re living together until he can find a place of his own. (Side note: Am I the only person who, based on what we’ve previously seen, assumed Abbie had an apartment rather than a house?)

After Crane burns dinner (if we’re ranking Crane curses, “God’s teeth!” is right up there with “God’s wounds!,” no?), the Witnesses’ take-out feast is interrupted when Abbie gets a call about a death. Aw, I just realized Abbie and Ichabod are eating Chinese together again, guys!

MEET THE NEW BOSS | About that dead guy: He was an accountant at the county comptroller’s office, and he was on hold with the FBI when he had a heart attack at the local train station. Abbie’s investigation hinges on the call: Why did he so desperately need to talk to an agent? While she and Crane are investigating the scene, a good-looking guy in a suit arrives and a surprised Abs introduces him to Crane as Daniel Reynolds, her old classmate (and, we later learn, hook-up) from Quantico.

Daniel is there to take the regional chief position vacated by a very dead Agent Granger. It’s clear Abbie wants Ichabod outta there so she and Daniel can catch up, and the nearly imperceptible way Nicole Beharie breathes, “Mmm-hmm” when Icahbod asks if he should go is one of those throwaway moments I love so much (and missed dearly last season).

Outside the station, Ichabod notices some odd shadows and harsh whispering in the air, then he bumps into Pandora who apparently has chosen “flamenco hipster” for her persona this episode.

WRAITH, WRAITH DON’T TELL ME | Back at the archives, Abbie and Ich hear the same scary whispers in the background of the victim’s aborted phone call; when the signal is cleaned up, the terribly creepy voice says, “Secrets! I will kill!” This jogs Ichabod’s memory re: something in Grace Dixon’s journal, which brings us to a flashback involving Gen. Howe, Ichabod undercover and Betsy Ross in her britches. 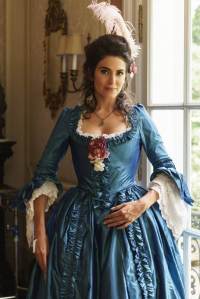 As it turns out, Howe conjured a “whispering wraith” and yoked it to a turncoat colonial soldier named Marcus Collins in order to learn the secrets of Washington’s spies. It killed two agents embedded in Howe’s camp, and it nearly got a third — Betsy Ross, in her skivvies as a result of how she “handled” Howe. Ichabod managed to extract the seamstress/spy just before Marcus frightened her to death, too.

The Witnesses realize that the wraith killed the FBI caller in similar fashion; they then deduce that he had a secret he was keeping with some others, and the creature is likely putting those others in danger. Some more digging reveals that the caller and his co-workers knew their boss was embezzling funds from county employees’ pension plans, but when Crane and Mills try to warn a second whistleblower, he winds up dead and the wraith works its mojo on the Witnesses.

A TIME TO SPILL | Ichabod later confesses to Abbie the secret the ghostly being dredged up for him: He was captured by Howe and offered absolution for his treason if he’d only give up the names of Washington’s covert operatives. He didn’t do it, of course, but he thought about it for a second, and the shame has dogged him for centuries. He tells all of this to a rapt Abbie, but when it comes time for her to reciprocate, she gently redirects the conversation.

Which brings me to Mills’ “good fences make good neighbors” edict to Crane, whom she also bats away from her personal affairs when he starts to pry about Daniel. Abbie, you can keep your sister out of your business. You can keep your boss out of your business. But you can’t — and shouldn’t — keep Ichabod Crane at arm’s length. This is the same man whose dying, demon-spawn-carrying wife you cradled while he wept and performed CPR. This is the same man who saw you wearing little more than a sports bra and a scorpion after you’d known each other for all of two days. This is the same man who fished you out of a library fishin’ hole, who hugged you so hard in Purgatory, who tearfully clasped your hand as he chugged Masonic poison and who submitted himself to the ignominy of skinny jeans at your behest. For (actual) God’s sake, the flipping BIBLE foretold of your friendship!

To sum it all up: Abbie, your fellow Witness is the very person to whom you should reveal the deepest truths of your soul. I’ll be interested to see if the new living situation brings down any of those walls of yours.

THE PRESSURE OF A NAME | Crane and Mills grab the victim’s second co-whistleblower before the wraith can, and when the creature comes looking for her, they realize that Betsy was able to escape him back in the day because she called him by his true name: Marcus Collins. Uh, OK? So Ichabod literally calls out the wraith, who becomes corporeal in a Jack Skellington kinda way and soon winds up with a giant, fatal puncture wound to the chest.

On the porch later, Ichabod muses about how having Abbie by his side “is the greatest boon,” and how good it feels to finally have his Howe confession out in the open. She finally caves under his not-subtle pressure and says that her secret is that she found her father — who’s still alive and living in Saratoga, N.Y. — and she kind of stalks him sometimes but hasn’t gotten up the courage to talk to him. She also hasn’t told Jenny. 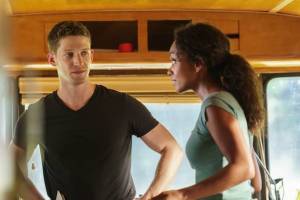 JOE IN THE KNOW | Speaking of the other Mills sibling, Miss Jenny spends much of the episode with Joe Corbin, who desperately wants her and Abbie to let him in on their supernatural work so he can better understand his dead dad. She pushes him away… until he’s kidnapped by a tall drink of yum named Randall who really wants to get his hands on a supernatural artifact in Jenny’s possession. Jenny kicks a little butt, hands the piece in question over in exchange for Joe’s safety, then reluctantly agrees to anoint Baby Corbin as the newest member of Team WTF.

THINK OUTSIDE THE BOX | While Ichabod is wrapping up a meeting about making the archives a historical site (and therefore impervious to mini-malling), he realizes that the train-station coffee shop he saw Pandora come out of never really existed. (Side note: That low bow, though.) When he alerts Abbie to the folie a deux, and points out Pandora on the security footage, she recognizes her as the bookish woman from the bar and quickly jumps to the conclusion that she’s the entity “throwing monsters at us.”

Back at her headquarters, Pandora does some more senseless rambling and waters her rotten tree, which grows to great heights (and I’m guessing that’s really bad news for the Witnesses).