We’re only two weeks into ABC’s Quantico, but I’ve already got a sternly worded warning for the series’ Powers That Be:

Why? Because, aside from young Agent Parrish, there is no one and nothing to trust on this show — and trying to figure out the hidden agendas of all the dashing would-be bombers simultaneously is downright tiring.

Is that Nimah in this scene, or her twin sister Raina? Is Liam’s endgame so secret, even he’s not in on the plan? Why does Caleb have a Facebook page under a different name? How does Shelby keep a side-ponytail looking so fresh after a morning full of training? And why do Simon’s fake glasses make him seem so sinister?

Meanwhile, in the present, fugitive Alex seems to have gained an ally… or is he? (Side note: I feel like you could add “… or is s/he?” to pretty much any sentence in this recap, and it would remain accurate.) Read on as we review the major developments in “America.”

BACK FOR MORE | Though the hour’s action hops between the present-day bombing aftermath and the Quantico training period, we’ll talk about the past first and the present later, cool? We see snippets of entrance interviews, prior to the recruits’ acceptance to the FBI academy. It’s all America this and patriotism that, and we’re introduced to a recruit who wasn’t part of the core group last week: Nathalie Vazquez, a former cop with a scar behind her ear and an obsession with besting Alex at everything — including grabbing Ryan’s attention. During Alex’s interview, Ryan and Liam watch from behind a two-way mirror. “That’s your mark,” Agent O’Connor informs him. 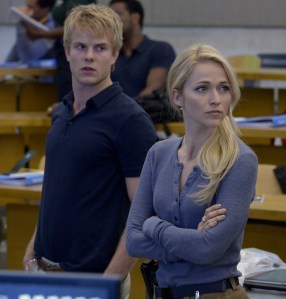 Cut to Week 2 of training, with its requisite shots of the very fit recruits sweating it out in very tightly cut t-shirts. (Like, ridiculously tight, right?) “It’s like we have the Olympics every morning and we have to pass the bar every afternoon,” Shelby complains. She’s supposed to be exhausted, but she looks like she just walked out of a Neutrogena ad. She says she doesn’t miss Caleb — the cocky kid who watched his interrogation partner blow his brains out in the last episode then left the program — and airily reminds everyone of the no hook-ups rule… which means she and Caleb are 100 percent going to hit it, because he’s back!

The “golden boy” returns as an analyst trainee for the week’s assignment, in which the recruits partner with analysts to search recreated terrorist hideouts in an effort to identify and stop attacks before they happen.

NEEDLES IN HAYSTACKS | Elias, an analyst trainee who’s gay, immediately sniffs out Simon as same and tries to make friends, but Simon is put off by the guy’s strong approach. (Side note: With those cheekbones, who wants to bet that Elias’ secret is that he’s actually part of Dancing With the Stars‘ Hough family?) Elias later does a little digging and finds out that no one with Simon’s name has gotten official paperwork to travel to or from Gaza in the last several years; he then realizes that Simon wears prescription-less glasses (not that there’s anything wrong with that!) and gives the whole situation a rather brutal side-eye.

Anyway, Alex is the only one who eventually figures out that the terrorist exercise was a ruse: Agent O’Connor was the real (practice) threat, and he left surreptitious clues in each tableau to point only the savviest of recruits his way. While Parrish is basking in admiration from O’Connor and Assistant Director Shaw — and glorious, envious bitchface from Nathalie — Booth approaches her to admit that she was right about him when she said he was a broken, divorced mess of a man from Hawthorne. But did she really have him pegged… or is this just another lie to get close to her for mission purposes? 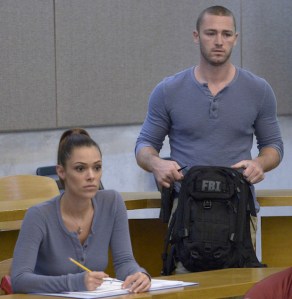 MISCELLANEOUS/MYSTERIOUS | Also to be filed under “Shady, sketchy and/or huh?”: Is the person with whom Shelby converses in a foreign language at the end of the episode the same contact she wiped from her phone at the beginning? Why is Nathalie pasting on a fake scar? What’s up with Caleb — or it is Mark? — and his social media persona? And what does Liam refer to when he tells Miranda, “These people have no idea what you did two years ago. You saved their lives”?

Oh, and because I couldn’t figure out where else to fit this in: Nimah’s twin is named Rima, and the ladies are part of an experiment headed up by Miranda Shaw. Liam totally knows about the whole thing, but Miranda also is aware that there’s a full-fledged agent in her program. And Liam and Miranda both know that the other knows.

PRESENT, TENSE | OK, time to deal with Alex’s severely screwed situation in the present. The FBI has found what looks like her go bag (change of clothes, many IDs, gun, etc.) — cementing their suspicions that she was behind the Grand Central bombing — and has taken over her apartment, so she scoots to her neighborhood to review some security footage from the restaurant across the street. The tape shows Alex leaving that morning, then Ryan showing up… and Nathalie arriving much later, after his shooting.

After a bit of subterfuge that draws the FBI away from her apartment — wouldn’t they have left at least one person to keep an eye out? — Alex goes home, but Nathalie returns and the two women duke it out. Alex winds up locked in the bathroom, where she realizes that someone has busted through the walls separating her building from the next one. She climbs through the hole and sees a LOT of explosives, literally with her name on them, in the otherwise empty flat now adjoining hers.

But there’s no time to tarry, because Nathalie chases her up onto the roof. They race across rooftops until Vazquez starts shooting, and that’s when Alex tries to reason with her by asking, “Why would I shoot the man we both love?” Interesting. When they tussle once more, Alex winds up handcuffing Nathalie to the roof and running off, saying, “I’m really sorry about this.”

Meanwhile, Ryan has survived his surgery and is up for a chat, so he dials back an “Unknown” caller and gets Alex’s burner phone. He says he was at her place to apologize but got shot by whomever opened the apartment door. She tells him she’s being framed, and he agrees to help but says he’ll have to act like he thinks she’s guilty. So as the episode ends, O’Connor releases Alex’s photo to news outlets, who caution that she’s a dangerous, on-the-lam threat to America.