Sleepy Hollow‘s Season 2 finale left Ichabod minus his witchy wife and surly, sorcerer son… and musing a fenestella’s worth of unanswered questions.

“Coming out of Season 2, and with a lull in the evil, like Abbie, he was also asking questions about, ‘How do I fulfill my destiny as a Witness and still find a place in the modern world?” says showrunner Clifton Campbell (The Glades), who took the series’ reins after executive producer Mark Goffman left in May.

When the supernatural drama returns tonight (Fox, 9/8c), we’ll begin to learn what Crane and Abbie Mills, his partner in apocalypse avoidance, got up to during the nearly one-year time jump between seasons.

Much has been made about Mills’ transformation from Sheriff’s Department lieutenant to FBI agent; tonight’s episode also will explore how Ichabod traveled to the United Kingdom “to look for context for what his life’s purpose was about, what his mission is about, how far back they go, and ‘Are there any others in my family that have had a brush with this?'”

Read on for more Season 3 details, including updates on Irving, the Horseman, Joe Corbin and — yes — Betsy Ross.

TVLINE | When you say “went back to England,” the first thing I think is “Ichabod Crane was on an airplane.” Was he?
He was… There’s some interesting things to play, post his return, that we put out there I’d like to keep secret, but yes: He definitely traveled abroad, and he experienced flight.

TVLINE | Does Sleepy Hollow have its own FBI bureau? Where is Abbie stationed?
They’re called resident agencies. They’re much smaller FBI offices, and there is one in White Plains, which is literally nine miles from Sleepy Hollow. So in our creative license way, we have a perfectly reasonable FBI presence within Sleepy Hollow that she’s been assigned to.

TVLINE | Are we done with the sheriff’s department, then?
Yes, we are.

TVLINE | When Irving was around, he knew what the Witnesses were up to, and that greatly helped them with their mission. Does Lance have any inkling of what’s going on?
He does not, and that’s why the accountability is so important. It gives us a lot of conflict in Abbie’s character, because she has been called to duty on something that’s of preeminent importance, yet developing her own career path and becoming her own person requires a very terrestrial commitment to her job, and we love the push and pull of that. And you know, I’m new to the show. It felt like they all too quickly coopted whoever was the boss in the first two seasons into the supernatural, or just ignored them entirely. It felt like there’s real drama there, and if it’s a personal relationship, even more so, it could be a nice challenge to Abbie’s character.

TVLINE | Is Irving’s absence explained or addressed in the first handful of episodes?
It is.

TVLINE | Anything else you can tell me about that?
No. [Laughs] We handle it respectfully for the character. It was always our intention to finish this character’s story out. For a handful of reasons, it became difficult to schedule and to make work out, but his character and what Irving did between seasons and the decisions that he made in prioritizing his life are definitely explained.

TVLINE | We’ve known for a while that the Headless Horseman won’t be around this season. What was the thinking behind that change?
We wanted to refresh the mythology and deepen what it meant to be a Witness, and really sort of confound everybody’s expectations about what fear and evil could be. As iconic as that character is  — and it’s Sleepy Hollow: Anything could happen — but this season Headless is taking a break.

TVLINE | Do you plan to show flashbacks to the time between Seasons 2 and 3?
Oh, yeah. We’re going to have fun with that.

TVLINE | The show has been having a good time with the idea of Nikki Reed as a sexy, spying Betsy Ross, but will we see her and Ichabod getting romantic?
Well, they have a very close working relationship. Those moments, or those looks in between, are too much fun to play with, and I would say that’s about as far as we feel we need to go with that character. But it’s so far been very satisfying to watch these two carrying out General Washington’s orders and the fun that ensues.

TVLINE | The last time we saw Zach Appleman’s Joe Corbin, Abbie wrote him a letter of recommendation for Quantico. Did he go, too?
He did not… There’s a lot about his journey in the past year that comes into play in Season 3. Let’s call it being his own man and finding his own way, and to that end both Jenny and Joe Corbin have a lot of questions about August Corbin and what Joe’s father was really about that get addressed in season, which is really, really, exciting. 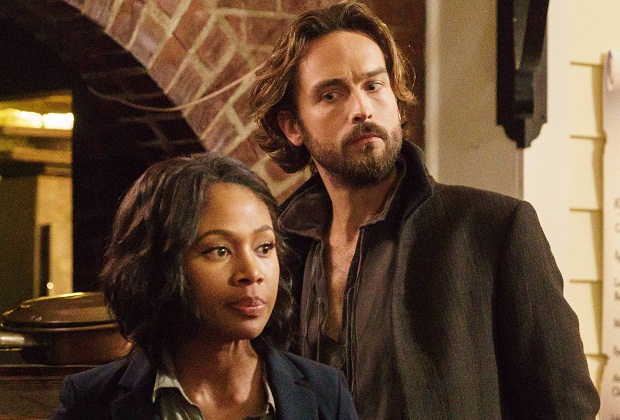