The Nashville star is standing before a small crowd, guitar slung across his chest, at The Southwest Porch in New York’s Bryant Park a few days before the ABC series’ Season 4 premiere.

Esten — along with Nashville musical contributors/Bluebird Café regulars Kim Richey and Striking Matches — are putting on a free, al fresco concert for the after-work crowd. He rises from his stool and steps to the mic.

“It’s a lot of fun writing from Deacon’s perspective, because he has some issues,” Esten says, strumming a few notes as he introduces a tune called “Whiskey Lips.”

But the audience knows what it’s here for. “Does he live?!” a woman calls from the back.

The question is one Esten has been getting a lot this summer, he tells TVLine during some downtime before the show, given that his alter ego may — or may not — have flatlined in the final moments of the drama’s Season 3 finale. He recalls a moment from a recent pre-gig Q&A session.

“They handed [the mic] to a little girl, a Cindy Lou Who. I said, ‘What’s your question, sweetheart?’ She says, ‘Is Mr. Deacon gonna live?'” He laughs heartily. “I go, ‘That is hardball! That is dirty pool!'”

(Editor’s note: Though we — and Esten  —are not at liberty to say whether or not Deacon will sing with the angels, we can confirm showrunner Dee Johnson’s assertion that you’ll know minutes after the premiere begins.) 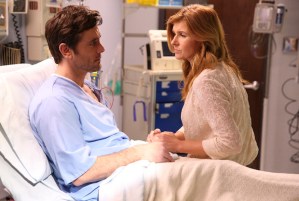 Nashville fans will remember that Deacon and Rayna’s last interaction involved him wanting to get married in his hospital room before he was wheeled into the OR suite — and her gently refusing to give in to his panic. They were at a good place as he left her… but Esten says a lot of Deke’s composure was for show.

“She talked him back to reality a little bit, as she can so well,” he says, smiling wryly. “But then as he was being wheeled out, it’s not like, ‘OK, that’s done. I’m better now.’ [It’s more] ‘I’m going to have to trust you on this one, sweetheart, because I’m not feeling a thing you said.'”

“I understand the concept of why you would,” he quickly adds. “I understand all those reasons are why Deacon wanted it. But Rayna’s reasons,” he pauses to grin, “are extremely valid, too.”