Question, tease, cajole and wheedle Nashville showrunner Dee Johnson all you like: She isn’t giving up anything regarding who lives or dies — Deacon or Beverly?! — in the resolution to the drama’s season-ending cliffhanger.

“I can’t do it!” she says, laughing. “I’ll just tell you that Rayna’s world will never be the same.”

Fortunately, Johnson can answer several other burning questions we have in advance of the ABC series’ Sept. 23 return (10/9c). Will Juliette make up with Avery (and Rayna)? Will Will regret his bold declaration at last season’s press conference? Will Scarlett and Gunnar be able to keep their musical partnership platonic? Read on for the Music City lowdown.

TVLINE | From the premiere’s photos, we see that Rayna comes to talk to Juliette, who is trying to break her contract with Highway 65. What is their relationship like at that point?
Like I said, there’s been a one-month time jump, and a lot has happened in those ellipses for both those women. But you know, given where we left them… I think that those two will always have kind of a weird connection. But it’s not a stretch to say that it doesn’t go well. [Laughs] 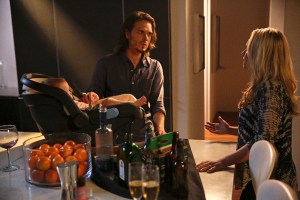 TVLINE | When we spoke after the finale, you said you didn’t think it would take Avery and Juliette very long to get their relationship back on track. Does that still hold?
Well, I guess it depends on your definition of “long.” [Laughs] They have a lot to overcome in the early going of this season.

TVLINE | Cadence has been with Avery since last we saw them?
Yes.

TVLINE | What’s up with Gunnar and Scarlett? She was about to move in with Dr. Caleb, but she also almost kissed Gunnar at the end of the episode.
That’s a tricky one too. They’ve embarked on this duo that they’re committed to now. It was a little bit of a Pandora’s box up there on the roof, given the givens… Where we left [them], they were going to go on tour. It’s a real problem in terms of whether or not that box gets closed or whether it’s going to ruin a good thing. 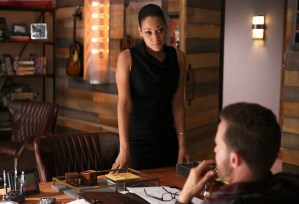 TVLINE | The show is bringing in a character named Gabriella to handle some public relations issues for Will and Luke. Is she also a possible love interest for Luke?
No. The problem, any time you have a potential love interest —

TVLINE | But here’s the thing: Every time you say that, such as, “Sadie doesn’t have to be a love interest for Luke,” then they have a moment, and then another, and then that scene before she shoots her husband…
You know, they never really were officially love interests. [Laughs]

TVLINE | But if Laura Benanti had stayed, I defy you to not make them a couple.
That’s true. If Laura hadn’t had such a huge Broadway career, they may well have been a couple.

TVLINE | So, is there a possibility that Gabriella might catch Luke’s eye in that way?
There’s always a possibility of the eye-catching thing, but I will say that she comes into the show with business in mind. They are both committed to making [Luke] a global brand. Whatever happens in the context of that, happens.

TVLINE | On a related note, will Will’s coming out be as rough as he feared on his career?
It’s a real journey. [The press conference] was the first gigantic step, and now there’s 999 more to get where he needs to go… It’s safe to say that he meant everything he said in that moment, and then, of course, then afterwards you’re going, “Oh gosh, should I have done that?” When we come back, he’s been hibernating a little bit. The question is: When he comes out of hibernation, where does he fit in?

TVLINE | Talk to me about Layla. Will she be more center stage, now that Aubrey Peeples is a series regular?
[As] we come into the season, she and Jeff have a new understanding… Their unique love, is on the table, and they are poised to kind of try to see how that works as a couple. But the manager/client relationship is a tricky one, and one of the things we’re really focusing on, in terms of our general storytelling this season, is public perception versus what’s really happening, and how different those things can be.

TVLINE | What can you tell me about Highway 65’s newest artist, Markus Keen?
We meet him for the first time in Episode 2, and then he’s in a pretty significant run — not necessarily in every episode… He’s a guy who’s coming off of a band, a very popular band that has broken up, and had some problems. And Rayna seeks out a unique way to court him, and has brought him into the fold of country music, and hijinks ensue.