Law & Order: SVU‘s 17th season kicks off Wednesday with a two-hour premiere, a nod to HBO’s The Jinx and executive producer Warren Leight‘s fifth year at the head of the seemingly unstoppable crime drama.

“When I came on, it was after [executive producer] Neal Baer was leaving and Chris Meloni was leaving, so everybody looked at me like, ‘Here’s the guy they got to board the Titanic after the iceberg hit,'” he says, chuckling. “I’m glad that we’ve stayed afloat for five more years.”

In advance of the series’ return (9/8c, NBC), we talked with Leight about Olivia’s aspirations, Rollins’ vulnerability, Amaro’s absence and — of course — Donald Trump. Read on for more.

TVLINE | Greg Yates returns in the two-hour season premiere, and you’ve said that he’s really going to mess with Rollins, in particular.
Rollins always gets in to the head of these psychos. There’s something off about Rollins. She relates to these guys and get into their head, but the other question is: Is he getting into her head? That’s the setup — whether or not he’s telling the truth. Even when we think we know the answer to that, there’s a few more tricks and turns.

About four months ago we asked the fans on Twitter if they wanted a weepy sort of premiere or a sick, twisted, disturbing episode. They voted for gore and gruesome over heart-wrenching, so they got it. 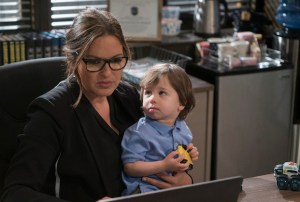 TVLINE | Talk to me about Olivia at the start of the season.
The first case is just a horrifying one for her because it involves… Rollins getting in too deep with some bad company, and it looks like the squad screwed up one way or another. So she’s under that gun. As the season progresses, we’ve gotten over the “Will she be able to keep the baby?” But the pressure is, there’s a lot of political cases coming up, and she is up for this promotion to lieutenant. It would be great if she was able to play the good ol’ boy game a little better, but that’s not her strong suit. We’re going to see her dealing with the limits of her political abilities and what the repercussions of that are.

This season is about transition, so that wherever anyone is at the beginning of the year is not where they’re going to be by the end of the season.

TVLINE | It’s interesting to hear you say that, because procedurals usually pride themselves on the core characters remaining pretty much the same from season to season.
The characters for the longest time did not change, right? It was the Elliott-and-Olivia show, and their will-they-won’t-they for a long, long time. This was a huge, ongoing dialogue I had with Dick [Wolf, series creator]. The general state of belief in procedurals is: No one changes, ever. I feel like the problem with that is, TV has changed. Also, in a show that’s been on this long, your characters have changed just by dint of the fact that the actors playing them are maturing. So if your characters don’t change, they begin to look immature.

TVLINE | Fans had a big reaction to Olivia’s mention of Elliott in the Season 16 finale.
I think it’s been fun to see Olivia who, let’s face it, was stuck for a long time… You’ve seen this with people who are just in a bad relationship or who are depressed or isolated. Once, somehow, they break it, then all kinds of possibilities open up. From a storytelling point of view, that’s more interesting… [For instance,] as much as we miss having [Danny Pino’s Amaro] in the squad room, taking him away affects Rollins and Benson, because they both have sort of an emotional dependence on him.

TVLINE | Next week, the show will handle a transgender teen story. There’s also an episode about child protective services ahead. What else can you tease about future episodes?
It has been a shockingly depressing summer in terms of the kind of stories that have broken. There are a lot of headlines to rip, for better or for worse. There’s been a lot of questions of police use of power this summer. We’ll be looking at that at some point. There have been a lot of hypocrites who espouse family values while living a different way, and we will be looking at that.

TVLINE | Given that Donald Trump has been in the news so much — and that he’s such a famous New Yorker — will you somehow reference him this season?
I don’t know. I can’t imagine I’m going to go the entire season without referencing Trump in some way.