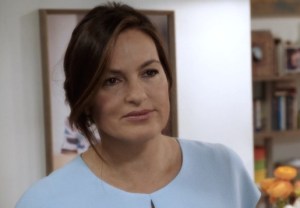 (Big spoiler ahead, for those who have yet to watch….)

At episode’s end, Detective Amaro (played by exiting cast member Danny Pino) revealed to Benson (Mariska Hargitay) that, having been a hot-headed magnet for inter-department controversy (and after barely dodging, but not, a bullet in a courthouse shootout), he has decided to resign from the NYPD and relocate to California, to “start over.”

As a shaken Benson processed the news, Amaro offered, “I know I wasn’t what your old partner was for you,” referring to Stabler, who exited the show at the close of Season 12 (when series vet Christopher Meloni famously parted ways with the NBC series).

“No, you weren’t…,” Benson responded — but in a good way, she proceeded to explain.

“I grew more in my last four years with you than I did in the 12 years that I was with him,” said Benson, who in recent years has risen in rank from Detective to Acting CO to Sergeant. “That relationship, whatever it was, didn’t allow for anything else. But with you, with your support, I have a family,” in wee son Noah (whose adoption is now super-official). “You helped me grow.”

Did Benson’s remembrance of her “limiting” (?) partnership with Stabler catch you off guard? Or do you see where she was coming from?