If you’d swung by Vinci Gardens and played the odds that at least one of True Detective‘s core four wasn’t gonna make it out of Season 2 alive, this week’s episode would’ve been your big payday.

Yep: Poor, conflicted, wooden (dare I speak ill of the freshly dead?) Paul Woodrugh is no longer working the Caspere case — or any case — after narrowly escaping an ambush by his former military buddies… and then getting shot dead just when he thought he was safe.

In other news, everyone is screwed and Ani and Ray did the sad-n-nasty. Read on for more highlights of the season’s penultimate episode, “Black Maps and Motel Rooms.”

THE HANGOVER BEGINS | At the Molera Motel the same night as the orgy party, Bezzerides is still really messed up from the drugs she was forced to take. Oh, and from killing a guy, too. “I’ve been waiting my whole life for that,” she babbles to Ray, adding something about her memory of being abused as a child, but when Velcoro asks her about it, the addled cop pulls it together, clams up and then climbs on top of him. Ray gently rebuffs her, and she saves face by blaming her advances on the drugs. “You’re too far outta my league, anyway,” he quips.

When they regroup with Paul (and Vera, who’s sleeping it off in the corner), he lays out what he’s learned from the paperwork he stole: Catalyst sold Caspere’s parcels in the rail corridor to holding companies owned by Anthony Chessani and Osip. His exposition is interrupted by a text message, complete with surveillance photos of him kissing his Army buddy, and a warning that they’ll be send to baby mama/fiancée Emily soon.

A MOLE IN A DEEP HOLE | So while Paul ignores Emily’s questions about the photos she has heard vague mention of (thanks to an anonymous caller) but not seen, he stashes her and his mom in a motel for a few days. His cover is blown, he tells them, and the sequestering is for their safety.

Meanwhile, Ray has a little information exchange with Frank at the casino to let him know that his problem is “way bigger than Blake.” In fact, Semyon’s weaselly employee is listed as the treasurer on at least one of the holding companies’ rosters: In short, he definitely helped Catalyst et al screw Frank out of his money. In short order, Frank breaks a table, gets Blake to admit to killing Stan (because he’d learned what Blake was up to and was trying to blackmail him), and then nearly chokes Blake to death… until the slippery dude coughs out that he knows about a $12 million handoff between Osip and Catalyst happening the next day. 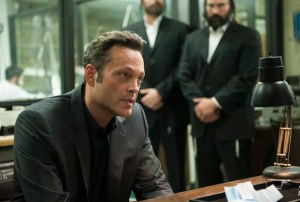 Blake gladly gives up the location of the transaction and the fact that Osip has bought the liens on the casino and Lux Infinitum (meaning the Russian-Israeli mobster is the new owner). Blake even offers to be Frank’s inside man in a triple-cross (ballsy!), but Frank has other plans: He shoots his former consigliere in the gut and then mocks him as he bleeds out on the carpet.

He then meets with various people (a diamond broker, a travel agent, those bakery mafia peeps we met a few episodes back) and the general gist is that he’s planning on going on the lam with Jordan. So by the time Osip and his goons show up at Vinci Gardens, Frank’s all, “OK cool bro,” secure in the knowledge that he will set both the casino and Lux on fire as a parting gift to their new owner.

THANKS FOR NOTHING | At the motel, a sober Vera is less than thrilled that Ani “rescued” her: “I never wanted to get out. You ‘found’ me? I was never missing,” she says sulkily. She helps the investigation by looking at the blackmail photos and saying they must’ve come from Tasha, Caspere’s special lady, who was caught with a camera at one of the parties and “taken out back” to a little cabin that Ani realizes is the murder shack she found.

Let’s take a break for this week’s cringe-worthy dialogue moment, yes? Here it goes: VERA: I had a good thing with Tony and his people. ANI: Maybe, and this is just a thought, you were put on Earth for more than f—king. VERA: Everything is f—king. Oy.

Also terrible: Katherine Davis is dead, shot through the chest in an attempt to stop her investigation/frame Velcoro for her death. (Side note: Of all the violence in this series, her murder is the first instance that made me feel anything. Anyone else in that boat?) So Frank — along with Ani — are wanted by the law. She handles this fact by making some peace with her dad, sister and former partner, then sending the Bezzerides portion of that equation north to lay low.

LAURA’S IDENTITY REVEALED | Paul once more fulfills his “let-me-look-at-papers-and-a-computer-screen-then-tell-you-what-they-said” role as he informs his partners that Caspere was in cahoots with some rogue cops on that double murder at the jewelry story in 1992. But another text has him running off to meet his blackmailer, so he’s not there when Ray and Ani realize that the jewelers’ daughter, Laura, grew up to be Erica, Caspere’s secretary who conveniently no longer works at the city managers’ office and who is definitely in one of Tasha’s party photos.

While they wait for Paul to return, Bezzerides and Velcoro stare at each other, drink and then have sex. It’s better than the blow-and-model-smashing bender, I guess?

PAUL FALLS | Paul is shocked to see that the person who’s been texting him is Miguel, the war buddy with whom he hooked up. Turns out, the security firm they worked for overseas now only has one client: Catalyst. So Paul is marched into some tunnels underneath the city, where he sees Police Chief Holloway — who was at the party, too, you’ll recall. Holloway has Miguel and several other guards train their guns on Paul as he demands the return of the contracts he stole. There’s some back and forth, then Paul gets the jump on the older man and manages to get away.

Lots of running. Lots of gunfire. Miguel gets shot in the head while Paul kinda-sorta uses him as a human shield. But eventually, Woodrugh makes it to an exit and steps into daylight… only to be shot fatally by Velcoro’s boss, Lt. Burris.

Now it’s your turn. With one episode left, what are your hopes for this season’s finale? Sound off in the comments!