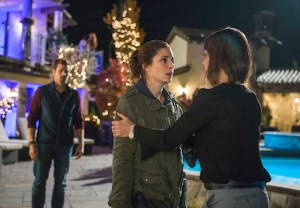 Question of the week, raised by Everlasting gofer/Pippi Longstocking stunt double Madison: If you do something completely terrible, then do something almost as terrible in order to escape blame — but that second something makes at least one person happy — are you worthy of a comforting cuddle?

OK, that’s maybe not 100 percent what the P.A. means on this week’s UnREAL when she raises the possibility of a good ending resulting from a bad situation. But we’re up to our walkie-talkies in the immediate aftermath of Mary’s death, and everyone’s feeling a little out of sorts.

Shia finds herself a prisoner, with Jay her warden. Quinn gets screamed at by the network head. Chet makes a life-altering decision (but will it last after his high wears off?). And Rachel makes a choice that should bite her in the tush — but doesn’t — and winds up between the sheets with Adam.

Who are the monsters? Who are the pragmatists looking out for the greater good? Can anyone tell the difference anymore? Read on for the highlights of “Savior.”

‘THIS IS ON US’ | The moments immediately following Mary’s jump are a blur of oh-s—t! activity. Quinn has Shia and Jay round up the remaining contestants and stick them in a room. Rachel starts her slow tumble into shock, numbly mumbling to a worried Jeremy, “I had her hand.” Quinn pulls Rachel into a hug, the latter crying as the guilt sets in hard. “The whole thing with Kirt. This is on us,” she says. “This is our fault.” The police show up.

In their room, Grace, Maya, Faith, Anna and Shamiqua only start to realize something’s really wrong when they notice there are no cameras rolling outside — and no one’s filming them, either. 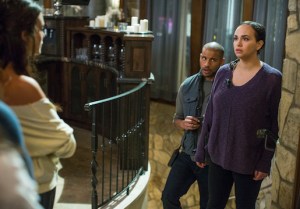 BLAME GAME | After Brad the Network Head orders Quinn and Chet to shut down production until the lawyers can sort everything out, Rachel pulls herself together and grimly asks Adam to tell the girls what’s happened. “That’s insane. I’m not a grief counselor,” he says. “I’m English.” (Heh.) But of course, he eventually does what she says, because he does everything she says. (Side note: And he likes it.)

Just then, Shia and her tiny braid pull Rachel into the edit bay to purge her soul… but her teary confession that she swapped out “a few” of Mary’s mood-stabilizing drugs soon becomes a defensive screed about how she’s a good producer. “I got her off the sidelines and into the game,” Shia crows, citing Rachel’s call to bring Mary’s abusive ex to set. But Rach (who’s maybe a little happy she’s not the only one who made a really bad decision re: Mary?) is hearing none of it. “Kirk didn’t kill her. You did,” she says, warning Shia to tell Quinn quickly.

MOVING ON! | When Shia does divulge the truth to her boss, Quinn summons Rachel to the meeting and then promises Shia she’ll take care of her. (This means locking her in a hotel room with Jay as her guard for most of the rest of the episode.) And once Shia’s gone, Quinn briefs Rachel on the party line: “Mary took her own life. End of story.”

When Rachel adamantly refuses to go along with that reasoning, Quinn points out that hundreds of people (and their families) will be adversely affected if production is shut down for good — a high price for a clear conscience.

RELATED UnReal‘s Constance Zimmer: Prepare for the Season to Get ‘Dirtier and Darker’

LIZZIE WHO? | Fresh off learning that Kirk is suing Everlasting and that Maya is quitting the competition, Rachel retreats to her bunk in the back of the equipment truck and is followed closely by Jeremy. She is barely holding it together (though I feel like that phrase can be applied to her on most days, no?) and though she makes a halfhearted attempt to keep him at arm’s length, he knows she’s not OK. “When it comes to you, I see more than you think,” he says, pulling her into a deep hug that warms up when he puts his lips on her forehead and then combusts when she kisses him in earnest. Man, these two go from 0 to smoldering fast.

“So, that happened,” he says the next morning, but challenges Rachel when she calls their hookup “grief sex” and is shocked when he hears that she’s OK with the show’s plan to settle with Kirk. Reminded that she doesn’t have to be a sleepwalking zombie through all of this, a reenergized Rachel starts to put together some footage that’ll make Kirk look like the beast he is. She plans to leak it to the lady-friendly media (Jezebel, etc.), but Adam won’t play because he blames her for what went down. “You’re a monster,” he spits.

RELATED Unauthorized Melrose Place Tell-All in the Works at Lifetime

LETTER BE | Brad the Network Head gets Mary’s toxicology report (which proves she was drunk and off her meds) and puts the kibosh on Rachel’s little side reel, then gets really angry and threatening. So Rachel slinks up to Mary’s room and finds one of Lily Belle’s stuffed animals. (Side note: Doesn’t the fact that Mary’s motherless little girl is named “Lily Belle” and not just “Lily” make everything just a little more tragic?) And hey, Rach says when she finds Chet and Brad the Network Head: Mary left a note!

So Mary’s sister, Louise, returns to the set and reads her sister’s final words during the taping of the episode — Everlasting is back on, everyone! And isn’t it convenient that the note mentions how Mary had been so happy with Adam, she’d stopped taking her medication? And that she invited Kirk to be a part of the show? If you haven’t figured it out yet, allow Louise to spell it out: She knows Rachel wrote the note but she doesn’t care, because she’s on board with “whatever it takes to keep Lily Belle away from that monster.” And the network’s lawyers are relieved, too.

Shia returns to the house long enough for Quinn to tell her she’s done; Maya’s quitting means the producer no longer has players in the game, so Quinn sends her home for good. “Be grateful that’s where you’re going instead of jail,” the older woman advises. Then, all that’s left is for Quinn to hug Rachel as they agree they’ll probably never mention this entire incident ever again.

THE MEN STEP UP | But wait! Two more very important things! First, Chet — having taken Pippi’s words to heart — shows up at Quinn’s office and lets her know he’s just left his wife. Via phone. (Stay classy, Chet.) And a lonely Rachel, having watched Jeremy leave with Lizzie, creeps into Adam’s part of the house and slips into bed with him. You can tell she’s not there for nookie (stays clothed, turns away from him) and he feels bad about what he said earlier. “You’re not a monster,” he whispers. “Yeah, I am,” she responds despondently. Not knowing how to handle that, Adam just draws near, spoons her and allows his hairless chest to do the soothing.