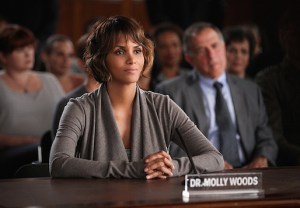 Extant‘s Season 2 premiere falls back on the age-old cautionary tale: While the astronaut’s away, the robotics pioneers will play!

OK, that’s not the most important takeaway from the CBS drama’s season opener, which finds Halle Berry’s Molly confined to a psychiatric institution in the wake of some very terrible events. But her husband John’s affair stings nonetheless, especially given the way his involvement in the story ends during the course of this episode. (At least the clues to his infidelity were well-laid —apparently, just like Julie! — last season.)

Oh, and the aliens are still out for us. That’s important, too. Read on for the highlights of “Change Scenario.”

HALF-TRUTHS… | The hour opens with Molly and some hot, naked guy getting it on in a shower. But when she says, “Change scenario,” it becomes clear that she’s on some kind of holodeck or something; the next scene is of her and Ethan hanging out on the floor of his room. The virtual reality session ends with a robotic voice telling Molly it’s time for her medication… and then we flash back to six months earlier.

It’s the night that the couple picked up Molly’s alien son on the bridge, and sure, why not take a strange child home and leave him alone in a room with your obviously wigged-out infant, Mr. and Mrs. Good Samaritan? Molly’s kid barricades the door with his mind, has a seizure, bleeds and then dies (maybe).

Four weeks later, Molly gives her official testimony about what happened on the space station and immediately after. Her colleague Sean died, as did all traces of the alien spores she encountered. “Without a doubt, there is life out there,” she says confidently, but then just as confidently states that there is no way any of the spores are currently on Earth.

Afterward, as Molly talks with her old friend Toby (The Walking Dead‘s David Morrissey), who’s the head of the nation’s Global Security Commission, he reassures her that not telling 100 percent of the truth is in the country’s best interests. “People spook easily,” he says, and promises her that her E.T. son is dead.

… AND CONSEQUENCES | When Molly surprises John at the lab, where he’s working on Ethan 2.0, she catches a close moment between her husband and Julie. Molly’s suspicions are tabled for a while as all three activate the newer, taller version of their humanich son (nice way to explain Pierce Gagnon’s growth, Extant!), but later that night, she wants answers. John has deleted footage from inside their home while she was gone, but our ever-resourceful Molls pulls the tape from a nearby toy and watches Julie and John carry on an affair while Molly was orbiting the planet in a glorified tin can.

“It’s been over for a while,” John says when he realizes he’s been found out, but Molly doesn’t care. Just as their fight is getting really heated, Homeland Security busts in and takes Ethan… straight to Julie? “Hello, rabbit,” she says kindly.

MORE SPORES | Turns out, Homeland Security has taken John’s humanichs program away from him (because he argued against using the androids as soldiers) and put Julie in charge (because she is a terrible human being). After the former lovers fight, John leaves in his self-driving car, which strands itself on some train tracks. When an oncoming train approaches… that’s it for Mr. Molly Woods. (Sniff.)

Which brings us back to the psychiatric center, present-day, where Molly is chilling after burning down her house and attacking Julie with a shovel. Dr. Woods isn’t acting very repentant, so it’s no surprise when her in-patient time gets extended. But when she gets word of a bloody death that sounds a lot like the alien life form’s modus operandi, she sweet-talks an employee, escapes from the facility, steals his car and makes for the crime scene.

That’s where she meets JD Richter (Jeffrey Dean Morgan, Grey’s Anatomy), a scruffy, sexy cop-for-hire who doesn’t believe that Molly can contribute much to his investigation — until she mentions that the victim was pregnant (as were a few before her), and he verifies it. Next thing you know, JD is signing Molly out of the hospital (something about her being a “material witness”), she’s telling him that the murders are really “an invasion,” and he’s believing her.

Somewhere else, a man hits on a woman at a bar, and as they walk away from some privacy, his eyes glow: He’s an alien.

Now it’s your turn. Grade the premiere via the poll below, then hit the comment to back up your choice!