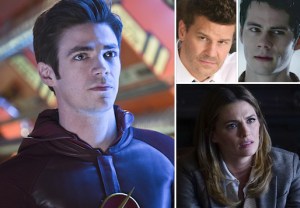 How will new faces affect The Flash? What tragic time will Teen Wolf revisit? Who will help battle The Strain? Who’s (finally) back on Bones? Is Castle‘s Kate MIA?! Read on for answers to those questions plus teases from other shows.

Any Westallen scoop to help us survive The Flash‘s hiatus? –Kaz
As we all surmised when I wrote this not-at-all-controversial bit, Barry is getting his own “Felicity” because it’s simply too soon for Iris to move on from Eddie — especially since Season 2 picks up right where we left off, with The Flash fighting the wormhole. “[Eddie’s death] is definitely a factor, for sure,” Grant Gustin says. “Barry wants to be there for Iris as her best friend right now. And for Barry, too. It’s too soon for everybody. Some tragic events just took place!” Interestingly, exec producer Geoff Johns added that the aforementioned (and yet-to-be-cast) CCPD noob Wendy Miller won’t be the only one shaking up the status quo when the CW hit returns. “There are a lot of new characters coming in, not just the ones that have been leaked online,” he teased. “And they all will challenge relationships, in good and bad ways.”

Any info about who/what Teen Wolf‘s flashback episode (5×06, I think) will feature, aside from Scott and Kira? —Cecile
Show boss Jeff Davis tells the Inside Line you can expect “a heart-wrenching scene between Stiles and his mother, Claudia, where we learn just how bad things got before her death.”

Anything you can say about MTV’s Faking It? The wait is killing me! –Lauren
I said just last week in this column, I shan’t leave any dead bodies behind. So read on! When the series returns on Aug 31, Hester High is turned on its head as a new principal arrives with a mission to get the school back on track. At the same time, Karma and Amy are trying to put their friendship back together (after Karma learned that Amy bedded Liam), but really — can they ever get past that betrayal? The other burning Q is: Can Shane keep boyfriend Duke from finding out that he’s the one who outed him?

Do you have any scoop on Season 2 of The Strain? –lilslim
Show boss Carlton Cuse shared with TVLine that among Eph’s allies this season is “a very cool new character played by Samantha Mathis” (whom I, Matt, will always associate with Broken Arrow). “She’s a city councilwoman in Staten Island who decides, ‘I’m going to do something about this vampire plague myself.’ She’s amazing.” Cuse also let slip this tease about the show’s Biggest Bad: “The Master might have escaped [in the Season 1 finale], but that doesn’t mean he was uninjured. Let’s just say that.”

Wayward Pines is officially my summer TV obsession. Anything to share? Could Plot 33 be a way back home? –Pat
I wondered the same — for a half-second, before deciding no amount of Pilcher tech could send someone back in time 2,000 years. So I asked show boss Chad Hodge about the mysterious, overgrown parcel of land. “I wouldn’t say it’s the show’s next big mystery, but it’s one of them. And it’s a key to the final chapter of Wayward Pines,” he answered. Bonus scoop: “Someone who you might not be thinking about makes a brief reappearance,” Hodge teases, “and it has to do with what’s going on outside the fence separate from the Abbies.”

Did Graceland‘s Mike actually forgive Paige? Or is he playing her? –Diane
I’m going with Option A, suspecting that in his “death,” Mike saw the proverbial light. “One of the things that fascinated me, as a big Six Feet Under fan, is that Mike was clinically dead for six minutes,” series creator Jeff Eastin says, “and the season does hinge a great deal on what he believes happened in that six minutes.” Which is not to say that a crossover with TNT’s Proof is on tap. “We have not done any spiritual shark-jumping,” Eastin makes clear. “But it does influence the season a great deal, and I think at the end people will be very surprised by exactly how it does that.”

Is Chicago Med a full-season order? –SciFiGuy
As with most every freshman series (spinoffs included), Chicago Fire‘s latest spawn got the usual 13-episode order, and is eligible for a “back 9” upgrade (if merited).

Any scoop on Once Upon a Time? I’m not particular, I’ll take anything! –Allison
I’m hearing that the season opener, not unexpectedly, will pick up right where the finale left off, with Emma having vanished after taunting the disembodied Darkness with the Dark One’s dagger. Where exactly the Savior was transported to, however, thus far remains a closely guarded secret (but hey, that’s what Comic-Con is for, amiright?) Also, it will be sooner rather than later that we meet King Arthur and the Knights of the Round Table.

Is it true that Stana Katic isn’t going to be in the Castle season premiere? –Linda
As I quite eloquently put it, on Twitter, over the weekend: “That is a bunch of hooey.”

Anything new about Castle Season 8? –Rachael
Only that I was alllll wrong about the larger purpose of the new tech analyst dude.

I’ve scoured the interwebs for anything at all on Season 2 of Starz’s The Missing and found… ABSOLUTELY NOTHING. Please tell me y’all have casting news, airdates, plot scoop… anything? –Katie
I asked around for you, and all I can report back is that “the writers are currently writing” Season 2 (which, technically, is a “second installment,” seeing as it is an anthology series).

Will we see Parker Booth anytime soon on Bones, even if it is just to see his reaction to being a big brother again? –Maria
During Season 11, “We will see Parker, definitely,” show boss Stephen Nathan affirms, putting to bed that long-standing issue/conspicuous absence.