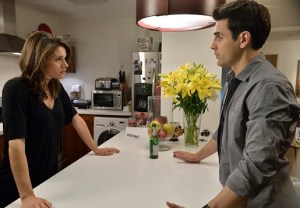 On Thursday’s Season 6 premiere of Rookie Blue, Sam discovered that he’s going to be a father. However, the mom-to-be isn’t his current squeeze, Andy, but ex-girlfriend Marlo. And when McNally found out about the impending arrival from her beau (good boy!), she needed some time to herself to think and walked away on the verge of tears.

Despite the complicated romantic history among the three parties, “We never saw this season as a love triangle,” executive producer Tassie Cameron reassures TVLine. “This isn’t like, ‘Will Sam choose Marlo over Andy?’ That’s not what we were intending or going towards.”

Instead, the unexpected pregnancy acts as a “really real obstacle no one saw” coming, she says, and now it’s about exploring “how these two grownup people are going to deal with this.”

“We didn’t want to do a love triangle,” Cameron adds. “We wanted to do a life triangle.”

Below, the EP weighs in on 15 Division’s other couples — past, present and possibly future. 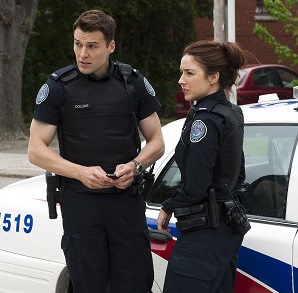 NICK/JULIET | Not only is the mystery gal a newly transferred cop, but she’s also hiding something bigger. After getting into a car with an unknown-to-us man, she says she’ll brief him on what’s going on at 15 Division during the drive. So is Juliet good or bad news for Nick? “The fun of watching her journey unfold this season is not knowing whether she’s good or bad professionally and for Nick,” Cameron hedges. “She definitely has another agenda and a serious secret.” (Could she be connected to Dov and Marlo’s investigation? A member of Internal Affairs perhaps?) In the meantime, Nick and Juliet will continue to flirt with each other as they try to deny their chemistry. “It’s fun to watch somebody’s who’s very, very burnt after a couple of relationships that have gone south,” the EP says. “It’s interesting to watch that person decide whether they can trust somebody, and at the same time, we’re exploring whether that person is trustworthy. It was fun seeing Nick with somebody totally different.”

TRACI/STEVE | The detectives are tentatively back on, but they will “still have their challenges,” Cameron teases. However,  Bailey (the fairytale-ruiner guy from last season) won’t be one of them, at least not romantically. Instead, the serial rapist from the season opener “comes back to haunt the Division and, specifically, Traci.”

GAIL/HOLLY | The premiere may have left you wondering the whereabouts of Holly, who was last seen declaring that she wanted her girlfriend back. Sadly, the forensic pathologist will not return any time soon, the EP reveals. “Gail really does focus on this adoption story in Season 6,” she explains. “It doesn’t mean that love won’t find her, but it’s not going to be with Holly this season. We just felt she wasn’t quite ready. Many of us think Holly’s the love of her life but that Gail needs to do a tiny bit more growing up first.”

DOV/CHLOE | As teased in this week’s Ask Ausiello, the former couple is “perfect for each other,” according to Cameron. “So yes, there’s hope” for the lovebirds. But someone else also has his eye on Chloe.

CHRIS/JAMIE | Oh, Chris. The cop is clean, but his NA meetings have lead to a new kind of trouble: an affair with a married woman (played by Supernatural‘s Cindy Sampson). “What we were hoping to do is give Travis [Milne] an opportunity to do what he does so well,” Cameron describes. “He’s so funny, especially when he’s fumbling around in chaotic situations of his own poor judgment. There’s certainly tension in it for real. He is having an affair with Jarvis’ wife, but we’re trying to play it more for comedy actually.”

Rookie Blue fans, stay tuned to TVLine for lots more Season 6 scoop from Cameron. In the meantime, grade the season opener via the poll below, then hit the comments to back up your pick.