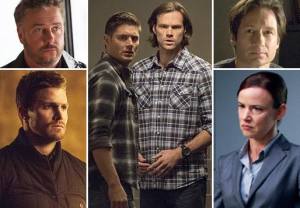 Question: Any Supernatural spoilers? —Erica
Ausiello: The Jensen Ackles-helmed Season 11 premiere* is titled “The Bad Seed” and now I know why: It marks the introduction of Amara, a femme fatale in her late 20s who possesses an acid tongue and a seductive beauty. The fearmonger is new to Earth and is so not impressed with the place. That doesn’t stop her from sticking around; she’s set to recur throughout the season. Not-So-Crazy-Theory: When The Darkness was released in the finale, this badass came with it. (*Even though the installment is numbered 1101, Supernatural episodes regularly air out of order — meaning, it could be the second or third ep of the season.)

Question: Please tell me Yunjin Kim’s Karen isn’t about to become a boring church lady on Mistresses! —Henry
Ausiello: Fret not, good sir, Karen’s special brand of crazy is about to roar back more loudly than the enormous black hat she wore to Sunday services during the Season 3 premiere. Showrunner Rina Mimoun warns that fans should definitely keep their antennae up whenever Karen’s gruff doctor (Ed Quinn) and his ailing wife Vivian (Sonja Bennett) are on screen. “That is all we can tell you,” she adds, “but rest assured, we don’t take too long to get where we’re going. We were excited to find as many twists and turns for Karen as we could this year.” Or, as her fellow showrunner K.J. Steinberg succinctly puts it, “Everything you’ve seen happen with Karen [over the last two seasons]… well, you ain’t seen nothing yet.” (Um, considering Karen once engaged in a steamy affair with her dying, married patient, subsequently bedded his college-age son and then got into a deadly altercation with the patient’s alcoholic wife, that’s a bold promise!)

Question: I’ve searched far and wide to find an answer to the “bonkers leading lady” blind item, did I miss the memo?! If not — another hint please! —Tori
Ausiello: There was no memo. And there will be no more hints. There’s a reason that was a blind item and not an actual news story. And the reason is the individual in question scares the s–t out of me. 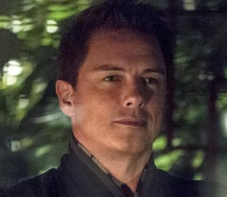 Question: Got anything on Arrow? —April
Ausiello: The show is getting around to filling Starling City’s mayoral vacancy (R.I.P., Celia Castle). Producers are looking for a fiftysomething actress to play Patty, a candidate for mayor and a longtime friend of Moira’s; as such, she  was once close with Oliver and Thea. Here’s some noisy spitballing from Mitovich: “Hey, maybe Moira once confided in Patty that she years ago paid off Oliver’s baby mama to leave town…?” Thanks, MM. Check’s in the mail.

Question: Got any Reign scoop about Season 3? I’m dying over here! — Redmond
Ausiello: That’s a mighty unfortunate choice of words, Red, considering the scoop I’m about to share with you. The series is currently recasting the beefed-up role of Francis’ younger brother Charles, “who has just begun to realize that he may be the next king of France sooner than he’d imagined.” We’ll see him grow from a “carefree, entitled” boy, one easily manipulated, to the kind of “surprisingly resourceful” young man that France could potentially look to for leadership. If all this makes you nervous for Francis, who was last seen declaring his own mortality in the Season 2 finale, then congratulations — you have a healthy sense of fear.

Question: Any word on whether there will be another season of The Lizzie Borden Chronicles? It was a blast to watch. —Tyler
Ausiello: There is word. And it’s no.

Question: I know you said in last week’s AA that we’ll see Hannibal‘s Bedelia interacting with Will in the latter half of Season 3 — but is there a chance her scenes will be part of some back-from-the-dead, fever-dream hallucination? The way she keeps taunting Dr. Lecter makes me nervous. —Billy
Ausiello: We asked Gillian Anderson if she knew what was in store for her when her enigmatic therapist got on a plane with the titular psychopath at the end of Season 2, and here’s what she had to say: “[Series creator] Bryan Fuller likes Bedelia on the show, so I knew that she wouldn’t be stepping into immediate certain death [in Season 3] — that there would be a little drama that would take place prior to her demise.” Perhaps the lack of a qualifier (i.e. “possible” or “potential”) before the word “demise” was just a slip of the tongue, but (gulp) here’s hoping said tongue doesn’t wind up as the key protein for a dish from Hannibal’s European Adventures in the Culinary Arts. 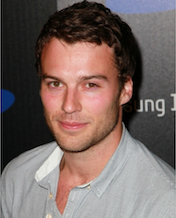 Question: Will Heroes Reborn give us answers to any of the questions that were left unsolved on Heroes? —Klaus
Ausiello: Beats me. There is one mystery I can clear up for thought. Rookie Blue‘s Peter Mooney wasn’t fibbing when he revealed in a recent fan Q&A that he was going to be in Heroes Reborn. An NBC rep confirms that the actor will appear in multiple episodes of the revival. Who will he play? Beats me!

Question: Is there any hope for Rookie Blue‘s Dov and Chloe? —Robin
Ausiello: The former couple’s interaction is pretty strained in this Thursday’s premiere. But don’t lose faith, Robin! “They’re perfect for each other,” executive producer Tassie Cameron declares. “They both messed up. Dov overreacted. Chloe was a goof. But we love those two together. So yes, there’s hope.”

Question: The first day of filming for The X-Files revival was a whirlwind of spoilery goodness, but since then things have been pretty quiet. Please tell me you’ve got a crumb you can toss to us philes. We want to believe! —Hayley
Ausiello: The scoop is  right here: The Darin Morgan-penned and -helmed third episode bears the title “Mulder and Scully Meet the Were-Monster,” and it centers on a nondescript man by day/scurry-ass beast by night.

This AAnd That…
♦ Word around the White House is that House of Cards Season 4 will introduce a couple who are the mirror image of Frank and Claire, only younger and (possibly) more British.
♦ Newly-leaked Secrets & Lies spoilers concerning the identity of the Season 2 victim left out a key fact about the dearly departed that makes her death considerably more tragic.
♦ The buzz on Bill Murray’s Netflix Christmas special is quite merry. I hear A Very Murray Christmas, co-written and directed by Sofia Coppola, is very funny — and that Miley Cyrus steals the show with her performance (yep, you read that right).
♦ I just received a piece of 2015-16 TV season intel that is going to leave a certain fandom shaken, stirred and seriously pissed off — sort of how you’re feeling right now after reading this vague, cryptic tease.