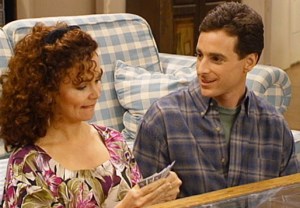 Things may not have worked out between Danny and Vicky on Full House — much to the disappointment of fans — but when Fuller House premieres on Netflix in 2016, fans will see that the head of the Tanner family has finally landed himself a new (and much younger!) wife.

TVLine has learned exclusively that the revival series is casting the recurring role of Teri, a 40-year-old African-American woman described as “attractive, vivacious … and youthful.” She also apparently has “quite an appetite for Danny and isn’t afraid to shower him with affection.” (In other words, get excited for some hot Bob Saget PDA.)

In other matrimonial news, the series is also casting the recurring role of Fernando, Kimmy’s “inappropriately passionate” ex-husband. Like Teri, Fernando has “quite an appetite” for the opposite sex, which is partially why he and Kimmy are no longer together. That said, he’s “relentless” in his attempts to reunite with his ex-wife, and he maintains a close relationship with their daughter Ramona.

In case you’re not up to speed on all things Fuller House, here’s a quick de-brief: the 13-episode sitcom will follow a single Stephanie, a widowed/pregnant DJ and a divorced Kimmy as they move in together and start a whole new life. Tanner family members Danny, Jesse, Joey and Becky will also appear, though neither Mary-Kate nor Ashley Olsen will reprise the role of Michelle. (And don’t even ask about Comet; it’s just too painful.)

Your thoughts on Danny and Kimmy’s new marital statuses? Drop ’em in a comment below.