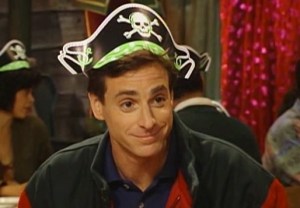 The leanest, cleanest Tanner of all has finally RSVP’d to the family reunion.

The long-awaited announcement came in the form of a late-night tweet from the actor/executive producer:

Last but not least-best piece of casting yet. The great @bobsaget will be joining our show on @netfilx – this completes the perfect reunon!

Stamos’ announcement didn’t specify in what capacity Saget will appear — regular, recurring, etc. — but we’ll take what we can get for now.

Earlier in the day, Lori Loughlin confirmed she’ll also reprise the role of Aunt Becky. In fact, the only original member of the Tanner family not returning for the revival series — in which DJ, now a pregnant widow with two children, moves in with sister Stephanie, best friend Kimmy and Kimmy’s spawn — is Michelle; Mary-Kate and Ashley Olsen have politely declined any involvement.

Full House faithful, are you pumped to have Saget officially in the fold? Drop a comment with your hopes for the Netflix series below.