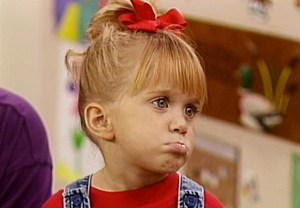 Someone tell Danny not to bother saving a seat for Michelle at the Tanner family dinner table.

Neither of her portrayers — Mary-Kate or Ashley Olsen, respectively — are set to appear in Netflix’s Fuller House, according to the series’ executive producer Robert L. Boyett.

“Although Ashley and Mary-Kate will not be a part of Fuller House, I know how much Full House has meant to them, and they are still very much considered family,” Boyett said in a statement to The Hollywood Reporter. “It has been exciting to see how they have built their professional careers, and I support their choice to focus on their fashion brands and various business endeavors. I appreciate their support and good wishes towards Fuller House.”

Fuller House centers around former Full House cast members Candace Cameron Bure, Jodie Sweetin, and Andrea Barber, now all-grown-up and living together following the death of DJ’s husband. (Don’t worry, it’s not Steve.) Additional Tanner family members are set to appear throughout the series, though it looks like Michelle won’t be counted among them.

Are you disappointed by the Olsens’ absence from Fuller House? Or are you not surprised? Drop a comment with your thoughts on this development below.