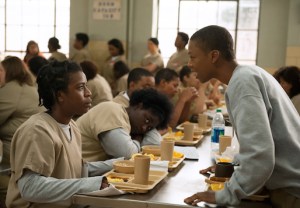 When visiting hours resume at Orange Is the New Black‘s Litchfield Penitentiary later this week — Netflix releases Season 3 in its entirety on Friday — the inmates will find themselves without the leadership of the women who (officially and unofficially) ran the joint.

Who might step up and grab the brass shiv? Laverne Cox has some thoughts.

“It’s interesting that the kitchen is the center of power,” the actress tells TVLine. “Gloria’s got that on lock, still, but there’s some issues.”

Let’s not count Cox’s Sophia out, either; though she’s shown no interest in Litchfield domination — “Sophia has her own little gig” in the beauty shop, “which is pretty cushy,” Cox notes — the actress says that the upcoming episodes put Ms. Burset in “some contentious situations.”

She adds: “I’m really curious to see if the audience continues to like Sophia after this season.”

“In our prison, up can become down and top can become bottom very easily,” Cox’s castmate Uzo Aduba teases. “Alliances and tribes, how important those things are — and everchanging.”

TVLine talked with series stars Cox, Aduba and Taylor Schilling for some inside intel on what creator Jenji Kohan has planned for the dramedy (which has already been renewed for a fourth season). Though they’d have to do time in the SHU if they revealed too much, read on for a few choice bits of scoop they managed to smuggle past the guards.

CRAZY EYES ON THE PRIZE | Suzanne “Crazy Eyes” Warren put her trust in Vee last season and wound up taking the fall for the older woman, who shamelessly exploited her. The experience, Aduba says, left a mark.

“In the case of Suzanne, we’ve watched someone who has been an idol worshipper in the past. This season, it’s interesting to see what it is she chooses now to put her faith in,” she explains. “It could be anything. She does find bootstraps and strings. How she laces them is the question.” 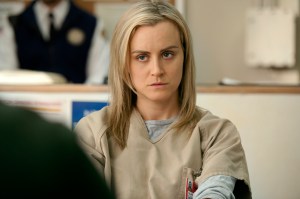 PIPER UNPEELED | Piper’s life, prior to prison, “was colored by what she believed the status quo to be, how she was brought up and how she was socialized, essentially,” Schilling says. As Litchfield continues to strip away that socialization, the new season finds the former Brooklynite “having to actually negotiate with some of her honest experiences and who she is in raw form.”

If it sounds untidy, Schilling says, well, it is. “I keep talking about it as a cracking-open. It’s messy, but I don’t think that change is a bad thing. It’s on the road to authenticity.”

PARENTAL CONCERNS | “There’s a tremendous sense of powerlessness that Sophia has around her family,” Cox says, previewing a season that will find an adolescent Michael wanting “a father more than a second mother, and she’ll try to negotiate and navigate what that looks like.” The subject, she adds, “presents Sophia with some of the most challenging things that we’ve seen from her to date.”