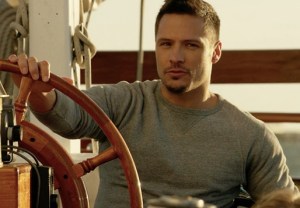 Sunday will mark four weeks since Jack and Amanda sailed off into the sunset on Revenge‘s series finale, but that doesn’t mean we’re done talking about it — and neither is Nick Wechsler.

TVLine caught up with the actor formerly known as Jack Porter at the ATX Television Festival, where he happily broke down his thoughts on the show’s farewell hour, including what we didn’t see during his final scene with Emily VanCamp. (Hint: the phrase “it was just terror” comes up.)

TVLINE | Barry Sloane told us he approved of the ending because Jack and Emily were always meant to end up together. Do you feel that’s the ending we were meant to see?
In a way. I spoke with someone recently who told me they thought it was so good that it was bad, like it was too exactly what you would have expected from the beginning, and I kind of agree with them. I think it was basically what a lot of fans wanted, and I wanted something unexpected. I wanted to make a harsher comment on revenge and it’s consequences, so I wish we could have done something a little darker.

TVLINE | Personally, I was glad to see Jack and Emily get a new Sammy — though what a weird wedding gift. So much responsibility.
[Laughs] What a weird wedding speech! I just brought up all these dead people, I don’t know why I did that. … But as long as it works for the fans, that’s all that matters. Being on the inside, I have different ideas about how I’d like to see it done, but if it feels rewarding to the fans, I’m happy. 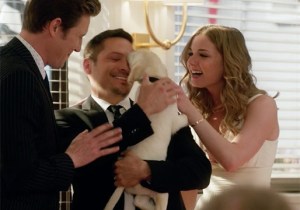 TVLINE | Who was watching Sammy 2.0 while Emily and Jack took off on the boat?
Oh man, who knows? He was probably getting knocked around downstairs. … By the way, when we were shooting that scene, it was dire. The waves were choppy as s–t, and the guys who take the boat out for the person who owns it told us it only gets that bad about four times a year. It was really insane. They had to cut around it. In those big shots, and even the one where Emily’s sleeping … oh, God, it was a nightmare. I just think it’s hysterical that if you could zoom in on our faces in that final moment, it was just terror.

TVLINE | Looking back on the four seasons, do you have a favorite Jack moment?
Most of my favorite moments were with Emily. When Sammy died, it was a brutal, honest, open moment. She was a great scene partner for those kinds of things. We both look back on that scene and think, “F–k, that’s one of the proudest moments we had.” I also really liked when I went after Amanda in the hotel room to confront her and she wants the tapes … that was another scene I really loved. And when I lost Amanda and was in the hospital and had to try to take down Conrad. Jack spent a lot of time in the hospital.

TVLINE | Sometimes because of Courtney Love! What was it like working with her?
I never thought I’d be doing a scene with her. I actually didn’t do the fight sequence with her; I did it with a stunt double. So they had me lay down, then Courtney Love straddles me and threatens me with a knife and then they cut. That was it. Like, “Nice to meet you!”

Revenge fans, what are your thoughts on the series finale, four weeks later? Drop ’em in a comment below.