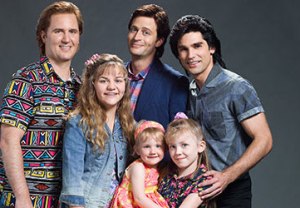 That’s when Lifetime will debut its The Unauthorized Full House Story, the network announced Thursday.

Capitalizing on the buzz about Netflix’s forthcoming Fuller House, which is a spinoff of the beloved ABC sitcom, The Unauthorized Full House Story will be a behind-the-scenes tell-all in the vein of the cabler’s The Unauthorized Saved by the Bell Story.

Stay with me here: The actresses playing the actresses playing the Tanner girls — who will be shown at multiple points in their growing-up — are: Shelby Armstrong and Brittney Wilson (Rogue) as Candace Cameron; Dakota Guppy (The Returned) and Jordyn Olson (The Unauthorized Saved by the Bell Story) as Jodie Sweetin; Blaise and Kinslea Todd, Calla and Tyla Jones and Kylie and Jordan Armstrong as Mary-Kate and Ashley Olsen in toddlerhood, at age 6 and at age 9, respectively.

Aislyn Watson (Motive) and Jaime Schneider (The Killing) will round out the cast as the younger and older versions of Andrea Barber.

Get a gander at the ensemble in the photo below, then hit the comments: Did the casting director do a good job? And do you plan to watch?