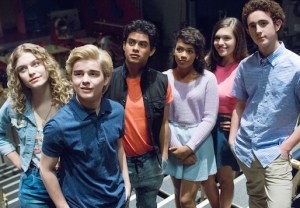 Lifetime on Monday night presented The Unauthorized Save by the Bell Story, a made-for-TV movie inspired by Dustin Diamond’s 2009 tell-all and in part produced by Diamond — as if the conspicuous focus on Screech’s portrayer and his assorted dramas/demons wasn’t your first clue.

The telepic starred young actors boasting varying degrees of likeness to their SBTB counterparts, ranging from “Ooh, close” (for the Lark Voorhees/”Lisa” character) to “Um, did the casting director have any idea what Mario Lopez looks like?”

Among the movie’s many “revelations”/claims, it would have us believe that:

* Future Beverly Hills, 90210 star Jennie Garth was up for the role of Kelly, but didn’t make the cut.

* Elizabeth Berkeley, at age 17, was well-schooled on the tenet of television situation comedy also serving as a vehicle for delivering socially resonant messaging a la All in the Family and M*A*S*H — as evidenced when she made the case to castmates for SBTB tackling serious issues.

* Diamond would pull lame practical jokes backstage… and then wonder why no one took him seriously or fancied him a heartthrob.

* Diamond entertained hard-to-watch fantasies about being muscle-bound and climbing into hot tubs with sexy gals.

* Diamond once KO’d a mouthy brat in a movie line, with two punches.

* A waiter in France volunteered to serve wine to Gosselaar and Tiffani Amber Thiessen, who because of this telepic’s casting perhaps collectively looked old enough to drink.

* Diamond was blackmailed by a hanger-on (who you would not be faulted for suspecting was imaginary for much of the movie), after failing to score the wannabe actor a plum role on SBTB.

Which reveals from The Unauthorized Save by the Bell Story most intrigued you? And what did you think of the “tell-all” as a whole? Kind of a rushed ending, right? And why the White Collar and Franklin & Bash disses during the “Where Are They Now?” rundown? And which TV series (Glee) would you next like to see (Glee) Lifetime tackle next (Glee)?