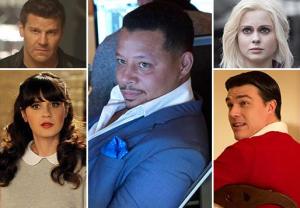 Question: Do you have any scoop on Bones? It’s been such a dark season for the show, so there has to be some light at the end of the tunnel that would potentially set up a somewhat happier 11th season, right…? —Cassidy
Ausiello: Yes, things have gotten quite cloudy over the Jeffersonian — and this week’s episode throws a few more curveballs at beleaguered Booth and Bones, especially when one decides not to invite the other to an important event. The looming question becomes: Can Temp set aside her reliance on facts and instead let her heart lead? As for a “somewhat happier” Season 11, you’re much more likely to find yourself asking after the finale, “How can there be any Season 11?”

Question: Did you happen to score any Empire scoop at Sunday’s Critics Choice Awards? —Mark
Ausiello: Sure didn’t. I was way too busy trading gossip with my tablemate Jessica Lange to do any actual work. Luckily, Vlada Gelman hit up Empire‘s Emmy FYC panel last Friday and managed to coax two respectable scoops out of exec producers Ilene Chaiken and Danny Strong: There will be a time jump between Seasons 1 and 2 (although neither would specify how big it would be); and when the show returns on Sept. 23, Lucious will still be in prison. But he’ll be a busy little jailbird. “Lucious can do what he does no matter where he is,” teased Chaiken. “Lucious, basically, has tentacles.”

Question: Will Chris Rock and Alicia Keys be playing themselves on Empire next season? —Jennifer
Ausiello: Nope. They’ll be playing characters.

Question: How will Fear the Walking Dead coexist (narratively-speaking) with the original series? —Jacob
Ausiello: Very carefully. “There are certain rules that have been set up and established in the first show that we can’t break from,” concedes the spinoff’s showrunner Dave Erickson. “We also need to make sure that we’re not stepping on each other’s story.” Luckily, the EP is “far ahead in” Robert Kirkman’s comic and, as a result, “can hopefully” steer clear of repetitive plots. It also helps that several of the offshoot’s EPs — Kirkman included — also work on Walking Dead: Original Flavor. “There are a lot of people who know this world really well,” Erickson points out. “So even if I were to miss something, [others] would jump on me in the first 30 seconds of the script going out.”

Question: Hey Aus, I’m gonna cut right to the chase: Since we haven’t seen Sin Rosetro’s new face yet, what are the odds that Bridget Regan will be returning to play this delicious bad girl when Jane the Virgin returns? —Tori
Ausiello: I actually don’t have an answer to that question. To make it up to you, I can confirm that Season 2 will introduce Rafael’s mysterious half-brother. That’s an even trade, yes?

Question: New clone alert on Orphan Black?! What’s her deal? —Calvin
Ausiello: As you saw in the promo, Crystal does indeed make her formal entrance this Saturday, and she’s quite chatty about her time with the Castor twins while giving Delphine and Felix(!) manicures. (BTW, Jordan Gavaris gets to break out his natural accent during the mani-pedi appointment.) BONUS SCOOP: Helena is not the only one moving in with Alison and Donnie.

Question: Big iZombie fan here, and I still have not recovered from Lowell’s death. What is Liv’s love life going to be like now? Will she hook up with Major by the season finale? —Affiong
Ausiello: Last I checked, Major had been kidnapped by Blaine, so I doubt a reunion with Liv is high on his to-do list (especially since his current predicament becomes even more dire in next Tuesday’s finale). Also, if you’ve been iffy on Liv’s do-gooder ex thus far, there’s an epic sequence in the season-ender that I have a hunch will make you a Major believer.

Question: Will Fritz (played by Jon Tenney) be making any appearances on Major Crimes this season? —Linda
Ausiello: Though the potential S.O.B. spinoff got snuffed by new TNT management, the Special Operations Bureau itself will be seen again, led by Deputy Chief Fritz Howard. “Yes, Jon Tenney will be in Episode 7,” series creator James Duff told Matt Mitovich, “when we have two officers shot to death during what looks like a routine traffic stop.”

Question: How many episodes of New Girl will Zooey Deschanel miss next season due to her maternity leave? —Joanne
Ausiello: Originally, the mom-to-be was slated to miss four episodes. But then Fox pushed New Girl‘s Season 5 premiere to midseason, so that number has subsequently been cut to just one.

Question: Can you tell me something about Orange Is the New Black Season 3? —Miriana
Ausiello: Laverne Cox tells TVLine that Sophia’s storyline will “heat up more in the second part” of the upcoming season, which drops June 12. She adds coyly, “The first six episodes are hints of things to come.”

Question: Oh great and powerful, I wouldn’t bug you, but there are no web series on your renewal scorecard. Selfishly, the only one I care about is Community. Any news on a Season 7? —Doug
Ausiello: Firstly, you seemingly weren’t looking at our Cable Renewal Scorecard (where we tuck away all the non-broadcast goodies). But at this point, a movie seems far more likely than a seventh season. With much of the cast already committed to new shows — Gillian Jacobs/Netflix’s Love, Ken Jeong/ABC’s Dr. Ken, Paget Brewster/Fox’s Grandfathered, etc; — “It would be easier to make the movie than another season,” acknowledges Jacobs. What’s more, this week’s Season 6 finale truly felt like a series finale, on screen and (per Jacobs) off. “In previous years, I’ve always been in denial, like, ‘No, we’re coming back!’ [But] this year, our contracts are up. The future is very uncertain. And, for once, it’s not because of network disdain or lack of interest. We’ve just done it for six years and there’s a very different feeling.”

This AAnd That…
♦ American Horror Story: Freak Show standout Finn Wittrock is circling another Ryan Murphy series — the only question is, which one? “I will be back in the Ryan Murphy universe in some capacity,” he hinted at Sunday’s Critics Choice Awards. “How exactly that’s going to manifest, I still honestly don’t know.”

♦ Remember the “bonkers leading lady” blind item I embedded in a recent Ask Ausiello? I hear the the situation has worsened considerably in the two months since that item posted. In fact, the very real possibility exists that She Who Shall Not Be Named may not be around for the entire upcoming season.
♦ Pilot watch 2015: CBS’ Limitless is sensational. This could be the show that propels Greek‘s Jake McDorman into the stratosphere (where he should’ve been already!).