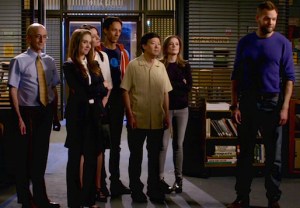 That has to be it, right?

“Emotional Consequences of Broadcast Television” found Elroy exiting for a West Coast gig at LinkedIn, Annie leaving for a D.C. internship with the FBI and Abed departing to Los Angeles to work as a production assistant on a new Fox sitcom.

Though the last shot of the Nipple Dippers faded to black and the hashtag “#andamovie,” even Abed acknowledged that the notion of “#SixSeasonsAndAMovie” was more of a pipe dream than a practical business or creative decision. And so this current iteration of Community came to an end with Jeff realizing the best thing he could do for his friends was to put his own insecurities aside and accept the fact that life moves on.

Before we start Troy crying, here’s a brief summation of the episode — plus thoughts on any possible extension of the Greendale brand:

ADVANCED REMEDIAL CHAOS THEORY | With their sixth year at Greendale officially behind them, and the community college ranked No. 2 by GreendaleCommunityCollege.com officially saved, the current version of the Greendale 7 pondered what life might look like following summer vacation.

After Abed declared the unlikelihood of a seventh season, the rest of the gang (minus Annie, who was off on an internship interview) filled in with their own visions of an alternate reality where Season 7 is a go. Though Abed agreed that the return of Shirley would get the show “back on formula” — paving the way for Yvette Nicole Brown’s brief return in multiple versions of the future — no show that hemorrhages characters as fast as latter-day Community has been forced to do has ever peaked in its seventh year.

After versions of a continuation that found Dean Pelton stripped down to a diaper, Chang inventing a new animated friend and Britta leading Greendale as a sovereign nation, it became quite clear that now was the time to wrap things up. And though Jeff, Britta, Chang, Pelton and Frankie would continue their lives as-is, the group’s youngest and brightest minds were off to face the world that once scared them into enrolling at Greendale Community College — a world where a happy ending for Jeff and Annie would’ve been Dan Harmon playing it safe.

SEVEN SEASONS AND A MOVIE? | To paraphrase the great Elroy Patashnik, the current Community brand is “unique, simplistic, phonetically-memorable gibberish.” Why on Earth would we want to go disrupting that for the sake of defying the odds of survival again? If Abed were indeed a real human being — no pun intended — he would never want Harmon to “Scrubs Med” the show for the sake of creating more product. There’s an argument to be made for a movie that finds the original Greendale gang (presumably sans Chevy) saving Troy and LeVar Burton from those pirates, but at this point it’d feel more like fan service than anything else.

After surviving the darkest timeline, a gas-leak year and a transition from broadcast television to an improbable new home at Yahoo, it might be time to accept that the end has come and file for graduation. Against all odds, we got 110 episodes of a show that broke all the rules and expectations of a traditional sitcom, and that’s pretty cool… cool cool… cool cool cool.

But enough about what we thought! What did you think of Community‘s sixth season finale? Did it provide the closure you need if the movie doesn’t happen? Grade the episode in our poll, then sound off in the comments.