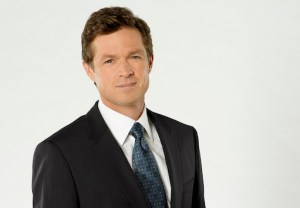 Nashville‘s Eric Close, whose character was taken away in handcuffs at the end of the ABC drama’s third season, will not be a series regular in Season 4, TVLine has learned exclusively.

RELATED Nashville EP on the Mystery Flatliner, Hope for Juliette and Why the Hospital Wedding Almost Really Happened

ABC declined to comment, but we’re hearing Close’s status change is part of a larger creative effort to place the focus of the show squarely on the music business.

For three seasons, it seemed as if Teddy had been starring in his own satellite show about local Nashville politics. His penchant for making terrible decisions finally caught up to him in the third season finale, when the Feds arrested him for frequenting a high-priced call girl and then embezzling official funds to pay her off.

However, the character’s strong ties to Rayna (Connie Britton) — he’s her ex and they have two children together (one biologically) — likely ensures that we have not seen the last of him. In fact, a source tells TVLine that there’s a very good chance Close will be back as a guest star.

In the meantime, Close is set to reprise his Suits role of lawyer Travis Tanner for one episode in the USA drama’s upcoming fifth season.