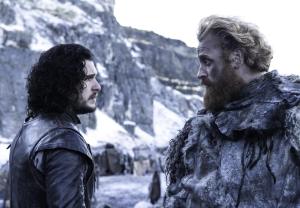 To paraphrase Jaws: I think we’re gonna need a bigger piece of dragonglass.

This week’s Game of Thrones finds Jon fighting the biggest (and scariest) battle yet — and losing big — against the frozen army of the undead. Elsewhere, forget the thrilla in Manilla: It was a scene in Meereen when Tyrion Lannister finally had an official audience with Daenerys Targaryen.

To find out how both of these situations resolved, read on as we recap “Hardhome.”

HOUSE TARGARYEN | Daenerys is skeptical that Tyrion, who stands next to Jorah before her in her official chamber, is worth keeping around — especially because his family killed hers. “I am the greatest Lannister killer of all time,” he points out as he launches into an impressive bid to become one of her advisers. OK, smart guy, she says, what should become of Ser Jorah? Tyrion weighs the situation. On one hand, “He worships you. He is in love with you, I think,” Lannister points out, BECAUSE HE HAS EYES. Look at the painfully hurt looks Jorah and Daenerys exchange while Tyrion talks! Still, killing those who are devoted to you doesn’t engender devotion in others, Tyrion says, so Dany lets the old knight live — but banishes him from the city. As he’s escorted away, the heartbroken Jorah sees that the greyscale on his arm is spreading. He later finds the man who bought him and Tyrion and asks for another chance to fight in front of the queen.

That done, Tyrion and Daenerys share some wine and commiserate about having vicious fathers. “I had given up on life until Varys convinced me you might be worth living for. If you chop off my head, well, my final days will have been interesting,” Tyrion says, in a conversation that is pretty damn great. The upshot: She lets him live and brings him on as an adviser; he quickly gets to work serving up some real talk about how she’s virtually without support in Westeros, but she indicates that she wants to create a new world order: “I’m not going to stop the wheel, I’m going to break the wheel.”

HOUSE STARK: A-GIRL-IS-BECOMING-SOMETHING-ELSE EDITION | Arya’s education continues as she adopts the persona of an oyster-seller named Lana whom Jaqen sends to assassinate a crooked ship owner at the docks.

HOUSE LANNISTER | Fornication, treason, incest and the murder of King Robert — those are the charges being brought against a very rough looking Cersei, who remains defiant in her dirty little cell. Her shady maester visits with the news that everything is going south at the castle, so maybe she should confess and end it all? A straggly-haired Cersei answers that with a heaping helping of “NOPE,” so he leaves and cryptically says, “The work continues.”

Later, we watch a parched Cersei desperately lap water off the ground rather than confess and sip from the dipper she’s offered. Yeah, I feel a little bad for you, Queen Mum, but damn if that visual isn’t really, really satisfying.

HOUSE STARK: THE-TRUTH-WILL-OUT EDITION | Sansa and Theon have a little catch-up session, in which he recaps everything that happened to him in the time they’ve been apart. She’s unsympathetic — “If it weren’t for you, I’d still have a family. If I could do what Ramsay did to you right here right now, I would,” — she spits, but when he slips that the boys he burned weren’t Bran and Rickon, he inadvertently gives her more hope than she’s had in a very long time. Now let’s just hope he doesn’t run to Ramsay with news of his verbal diarrhea…

THE MEN OF THE WALL | Ollie goes to Sam to ask for some clarity on Jon’s mission beyond The Wall. “How can he trust them?” says the boy, whose family was killed by a band of wildlings led by Tormund, and he’s got a point. But Sam preaches the wildlings-are-people-too gospel, adding that Jon knows what’s best for everyone.

That may be true, but it sure doesn’t feel true as Jon, Giantsbane and the rest arrive at Hardhome, a giant settlement of free folk. The wildlings there don’t understand how Tormund and Jon are allies, and when the leader gets nasty about it, Big Red beats the life out of him — literally. “Gather the elders, and let’s talk,” Giantsbane says. (Ha!)

Jon then makes an impassioned plea for both groups to work together to beat the white walkers and the wights they command, and when he passes around a satchel of dragonglass, they start to listen. “The long night is coming and the dead come with it,” he tells them. And with Giantsbane’s seal of approval, many of them — though not the Thenns in attendance — slowly get on board.

The exodus is happening when suddenly all of the dogs in the encampment start barking. It soon becomes clear that the wights are attacking en masse, which speeds up the departure considerably. Those little dead jerks are persistent, climbing the gates, tunneling under walls and generally massacring the Wildlings who haven’t been able to get on boats. Even though he realizes that the situation likely will not end well, Jon leads a charge of Night’s Watch men to the front of the battle to buy the escapees more time.

Let’s shorthand the fight: Blood, snow, dead things, running, arrows, creepy zombie children, a giant, bones, more dead things. At one point, Jon realizes that figures on horseback are watching the melee from afar — he and the Thenn run into one of those creatures when they go to retrieve the bag of dragonglass. The thing (similar to what Sam saw at the end of Season 2) looks like the bad guy from Ghostbusters 2 and lands a bunch of good blows on Jon… until Jon pulls out his sword made of Valryian steel and turns the creature to dust.

The battle is beautifully shot and terrible to watch; Jon and his men get away at the last moment, but this is in no way a victory. Another one of the commander dead guys (who I am led to believe is  known as the Night’s King) strides to the end of the pier and locks eyes with a retreating Jon, then with a gesture raises all of the dead the wights just killed. The scene is chilling in more ways than one.