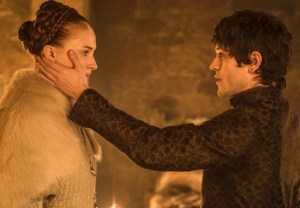 Sunday’s Game of Thrones gave viewers plenty of reasons to throw up their hands in anger — Loras’ trial scene alone made my blood boil — but one moment is drawing particular ire from fans of the HBO series, specifically those who have also read George R.R. Martin‘s books: the brutal rape of Sansa Stark by her new husband Ramsay Bolton.

The horrific event, which Theon Greyjoy was also forced to watch, wasn’t exactly faithful to Martin’s text. In fact, Sansa’s rape never happens in the books because Ramsay actually marries Jeyne Poole, a minor character we haven’t seen on the show since Season 1.

And while outrage is the general response from fans today — a quick Twitter search reveals that a large number of viewers are considering dropping the show altogether — Martin is choosing to defend the controversial alteration to his story.

He writes on his official LiveJournal:

There have been differences between the novels and the television show since the first episode of season one. And for just as long, I have been talking about the butterfly effect. Small changes lead to larger changes lead to huge changes. HBO is more than forty hours into the impossible and demanding task of adapting my lengthy (extremely) and complex (exceedingly) novels, with their layers of plots and subplots, their twists and contradictions and unreliable narrators, viewpoint shifts and ambiguities, and a cast of characters in the hundreds. … Prose and television have different strengths, different weaknesses, different requirements. David and Dan and Bryan and HBO are trying to make the best television series that they can.

–
Martin might not specifically mention Sansa’s rape in his entry, but by addressing all of the changes made, it’s safe to assume he’s also referring to the scene in question.

Taking this into account, how do you feel about Sansa’s wedding-night assault? Did it completely cross a line, or was it a necessary — albeit unspeakable — plot device to display Ramsay’s horrific nature? Drop a comment with your thoughts on the controversial scene below.