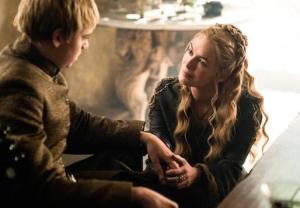 Forget the “unofficial start of summer” — winter is still coming. And if the White Walkers aren’t going to take a week off, kick back and enjoy a Memorial Day barbecue or two, well, then, neither is Game of Thrones.

So we have for you a holiday weekend recap that includes the following items: dragonglass, a slit throat, a deflowering, a comeuppance, the death of a beloved character, a really long distance to go for a compliment, a reunion and Margaery’s worst hair day ever.

Wanna know how they all fit together? Read on as we review what takes place in “The Gift.”

RELATED Quotes of the Week From Game of Thrones, The Flash, Late Show and More

THE MEN OF THE WALL | Most of Jon Snow’s brothers think he’s insane to be going on a mission with Tormund Giantsbane — yes, yes, Ollie, the Lord Commander sees your stinkeye — but at least Sam gives him a piece of dragonglass and a hug before he takes off.

Elsewhere at The Wall, Maester Aemon is dying. Sam and Gilly and the baby sit with him until it’s over — then Sam gives a really beautiful eulogy. “He was the blood of the dragon but now his fire has gone out, and now his watch has ended,” Sam says before lighting the old man’s pyre ablaze.

Later, when two of his brothers get very inappropriate with Gilly, Sam draws a sword and tries to defend her. Though it looks like the men have beaten him unconscious, he gets up in time to drop a killer line —”I killed a white walker. I killed a thenn. I’ll take my chances with you” — and buy himself enough time for Ghost aka MY FAVORITE DIREWOLF OF ALL TIME to come out of nowhere and sends the would-be rapists running. As Gilly cleans his wounds, she says he was stupid to risk himself for her, and makes him promise to take care of the baby no matter what. Of course he pledges to protect both little Sam and his mama, which earns him some wildling lovin’. Commentary, dear, de-virginized Sam? “Oh, oh… oh my!”

HOUSE STARK | Reek brings Sansa a meal, and she begs him for help. “Do what he says or he’ll hurt you,” he says. “He already hurts me every night,” she tells him. She’s visibly bruised and it’s terrible. She urges him to help her by lighting the candle in the tower, which you’ll recall is her secret signal to “friends” — aka Brienne — that she needs help. He doesn’t want to go against Ramsay’s wishes, but Sansa isn’t taking a stuttering, averted-eyes no for an answer. “Your name is Theon Greyjoy, last surviving son of Balon Greyjoy, Lord of the Iron Islands,” she says, grabbing him and making him promise to help. “Do you hear me?” So he determinedly leaves… and makes a beeline for Ramsay.

It’s no surprise — though it’s terrible to see — when Ramsay trots Sansa out into the snowy courtyard to show her that he’s flayed and killed the old woman who carried Brienne’s message to her. With the knowledge that Theon betrayed her, Sansa quietly cries, tries not to despair-vomit and is led back to her room as Ramsay gloats. “You should hold onto your candles,” he says, and it seems like an appropriate time to mention that I want him to die. A lot. “The nights are so long now.”

HOUSE BARATHEON | “We march to victory or we march to defeat, but we go forward. Only forward.” Those are Stannis’ words to Davos, who counsels a return to Castle Black given the harsh weather and terrible conditions Stannis’ army faces so early in their trip. But privately, he questions Melisandre’s vision. The red priestess reasserts that all will go their way… but then casually suggests that they sacrifice Shireen to ensure their victory. “She’s my daughter,” he says, horrified. “Get out.”

HOUSE LANNISTER, FLIGHT-MEETS-FIGHT EDITION | When Jorah is bought at a fighter’s auction, Tyrion pipes up and says Mormont’s new owner must buy him, as well. “We’re a team,” he says, a little desperate, but then uses cunning and a little elbow grease to get himself bought by the same man.

As it turns out, both Jorah and Tyrion are brought to a pit that Daenerys and her husband-to-be are visiting that day. When Mormont hears the word “queen” uttered by the first round of fighters, he rushes to get a look and smiles so lovingly upon seeing his khaleesi, I can almost ignore the fact that a man’s head is burst like an overripe pomegranate moments later. Jorah grabs a helmet and leaps into the ring, so buoyed by seeing his beloved that he leaves everyone else bleeding in the sand. “Get out of my sight,” she says once he’s unmasked, but Tyrion’s sudden appearance — and gallant introduction — seem to change her mind.

HOUSE TARGARYEN | Daario is a little jealous of Daenerys’ betrothed, and offers an alternative idea: “Marry me, instead.” When she says she can’t just do whatever she wants, he responds, “Then you’re the only person in Meereen who’s not free.” Elsewhere in their pillow talk, he suggests that she gathers all of the masters in the city and slaughter them, and even on this show, that kind of talk shuts down their nookie pretty quickly. 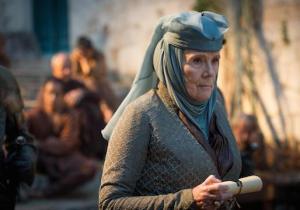 HOUSE TYRELL | Loras and Margaery’s grandmother visits the High Sparrow to plead for their release. Lady Olenna and the holy man are adequately matched sparring partners, but he won’t bend to her sharp tongue. “Your grandchildren will be punished in the same manner as anyone who breaks the sacred laws,” he says. She points out that her house is feeding King’s Landing, and when it is cut off, she’ll make sure the poor know who to blame. “You are the few, we are the many,” he warns. “And when the many stop fearing the few…” Gods help her, for perhaps the first time, Lady Olenna looks really worried.

So she meets with Baelish at the abandoned brothel, where she points out that their interests are aligned. “Together, we murdered a king. If my house should fall, I will have nothing to hide,” the old lady warns. So he gives her a “gift.” (More on that in a moment.)

Up at the castle, Tommen rages that he can’t free his wife — even though he’s the king! “You cannot blame yourself for fate,” Cersei says, sounding about as concerned as someone who can’t get her Sunday morning Sudoku puzzle to come out right. So when Cersei promises to intervene on Tommen’s behalf with the High Sparrow, he seems a little disbelieving. But then Lena Headey does a really lovely job of talking about her devotion to him and Tommen — which, of course, is pretty much the only thing she doesn’t lie about — and I can’t blame him for tearing up and believing her. (Probably because I do the same.)

When Cersei brings Margaery food and lies, the bedraggled queen whispers, “I know you did this” and eventually screams, “Get out, you hateful bitch!” Cersei nearly floats with happiness to the High Sparrow, who explains that Marg and Loras will be put on trial before seven septons — unless they confess first; then, their fates will be up to “the Mother’s mercy.” I’d listen closely, Cersei, when the holy man asks, “What will we find when we strip away your finery?” and then mentions how her cousin, Lancel, “unburdened himself” of all of his sins when he became one of the faith militant. Translation: High Sparrow has sniffed all of your dirty laundry, Cersei. So the Queen Mother is dragged, spitting mad, into a cell of her own. Karma!

HOUSE LANNISTER, TEEN-LOVE EDITION | Way over in Dorne, Myrcella doesn’t want to go home with her Uncle Jamie; she defiantly states that she’s staying there and marrying Trystane. And down in the dungeon, Bronn (who has a beautiful voice) talks a good game but then gets sidetracked when one of the Sand Snakes in the next cell unties her robe and starts seducing him. When he gets woozy and starts bleeding from the nose, I fear that perhaps she has an enchanted undercarriage… but then she reveals that she laced her dagger with a slow-acting poison, and that she’ll only give him the antidote (hanging from a pendant around her neck) if he says she’s the most beautiful woman he’s ever seen. No-brainer, eh Bronn? “I think you’re quite handsome, as well,” she snarks as he guzzles it down.