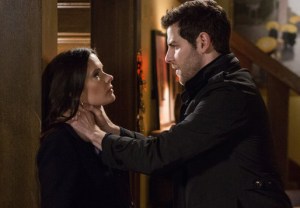 Grimm‘s fourth season finale gave new meaning to the phrase “fairy-tale ending” — particularly in regard to the love story between Nick and his Hexenbiest’d girlfriend, Juliette.

Quick recap: After an attack, when Nick was just about to avenge his mother’s murder by choking Juliette to death — and she begged him to do it — Trubel stepped in and put two arrows into the veterinarian’s torso. As Nick cradled his former love in his arms, she died on the floor of the home they shared.

Sad? Sure. But keeping in mind that Grimm is the same show that killed Capt. Renard in the Season 3 finale, only to revive him early in Season 4, TVLine went straight to the source for some answers to all of your burning questions.

“Sure looks like it,” adds series co-creator and EP David Greenwalt, laughing.

Are they telling the truth? What’s going on with Trubel and Agent Chavez’s group? Is Meisner back for good? Will Adalind ever see Diana again? And does Nick’s romantic future involve his blonde baby mama? Read on for all of these answers — plus scoop on next season.

TVLINE | Will Bitsie Tulloch be around in the next season?
KOUF | No, Juliette’s dead.
GREENWALT | She’s gone.

TVLINE | Are you being serious with me right now?
GREENWALT | As serious as we ever are! 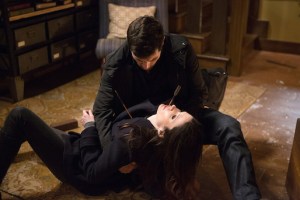 TVLINE | Nick experiences a lot of loss — his mom, Juliette — in a very short time. Moving into the next season, will he have space to process it? Or will he be running on blind fury for the foreseeable future?
KOUF | All the episodes are him, grieving. It’s 12 episodes of him, alone in a room, feeling bad.
GREENWALT | He’s going to have to do both because he’s got a lot of stuff to deal with personally, and he’s still got a lot of unsolved mysteries. And his relationship with the force will probably have to change a little bit.

TVLINE | Trubel fields a call from Agent Chavez during the episode, and then Elizabeth Rodriguez’s character shows up at the end. How quickly will we learn what she’s up to in the fifth season?
GREENWALT | Well, as quickly as we ever move.
KOUF | Like, at a snail’s pace.
GREENWALT | Yes, we’ll discover what she’s been up to.

TVLINE | You weren’t able to get Mary Elizabeth Mastrantonio back for the season’s second-to-last episode.
GREENWALT | We got part of her. [Laughs]

TVLINE | Did you try and it just didn’t work out?
GREENWALT | We really wanted her to come back and be in the show, and it didn’t look like it was gonna work out — through no fault of anybody’s.
KOUF | She was up for other things, a pilot and all that stuff.
GREENWALT | …It seemed like the right story move and it seemed more interesting to hear this fight off stage as Juliette is creeping downstairs. It seemed creepier for her to hear all of this than for us to try to stage a whole thing.
KOUF | It’s more emotional to see it on her face.

TVLINE | Let’s go back a minute to Nick not being able to kill Juliette, though Juliette seems to want him to in that moment.
KOUF | Yes. 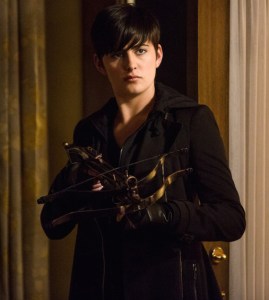 TVLINE | But then Trubel does the deed. Will that cause for any friction between her and Nick in the new season?
GREENWALT | Well, Trubel did what she had to do. What was the choice? Let Juliette kill Nick?

TVLINE | I know he told her to, but is he going to be that rational after the fact?
KOUF | And hold that against her? No. That’s my personal feeling: He’s gotta know, being a Grimm, that she had no choice if he were to survive.

TVLINE | Diana has aged considerably since the last time we saw her.
GREENWALT | She’s on a faster growth path.

TVLINE | Is that a thing that Hexenbiests normally do?
GREENWALT | It’s a thing in this particular instance that happens because of her lineage. Hexenbiest-Zauberbiest stuff.

TVLINE | Meisner is back! I had almost forgotten about him — did you hope the audience had put him out of their minds, so it would be a big surprise?
GREENWALT | Yeah. A big surprise to the fans and people who know the show.

TVLINE | Back when he was carting Adalind all over the place and delivering her baby, there was a certain sector of fans who wanted to see them pursue something more.
GREENWALT | They felt like they had some kind of affection going on, sure.

TVLINE | Will we see him in the fifth season?
KOUF | We hope so.

TVLINE | Does this mean that Adalind can now get her baby back? Or does it not really change anything for her?
KOUF | Obviously the resistance is involved, and the resistance has the child.

TVLINE | And the resistance was active in keeping Diana from her mom before, but that was because of Adalind’s proximity to the royals. Does the resistance have any beef with Adalind herself?
KOUF | Well, they probably don’t have a beef now that she’s not a Hexenbiest. But they don’t have a guarantee about how long that will last, either.

TVLINE | This may be too soon, but… Adalind and Nick are linked. Nick is now single —
KOUF | — and the father of her child.

TVLINE | — and the father of her child. Plus, she knows all of the secrets he normally has to hide from regular people who are close to him. Would you entertain the idea of pairing up Nick and Adalind?
GREENWALT | Well, something’s gotta happen, one way or the other. He’s gotta be responsible for the child.
KOUF | He’s got a child and he’s got to step up at some point. He knows he can’t abandon his child. He was abandoned.

TVLINE | Apart from that, for themselves, do you think Nick and Adalind could ever be attracted to each other?
KOUF | I think they have to try.