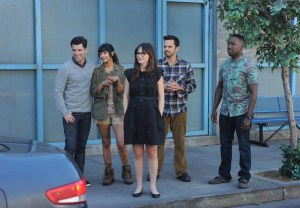 Prior to moving out of the loft and relocating to New York, New Girl‘s Coach pays a lot of lip service to ditching the past and moving forward with life. Isn’t it funny, then, that the Season 4 finale — in which he makes his exit — is all about the rekindling of two old romances?

Let’s start with the most obvious reunion: Schmidt and Cece. Inspired by Coach’s pre-move winnowing of belongings, Schmidt dumps his box of Cece memorabilia into a parking-lot donation receptacle… then immediately tries to get it back. When an employee from the charity (30 Rock‘s Jack McBrayer, oddly underused here) tries to stop him, Schmidt pays him off and returns home. Jess promised Cece not to interfere, but Ms. Day just can’t help herself: She finds a loophole in the vow by telling Nick “Cece’s in love with Schmidt!” — while Schmidt is standing right next to them.

So an exuberant Schmidt bids everyone goodbye and sets off to find his true love on Mt. Shasta, a task that takes all of two seconds. (She’s standing on the other side of the loft’s front door.) Why don’t you just watch the whole thing unfold? 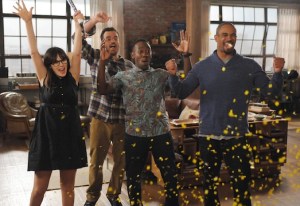 The lofties celebrate. (Of course Jess has a confetti cannon at the ready.)

Speaking of Ms. Day, the purging of personal belongings alerts the roommates to the existence of the “sex mug,” AKA the cup Nick and Jess used to secretly signal randiness when they were dating. When Winston points out that the mug was in the signal spot the week before — even though Jess and Nick haven’t dated in a year — it opens a conversation in which the exes admit they’re still turned on by each other.

“I’m not not thinking about it,” Nick admits when Jess presses him for how often he considers their coupling. And even though they eventually agree that things are great as-is, each of them clandestinely sneaks out to retrieve the mug from the trash (and each is surprised to find it missing). Seems like a Nick-Jess redux is in the works, no? (Oh, and if you’re wondering, Winston rescued the cup and is using it as Ferguson’s food dish. Hardly the oddest thing Winnie has ever done. Also, hi Ferguson!)

Finally, Coach bids his friends adieu as he and May take off for their cross-country move. And though he talked a good game about sloughing off the past, Coach can’t leave without crying with Winston and taking the Regis Philbin-endorsed crepe pan they ordered during a drunken night watching infomercials. Bye, Coach! Though New Girl often didn’t know what to do with you, we’ll miss you a lot! (Watch Damon Wayans Jr.’s final scene below.)

Now it’s your turn. Grade the season finale and the season overall via the polls below, then hit the comments to back up your picks!