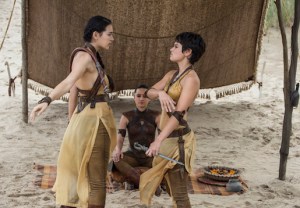 We knew Oberyn Martell’s daughters were going to be badasses. The much-missed Dornish prince (sniff!) put forth such a deadly sexy combination of swagger and combat skills, it makes sense that his kids inherited both his hotness (and his hot-headedness). In this week’s Game of Thrones, we get to see exactly how badass Martell’s offspring — known as the Sand Snakes — are.

Elsewhere, Melisandre is still hella shady, two of Daenerys’ closest advisors might not be long for their jobs (or their lives), and the High Sparrow now has an exuberant army.

That last one is no cause for worry at all, right? Read on as we review the events of “The Sons of the Harpy.”

HOUSE LANNISTER: I’M-ON-A-BOAT EDITION | Let’s start with Tyrion, whom Jorah tosses into a small, stolen seacraft. Not even a gag can stop Tywin’s younger son from talking, though, and he eventually makes sounds so annoying that Jorah takes the cloth out of his mouth. Naturally, Tyrion immediately demands wine. (Heh.) When the disgraced knight says the queen he referenced last episode is Daenerys, Tyrion finds that amusing. “What a waste of a good kidnapping,” he jokes, and I’d laugh, but the bobbing of the boat is conveyed so well in this scene that I’m getting a little queasy. Tyrion’s sharp eye for detail helps him deduce that his captor is Jorah Mormont; when Tyrion remembers that Jorah was spying on Dany for Varys (and, in turn, the Lannisters), he also correctly guesses that “Now you hope to win back her favor with a gift.” A drunken, mouthy gift. When Tyrion points out that the venture is risky and not likely to work, Mormont knocks him out to silence him.

Meanwhile, Tyrion’s brother (still looking yummy in that leather jacket, in case you were wondering) is on a sea voyage of his own. Jaime and Bronn are traveling on a merchant ship — the better to sneak into Dorne, he explains. When the boat passes Tarth, Brienne’s birthplace, he gives it a look of longing that’ll keep fanfic authors busy until the wee hours.

Down below, Bronn and Jaime have a conversation in which the older man makes it clear he knows that Myrcella isn’t just Jaime’s “niece” and that Jaime was the one who let Tyrion out of his cell the night that Shae and Tywin died. “Varys set him free,” Jaime says. So pretty, yet so deluded: No one’s buying what you’re selling, honey. But the Kingslayer isn’t lying when he angrily talks about his fugitive brother. “He murdered my father. If I ever see him, I’ll split him in two.”

The rest of the pair’s travels include paying off the merchant ship’s captain for his silence (a move Bronn thinks is foolish, given how much the Dornish people hate Lannisters), nearly being bitten by a snake (can you blame the reptile for wanting to draw near to that golden head? The snake’s last words: “Sssssssssssssso ssssssssssstunning.”) and getting caught by a quartet of men on horseback. When a story about being shipwreck survivors falls flat, Bronn starts the killing — and Jaime’s fake hand winds up being an advantage when one of the men’s swords gets stuck in it, allowing Jaime to use his opponent’s distraction to land the mortal blow. Once all the men are dead, Bronn’s all for moving on, but Jaime insists that they bury them. “Corpses raise questions. Questions raise armies,” he reasons.

Little does the duo know, Oberyn’s bastard daughters are already asking a lot of questions. As Ellaria Sand arrives at the women’s camp, she announces that Doran Martell won’t be any help: “We must avenge Oberyn ourselves.” The Sand Snakes (Nymeria, Obara and Tyene) are one step ahead of her: They’ve captured the captain Jaime paid, and they’ve buried him in the sand as scorpions climb his face. “You must choose: Doran’s way and peace, or my way and war,” Ellaria says. Now, what do you think they pick? 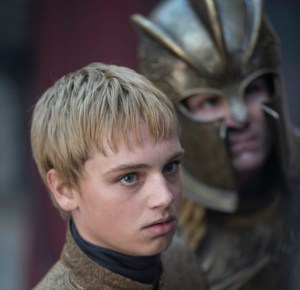 HOUSE LANNISTER: YOU-AND-WHAT-ARMY? EDITION | Cersei gets rid of one more pesky small council member by sending Lord Tyrell to Braavos to deal with the Iron Bank, which wants King’s Landing to pay up on a fraction of its debt. Ser Meryn Trant is Tyrell’s guard on the trip, so good luck making it back, dude. That guy will do anything a Lannister commands, and Cersei looks at you the way she looks at the bottom of an empty goblet: with derision and disgust.

Next on the Queen Mother’s To-Do list: Grant the High Sparrow a holy army, known as the faith militant, “in service to the gods themselves, and to you of course, as the chosen representative of the Seven.” And after she tips him off to the fact that Ser Loras is a knight who really likes swordplay, so to speak, the High Sparrows’ thugs — including the Lannister cousin we were re-introduced to a few episodes back — abscond with the Knight of Flowers.

“Why is my brother in a cell?” Margaery demands of Tommen, who has no idea what she’s talking about but will do whatever it takes — including confront his highly scary mother — to make sure that his wife doesn’t again give him the raised eyebrow of “Say goodbye to your new favorite pastime.”

Tommen’s meeting with Cersei is reminiscent of a kitten staring down a bulldozer, and it turns out to be just as productive: She reminds him that, as king, he can demand that the High Sparrow do whatever he likes… in theory. Because when he goes to visit the faith leader, his goons stop Tommen and his guards from passing. The Kingsguard offers to lay waste to everyone in their path, but Tommen says he wants to find another way. Congrats, son! You’re already 100 times the king your terrible brother was. Unfortunately, the new queen doesn’t feel the same way. Upon hearing that Loras remains locked up, the new queen sweeps out of the room, icily adding, “I have to send word to grandmother.” Look , I want to avoid holy war as much as the next guy, but anything that brings that awesome old lady back to King’s Landing is OK by me.

THE MEN OF THE WALL | Up north, Melisandre watches Jon Snow practice fighting with a Night’s Watch brother. The look on her face is one that Gendry probably still sees in his nightmares, which is why it’s not surprising when she shows up in Jon’s office later. She tells him to come with Stannis and his army when they march south. “Winterfell was your home,” she purrs. “Don’t you want to chase the rats out of it?” There’s more back and forth, but honestly, all you need to know is that she eventually plays to the cheap seats by opening her robe and putting Snow’s hand on her bare chest. “Do you feel my heart beating?” she asks. Oh he’s certainly feeling something… and that something is one of the red priestess’ perky holy places under his thumb. Though she straddles him and talks about the power of “joining,” he turns her down. “I swore a vow. I loved another,” he says, adding that he’s still in love with Ygritte, despite the fact that she’s nothing more than plucky molecules on the wind by this point. Melisandre puts her lords of light away and leaves him with this chilling thought: “You know nothing, Jon Snow.” The Lord Commander is shaken by her invoking Ygritte’s favorite saying, but somewhere, Gendry shakes his head and thinks, “No leeches? Dude, count your blessings.”

Meanwhile, Stannis makes me like him a little when he assures Shireen that he’s not ashamed of her and her greyscale-afflicted face. We learn she got it from a doll that a Dornish trader gave him, and that everyone wanted him to send her away to die. “I told them all to go to hell,” he says, embracing her. “You did not belong across the world with the bloody stone men. You are Princess Shireen of the House Baratheon. And you are my daughter.” Aww.

HOUSE STARK | Littlefinger finds Sansa in the Winterfell crypt, tells her he’s going to King’s Landing at Cersei’s request, and then forecasts a future in which Stannis takes Winterfell and names her the Wardeness of the North. “You are the last surviving Stark. He needs you,” Lord Baelish says in that way of his that makes everything sound really creepy. Sansa’s all, “Oh, someone’s going to do something to me about which I have absolutely no say? MUST BE MONDAY.” Littlefinger also has a contingency plan for her: If Stannis doesn’t show up, take Ramsay “and make him yours.” Then he kisses her on the lips, and can someone cover the eyes of the statue behind Sansa? Lyanna’s been through enough; she shouldn’t have to witness this.

HOUSE TARGARYEN | Barristan Selmy and Daenerys share a lovely scene in which he tells her that her brother Rhaegar used to go out into the streets and sing for money. It’s cute and touching and… oh god, Selmy’s gonna die soon, isn’t he? Though it’s not clear by the end of the episode, both the elderly knight and Grey Worm wind up taking some terrible blows in a Sons of the Harpy-orchestrated blood bath in the city. They wind up laying unconscious next to each other, bleeding profusely among the carnage.