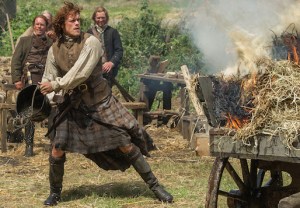 Many of you who watch Starz’s Outlander every week have read Diana Gabaldon’s novels. Then again, many of you haven’t. So consider this a public service for all of the newlanders out there: This week’s episode signals the beginning of the end, and the end is a rough place to be. Find a puppy to hug and a pillow to hide behind, because — given the way this week’s episode wraps up and what happens in the weeks to come — you’ll certainly need them.

Don’t get me wrong: This week’s hour is no skip through the moors, either. The very tense hour starts with Jamie staring down a gun and ends with our hero re-captured by the Redcoats who’ve been hunting him for years. In between are lies, false identities, a mild man moved to murder and an agonizing, complicated birth.

Remember when the most stressful part of an episode was wondering how many times Claire would punch Jamie’s v-card in a 60-minute span? Wasn’t that fun?

Och, well. Hunker down, everyone, and let’s review what happens in “The Watch.”

UNDER THE GUN | That guy holding the firepower on Jamie’s pretty red head? He’s Taran MacQuarrie, the leader of the local watch. MacQuarrie and his men provide “protection” from British troops and raiding clans, which sounds like a good thing until you realize that a) they intimidate families like the Murrays into accepting their services, b) their visits last for days and take a significant chunk out of the household’s food and booze stores, and c) they’re shady, boorish and look like they smell bad.

Jenny defuses the situation taking place in her foyer by telling MacQuarrie and his men that Jamie is her visiting cousin, and Jamie reluctantly goes along with the ruse — saying is last name is MacTavish — in the hopes that no one will find out he’s a wanted man with a price on his head. In private, though, he takes his sister and brother-in-law to task for entering into an agreement with such bullying bandits. He angrily adds he never would have done such a thing. “But you weren’t here, now, were you, Jamie MacTavish?” Jenny responds, biting off her words. Given that she is 300 months pregnant and suffering zero fools, her brother wisely shuts his gob.

YOU AGAIN? | That’s not to say, though, that the atmosphere gets any less uncomfortable while the watch resides at Lallybroch. MacQuarrie’s men basically are thuggish 5-year-olds who put their boots on the dinner table and their hands in every coin purse they can find in the place. Jamie gets into a dustup with one of the men after he lights a wagon full of hay on fire and chortles with glee as everyone scrambles to put it out. I’m fairly certain Jamie uses nothing but a horseshoe to beat the snot out of his multiple attackers, and that is rather cool. MacQuarrie seems to think so, too; he asks Jamie to join his merry band of dumb donkeys, but Jamie says his fighting days are over. (Side note from the future: How I wish that were so, honey.)

Big problems arise when MacQuarrie’s last man arrives at the house: It’s Horrocks, the British Army deserter Jamie paid for information a few episodes back. And because he has not changed his scumbaggy ways since last we saw him, Horrocks decides he’s going to blackmail Jamie into paying for his passage to the colonies — or else, he’ll tell the watch everything, and they’ll turn Jamie over to the British for the bounty.

BABY’S ON ITS WAY | Where’s Claire during all of this, you ask? Oh, upstairs helping Jenny, whose water broke in the dooryard and who’s likely going to deliver her second child breech (aka feet first). Nowadays, “breech baby” pretty much automatically equals “caesarian section.” But all Claire can do is try to turn the kiddo from the outside, which doesn’t work, and pray that the midwife will get there in time, which we later find out she won’t. Jenny declares she’s going to need a “wee dram” of whiskey to deal with the whole thing; Claire replies that it’ll make her drunk, and the baby, as well. “Then he’ll come into the world a true Scot,” the mom-to-be shoots back. Have I mentioned how I adore her?

To calm them both, Claire gets Jenny to talk as she paces an upstairs bedroom in her nightgown, asking her what it feels like to be pregnant. Two things: 1) Only Outlander could make the process of pregnancy and childbirth sound sexy. 2) After seeing preggo Geillis’ midnight skinnydancing and Jenny’s rounded silhouette through her shift, the Emmys should add a category specifically for make-up/prosthetics related to faux baby bellies; this show would win in a heartbeat. 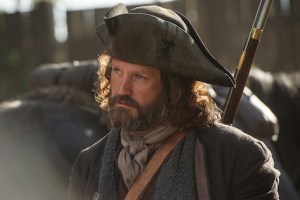 SOME BAD NEWS | Downstairs, Jamie confesses his terrible situation to Ian, who suggests that his brother-in-law take half of the money his father left him and use it to pay off Horrocks. During a break in the baby action, Jamie apologizes to Claire: That money was supposed to be for their family, which he makes clear he thinks will consist of multiple bairns.

Poor Claire has been in an enclosed space with a testy Scot who’s been leaking amniotic fluid for hours, so you can forgive her for being a little emotional. “It’s me who’s let you down,” she says, starting to cry. “I don’t think I can have children.” She adds that she tried — “with Frrrrrrrank,” Jamie says, packing an impressive amount of disgust into two tiny syllables — and the look on his face makes it clear that this news is a big blow. Still, he eventually pulls her close and says maybe it’s for the better: “I could bear pain myself, but I couldna bear yours. It would take more strength than I have,” he says.

He leaves her, puts a gun in his waistband and meets Horrocks, who happily relieves Jamie of his bag o’ cash. But of course the scalawag wants more coin to secure his silence. While Jamie is trying to figure out what to do, a blade pierces Horrocks from behind and comes out through his chest. Ian! You’re stealthy on that peg leg! I love Ian for killing that greasy-haired jerk, and I love him even more for the way his hand shakes uncontrollably afterward. Jamie eases his friend back to reality, then smiles and says, “Go get the shovel.” Good talk, guys!

All is well until the next morning, when MacQuarrie lets on that he knows that Jamie is hiding something and Horrocks is dead. Oops. When everything is out in the open, the watch leader has a surprising reaction: “Good. I never liked the Irish bastard.” And all seems well until Jamie realizes now he’s being bullied into taking Horrocks’ place with the gang, which is planning to raid a neighboring clan’s rent party later that day. Young Fraser grudgingly agrees to accompany them — “this once” — and Ian says he’s going, too.

Claire is like, “AM I THE ONLY ONE WHO THINKS IT’S A BIG DEAL THAT I MAY HAVE TO TOUCH PLACENTA ANY MINUTE NOW?” And the answer to that, per Jamie, Ian and Jenny herself, is “yes.” Jenny all but pushes her husband out the door in between contractions, so all Claire can do is give Jamie a tiny wooden snake his brother made years ago (and that Jenny found earlier) and warn him to “Haste ye back, or else.” Their kiss before he takes off is so hot, Claire should toss it in a bedwarmer and slide it between her sheets that night to toast her toes.

WELCOME TO THE WORLD, BABY GIRL | You have to commend Outlander for its parity: If it’s gonna show you a bunch of real-life detail in the sex scenes, you’re gonna get that same level of real-life detail in the inevitable-outcomes-of-those-sex-scenes. So we watch Jenny grunt, sweat, squirm, swear and scream her way through the final throes of labor, eventually delivering on all fours in a pile of straw (yeah, straw) on the floor with Claire up in her business. Luck is with them: The baby — a girl — is delivered safely, and Jenny names her Margaret Ellen.

But while the blessed event is going down at Lallybroch, Jamie and the men come under a British ambush. (Thanks, Horrocks.) We find that out three days later, when Ian — minus his fake leg and his horse — limps home with one of MacQuarrie’s thugs. MacQuarrie also got hurt, Jamie wouldn’t leave him, and “They took ‘im. The Redcoats have ’em,” Ian wheezes. With one last look at Claire’s “I gave up indoor plumbing for this?” face, we fade out.

The hour is a set-up for what’s to come, that’s for sure. And it diverges from the book — MacQuarrie and his men aren’t the instrument of Jamie’s undoing in the novel — but I’m OK with it. But enough about what I thought, now it’s your turn. What did you think of the episode? Sound off in the comments!