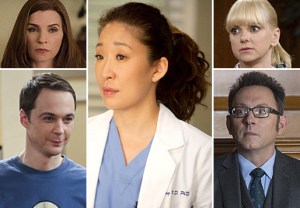 Question: I am sure you are getting bombarded with Grey’s Anatomy questions, but after Thursday’s episode I’m a little confused: I could’ve sworn Patrick Dempsey signed a two-year contract with ABC last year. What gives? —Laura
Ausiello: Four things: (1) Yes, it’s true, he signed a contract last year that was supposed to carry him through a potential Season 12. (2) Contracts are made to be broken. (3) Contracts tend to give networks/studios the “option” to change their minds at the end of each year. (4) The Grey’s Anatomy chapter of my forthcoming memoir — titled Spoiler Ha-lert! and available in fine bookstores in winter 2018 — will answer your question in greater detail.

Question: Will there be any familiar faces attending Derek’s funeral on this week’s Grey’s Anatomy? I am dying to know, please. —Ben
Ausiello: I see what you did there, and it’s too soon. I’m assuming you’re specifically asking if Cristina will be back to help Mer navigate the initial stages of grief, and I’ll answer your question with a question of my own: If Grey’s did manage to coax Sandra Oh back for an episode, don’t you think ABC would’ve teased the hell out of it in the promos for this week’s episode? (I’m anxious to see what excuse Cristina gives for not attending. She’d have to be dead herself not to hop the next plane to Seattle, right?) 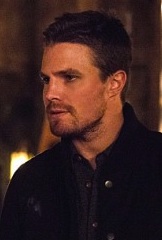 Question: What is Arrow the show going to look like now that Oliver is staying in Nanda Parbat? —Amir
Ausiello: For one, don’t worry about a rehash of the midseason arc that robbed Starling City of its hero. “The tricky thing about [the next episode] is making it different from… when Oliver was missing and presumed dead,” says showrunner Marc Guggenheim. “One of the things we talked about is, How is Team Arrow functioning post-Oliver? We didn’t want to get into ‘crime on the rise,’ because I felt like we did that with Brick, but you’ll see with [the next two episodes] what Team Arrow is up to and how they’re working to continue to protect the city.” And no, that doesn’t mean the Atom will simply step in to fill the void. As Guggenheim notes, “Every time Ray interacts with or allies himself with Team Arrow, there’s a story reason behind it, as opposed to just the assumption that, ‘OK, he’s part of the team now.’ [This week] is a very Team Arrow-centric episode, and Ray, for all of his charms and for all of the help he can provide, is not a member of Team Arrow.”

Question: Is there any hope for Alicia-Finn shippers on The Good Wife? Tell me yesss. —Chris
Ausiello: Your question is pretty definitively answered in the May 10 finale.

Question: So, Kalinda and Alicia on The Good Wife will share a scene together in the finale. Can you confirm or deny that it’s a flashback? No CGI involved I hope? —Ingmar
Ausiello: I can confirm it’s not a flashback. I can’t confirm how the episode was shot (i.e. body doubles, CGI, etc).

Question: Do you have any scoop on Mom‘s finale? —Iva
Ausiello: Fair warning, Iva, that Thursday’s Season 2 capper finds Christy coming to the realization that “the road to a happy life leads away from your mother.” And after dropping that bomb, Anna Faris and Allison Janney don’t share the screen again ’til the end of the installment. Lest that all sound too dire, though, a Marjorie sex scene (audio only), a maniacally hurled alarm clock and Christy’s repeated references to former timeslot rival The Voice deliver plenty of gut laughs to cut through the Plunkett family drama.

Question: What are the chances of a seventh season of Community? —Eddie
Ausiello: Slim to none. 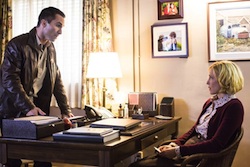 Question: Nestor Carbonell dropped a little bombshell when he mentioned shooting an “emotional and physical” scene with Vera Farmiga for next week’s Bates Motel. In the light of latest events between Norma and Romero, it sounds more ominous than promising. Anything to prepare us for what might be coming? —Maria
Ausiello: I’ll see his “emotional and physical” and raise him “heartbreaking and violent and kinda-sorta-hot.” I’ll also add that there is no way one of those actors didn’t walk away with some light bruising after shooting said scene.

Question: May I have some scoop on Gotham? —Monica
Ausiello: Yes you may, and then some. Here’s a report from Matt Mitovich, who has already seen Monday’s freshman finale: “It’s true, I audibly groaned at the close of last episode, seeing that a(nother) mob war would fuel the finale. But know what? It kinda works — though make no mistake, there are some sloppy twists. (Like the characters who make a bold escape only to be recaptured 15 seconds later.) Elsewhere, something involving Cat kinda broke my heart; we bid adieu to a character I was very sad to see go; and while the big Bruce reveal is teased in promos, it’s still pretty cool (yet absolutely should not have been spoiled). Also: The Riddler promises to be a quite different sort of villain.”

Question: Outlander — anything about the finale will be devoured and appreciated. –Erin
Ausiello: I can tell you what likely won’t be in the finale: Any mention of Jack Randall’s brother, a minor point in Diana Gabaldon’s first book but a major one in the second (and therefore likely important in the second season of the Starz drama). “I don’t think that made it into the edit,” series creator Ron Moore tells TVLine, and Tobias Menzies — whose character would have uttered the mysterious line (familiar to fans of the book) during a harrowing scene in the finale — says he can’t recall the mention, either.

Question: Any scoop on who’ll give Deacon a liver on Nashville? (I mean, there’s no way they’ll kill him off… right?) –Laura 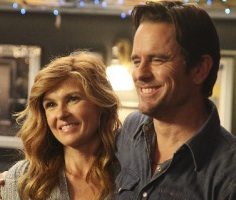 Ausiello: I’m inclined to agree with you, Laura. But we took the question straight to the man himself, star Charles Esten. He wouldn’t let us in on exactly what’s going to happen to his ailing alter ego — but he said he’d seen fan theories online that came really close. “Oh yeah. You always get the range, throughout the whole three seasons. They come close, but I always love that the writers are able to add that little detail you didn’t foresee,” he says. “It’s good, because we’re not just playing out what you expect. We’re playing out a different version of what you expect and keeping it interesting. That’s what the writers do so well, and what I’m so glad for.”

Question: I’m worried about Forever not coming back next year. Take my mind off it by giving me some finale scoop, please. —Barb
Ausiello: Remember when star Ioan Gruffudd told TVLine Henry wasn’t going to worry about Adam much in the future? The finale makes the why behind that statement abundantly clear — and not in the way you’re thinking.

Question: Got any scoop on Sansa and Baelish’s storyline on Game of Thrones? Thanks! –Nicole
Ausiello: That depends. Are you a fan of this really-not-OK pairing, Nicole? Because if so, you’ll love a scene in this week’s episode. And if not, you may want to skip the end of said scene.

Question: Color me curious and slightly perverted, but do we know what base Sheldon and Amy went to during their little sleepover on The Big Bang Theory a few weeks back? —Tammy
Ausiello: You’re disgusting Tammy. Here’s your answer directly from showrunner Steve Molaro: “They remain safely on first base.” BONUS SCOOP: The musical moment at the end of Thursday’s episode (the one I teased in last week’s AA) involves three of the show’s male characters crooning a classic tune from an iconic musical (one that was made into a great movie and then remade into a terrible one).

This AAnd That…
♦ I’m newly concerned about Person of Interest‘s renewal prospects, gang.
♦ I have an embarrassing confession to make: I only recently started watching (and loving and quoting) Broad City. Better late to the party than never to the party… right?
♦ I want — no, I need — to know how Mike Kelley envisioned Revenge ending.
♦ Twin Peaks update: My gut is telling me that a resolution in the David Lynch-Showtime imbroglio is nigh.