Question: Longtime reader here. Now that Nina Dobrev is leaving The Vampire Diaries, does that mean Elena will be taking the vampire cure? Thanks! — Kristen
Ausiello: It certainly seems like Elena’s jonesing to take the cure, doesn’t it, Kristen? (Especially after that clip we posted with her dreaming of having children with Damon.) We can’t confirm that Elena will end her run as a human or a vampire, but know this: Damon’s decision to share the cure with her (or not) will result in a “massive fallout” — not just for Elena, but for everyone on the show, according to executive producer Caroline Dries.

Question: Any hope of Nick and Jess getting back together on New Girl?! —Amy
Ausiello: Nick-Jess ‘shippers will get a tiny bone thrown their way in the form of brand new, never-before-seen post-breakup flashbacks in the May 5 finale. [AAditor’s note: The “tiny bone” thing  was not a subtle dig at Nick’s manhood.]

Question: I need some answers before pull all of my hair out. When will we get the next big question-making answer about the relationship between Red and Liz on The Blacklist? —Tamim
Ausiello: Here’s a tiny bone for you involving The Fulcrum, which has caused quite a rift in Red and Liz’s relationship. According to series creator Jon Bokenkamp, that pesky blackmail file is going to play a major role in the season’s final episodes. “It’s less about the information that’s in The Fulcrum,” he says, “and more about what that device is going to do to our characters, and the problems it’s going to create for them.” [AAditor’s note: The “tiny bone” thing… actually was a subtle dig at Red’s manhood.] 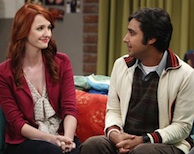 Question: I’m just adoring Emily on The Big Bang Theory. Any word if she will be finishing the season as Raj’s girlfriend, and if Laura Spencer will be asked back for next? —Todd
Ausiello: Unfortunately, Raj doesn’t share your infatuation with Em, a fact that will bubble to the surface in next month’s finale. “Raj is realizing that Emily may not be the right person for him,” previews exec producer Steve Molaro of the May 7 closer. “And he knows this in his heart. But he’s also never broken up with anybody in his life…”

Question: Do you have any Big Bang Theory scoop? —Felix
Ausiello: At the end of next week’s episode, there’s “a lovely and amazing, fun musical” moment that may or may not feature the cast breaking into song, hints Molaro.

Question: After seeing that promo for Arrow, you know what I have to ask: Oliver and Felicity! Holy hot buckets, was that sizzling or what? What can you tell me? I’m dying here. —Justlie
Ausiello: We did our darnedest to make showrunner Marc Guggenheim spill about that (seemingly) sexy sequence airing tonight, but he gave us a cold shower in return. “Left to my own devices, I wouldn’t really talk about that scene,” he deferred. “I mean, I’m excited for people to see it and see what we have up our sleeves, but I want people also to continue to speculate about, ‘Is it real? Is it a dream?’ Because on Arrow, nothing is ever straightforward, and nothing’s ever simple. What you saw in the trailer was certainly not the entire story.” 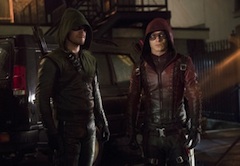 Question: Bummed Colton Haynes is leaving Arrow, but I’m happy he’ll be back for one more episode this season to wrap up his story. Any scoop on that? —Carrie
Ausiello: As Guggenheim points out, “Thea was too busy getting ‘killed’ by Ra’s to say goodbye to Roy. So we owed the audience some closure for this love story.” The pair’s farewell will take place in this season’s penultimate episode airing May 6. BONUS SPOILER: Remember that mystery set that was constructed for the finale? Guggenheim teases that it will play host to R’as, Nyssa and Oliver, and will likely not be seen again beyond the May 13 closer, because “it requires a fair amount of green screen work to make it work.”

Question: Could you confirm that Agah Bayar is returning to NCIS? —Zoe
Ausiello: Indeed, I could: Showrunner Gary Glasberg says that Tamer Hassan will put in a “really important” encore in the season’s penultimate episode, titled “The Lost Boys.” An arms dealer who has been featured on the series thrice before, “Agah Bayar has specific information” about an “unfortunate event” being planned by a terror group that recruits young people online. Notes the EP, “He and Gibbs always have good stuff together.”

Question: I’m a big fan of The Flash, specifically Iris West. I was wondering if you could tease anything coming up for her towards the end of the season? —Janneh
Ausiello: Iris will learn the truth about what’s going on with the men in her life “a lot sooner than” the May 19 finale, executive producer Andrew Kreisberg reveals. “How that happens and how it plays out with everybody else is going to make up the core of the last few episodes,” he confirms, adding, “She is not [going to be] happy with Joe and Barry and Eddie.” 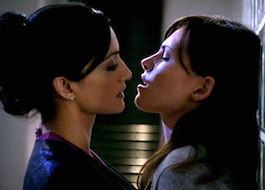 Question: What happened to Lana Delaney on The Good Wife? I thought Kalinda said she took her seriously. There’s also the white card they haven’t explained, and Lana’s FBI job. There are so many loose ends with the Kalinda/Lana story. —Eve
Ausiello: We went straight to showrunner Robert King with your question about the hotel-key-looking rectangle that drug kingpin Lemond Bishop wanted slipped into the purse of Jill Flint’s alter ego. (If you’ll recall, Kalinda instead broke it in half, although her refusal to betray her lady love probably did nothing to alleviate Bishop’s concerns about the FBI teaming up with the State’s Attorney’s office to bring him down.) “That’s really a very good question,” says King, with a chuckle. “I think you should continue to wonder. [That plot thread] is not necessarily in the realm of the Russian assassin on The Sopranos, but it is still alive. Let’s just leave it there.” (By the way, Eve, you’ve got to hit the comments and share what brand of ginkgo biloba you take, because your memory for details is pretty impressive!)

Question: Is there a chance for The Good Wife‘s Alicia and Peter to reconnect romantically in the wake of them aligning against the Democratic party machine? Previews for Episode 20 kind of make it look that way. —Russell
Ausiello: Love, as they say, is a many splendored thing, but Team Florrick has its own unique take on the concept, says Robert King, flashing back to Episode 18. “What was very clarifying was that scene when Alicia and Peter say they’re done with arguing… [Peter] starts getting this look in his eyes and [essentially] saying, ‘Let’s f–k,’ and then Alicia is saying, ‘No, no, no, no, that’s not what this is about,'” King offers, with a hearty chuckle. “They wind up just sitting there and drinking together. They’re championing detente in a very fraught relationship just because of exhaustion. At a certain point the human body has a great and strange ability to numb all the pain, and that’s where Alicia and Peter tend to go now.” Nevertheless, faced with an outside threat, “They aid, support and give strength to each other,” he adds. “Whether that goes deeper is a bigger question.” Michelle King, for her part, offers that, “Whether Alicia and Peter are living under the same roof or not, there is something very real there. We’ve seen a very deep connection between these two people throughout the series.” In other words, don’t bet the entire mortgage on Finn Polmar, OK? 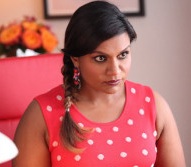 Question: I was recently perusing the Renewal Scorecard and saw that you have The Mindy Project‘s chances now listed as a long-shot — I’m so bummed! I thought the third season was the strongest yet.  —Briana
Ausiello: Creatively, the show is in tip-top shape. It’s the ratings that continue to be a drag. And the fact that Fox doesn’t own the show — and therefore stands to gain nothing from its syndication prospects — makes the odds of renewal very slim. Having said that, you better believe NBC (which does own the show) will start pitching Mindy to other potential suitors should Fox pull the plug.

Question: Any info about Tyrion and Daenerys’ first meeting on Game of Thrones? —Courtney
Ausiello: I can tell you that it doesn’t happen this Sunday. And speaking of the youngest Lannister sibling and this week’s episode, make sure you stay tuned until the very end: Tyrion runs into a familiar face on his path to Meereen.

Question: That weirdly intriguing, post-divorce kiss between Phil and Carol on Last Man on Earth was probably the most chemistry they’ve had since their fun, pre-Melissa married life. Anything else coming up for them? —Nancy
Ausiello: Something else is definitely coming up for them. And it’s big. And sweet. And surprising. And that’s all I’m going to say about that.

Question: Hart of Dixie is amazing and I’d love to know your sincere opinion about the chance of a renewal. —Audrey
Ausiello: Still not happening. Sincerely. 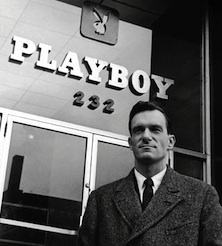 Question: Any scoop on Masters of Sex’s third season? — Emily
Ausiello: When the Showtime drama flashes forward to the mid-1960s, it will introduce a real master of sex — Hugh Hefner, no less. And, since the casting call for the potentially recurring role notes that, in addition to being an smooth operator and gifted schmoozer, the Playboy publisher is 40 during this period, I can’t help but note that Jon Hamm is between series. (Also worth noting: He’d never in a million years do it.)

Question:  Can you tell us anything about Season 6 of The Walking Dead? —Jabari
Ausiello: Yup. If the recurring character of Delvin turns out to be half as cool as his casting notice makes him out to be, I have a new hero (and you likely do, too). According to the breakdown for the role, the twentysomething African-American cynic is left so dumbfounded by displays of stupidity that it’s nearly impossible for him to admit that he thinks, down deep, people are — or at least can be — decent. Even if they’re idiots. (I love him already.)

Question: Will the audience ever find out what is in the box that Deeks opened on NCIS: LA? I’m dying to find out what “everything he ever wanted” actually means. —Leah-Margaret
Ausiello: I’m going to farm this one out to exec producer Shane Brennan, if that’s cool with you Lea-Margaret. “The mystery of what’s in the box will be revisited next season,” confirms the EP, before cryptically adding, “Will we find out what’s in it? Maybe….”

♦ Putting this out there now: I’m going to have a very hard time buying whatever Scandal is selling if it turns out that Jake survived last week’s brutal stairway stabbing.
♦ I’m hearing encouraging news on the state of Stana Katic’s Castle negotiations.
♦ AMC’s splitting-final-seasons gimmick worked for Breaking Bad. It is not working for Mad Men, which (sadly) feels like it’s limping to the finish line.
♦ Arrested Development Season 5 update directly from Tony Hale: “Whether it’s seven episodes or 17 episodes, we would all jump at the chance to return. I, personally, want to know what happened to Buster!”