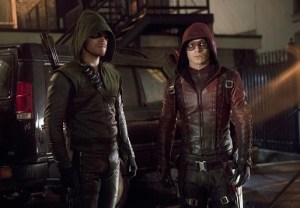 The following contains a major spoiler from this Wednesday’s episode of The CW’s Arrow.

Team Arrow has reduced its head count by one.

Yup, when former street rat Roy Harper left Starling City at the end of the April 15 episode — after Diggle, Felicity and a friend of Lyla’s helped fake his death via prison stabbing — Colton Haynes in turn said goodbye to the CW series he has called home since early Season 1.

Joining Arrow after a run on Teen Wolf, Haynes’ deal with the show was on somewhat of a “trial” basis, so the eventual parting of ways was to be expected, producers told BuzzFeed.com.

“It was super sad, but everybody kind of looked at each other and realized that he’s at the start of, what I’m sure will be, an incredibly, incredibly impressive career,” EP Greg Berlanti told BuzzFeed. “It’s great that he gets to go on and have that and we got to have him while we did.”

Haynes is set to appear in one more Season 3 episode; the Arrow season finale airs May 13.

“The hope is that he’ll continue to be part of the universe we are building,” EP Marc Guggenheim told our sister site Deadline. “We love working with him so much. We’ve talked to him about returning to one of the three shows, and if available, he has expressed interest. He is gone, but definitely not forever.”