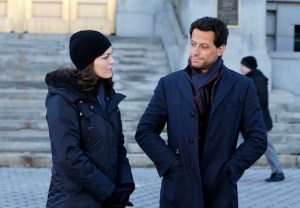 Well, Forever fans, now we know what became of the second Mrs. Henry Morgan. Somehow, it’s so much worse than expected, no?

Tuesday’s episode revealed that Abe’s mother had experienced a change of heart after leaving her son and husband in the 1980s, and that she’d planned for them to reunite as a family, but a chance encounter with Adam had ended with her death.

PHOTOS May Sweeps/Finale Preview: Get 100+ Spoilers and Exclusive Pics From Your Favorite Shows, Including Forever

Even worse, Henry learned that Abigail killed herself in a desperate effort to keep Adam from finding Dr. Morgan… which, of course, he did anyway: In effect, Abigail’s death served no purpose.

TVLine talked with star Ioan Gruffudd about Abigail’s sad fate and what it means for Henry’s future, particularly where Jo is concerned. Along the way, we got some scoop on the May 5 season — and possibly series? — finale. Read on for all the goodies (and to find out what The Simpsons‘ Mr. Burns has to do with Forever‘s season-ender).

TVLINE | The episode puts a very definite end on what became of Abigail. How long before you shot the episode did you know this was coming?
Ah, interesting. You know what? I didn’t ask, and I wasn’t necessarily told. I just read the script. In conversation with [series creator] Matt [Miller], he said that we would find a way to tie up the Abigail story so, should we get a second season, we can start a whole other romance — either from time gone by or even the present-day romance — to conflict with the idea that Henry should be with Jo.

Actually, it was quite a sad moment for me to discover this was happening, because I have absolutely loved this whole relationship with Abigail. I thought it was so beautiful that we transitioned from the ’40s and ’50s all the way to the ’80s when she disappeared. And that we were able to see a unique relationship on the screen, of a guy who’s in his late 30s/early 40s with somebody he truly loved. We’d seen the romantic element of it and the true love of it when she’s in her 60s. It was really beautiful.

TVLINE | Did you ever think she might still be alive?
I certainly thought that from the pilot, actually… I always thought there was a chance. We alluded to it in this episode but it never actually made it to air. When we approach the older lady at the house in Tarrytown, it’s clear on Henry’s face that this could possibly be Abigail. We dropped a couple of lines there that made it look like Henry really hoped and wished it was. But I’ve always thought there was a possibility that she was still alive. But the way that we’ve tied it up is kind of truthful in a way and terribly tragic and weaves into the Adam story quite brilliantly, as well. It’s haunting, the whole thing.

TVLINE | Do you see Henry being more hesitant to enter into another relationship, given how the increasing age difference between him and Abigail caused such problems?
I think this is the premise of his entire character. Every week almost there’s a moment where Abe says, “You’ve got to try and live in the here and now and forget about the past…” So yes, it’s always going to be a nightmare for Henry, I think. [Laughs] Being locked in time. Now that we’ve had this tragic ending to this story, maybe we’ll have a bit more empathy for Henry going into next season, if we get one. Even with the relationship with Jo, how would we play that out over 10 years? [Laughs] If we’re still around in 10 years.

TVLINE | On a similar note, do you think Henry would be more reluctant to enter into a new relationship, knowing that Adam is a threat?
That might be taking it a step too far. What’s interesting and fun is this question of falling in love. When it’s true love, you can’t help it. You can’t help being around that person at all times. You’re doing things without thinking about them. You’re putting yourself in their sphere without even thinking of consequences. The idea of falling in love is such a powerful emotion that I think it would be lovely to see Henry giving into that rather than being mathematical and thinking, “Well, Adam’s got this over me.” But you haven’t seen the last episode yet, have you?

TVLINE | I have not.
So I’ve got the benefit of having seen the last episode, which will shed light on my answer, really. I’m not going to worry about Adam. [Laughs]

TVLINE | There’s a moment with Jo in the antiques shop at the end of the episode before this one, where it seems like she’s maybe starting to see Henry in a more-than-friends light. It also seems like Henry’s not quite there yet, regarding her. Is that an accurate read of where they are right now?
Yes, yes. What’s interesting is that she comes to that point, and possibly Henry does, too. But of course, this lie that he’s carrying with him comes to the surface again quite strongly in the finale. It was interesting to play the finale, because I didn’t recognize this guy. I always thought Henry was much smarter than he was in the finale. Because every time he’s caught in the middle of something, he makes excuses and leaves. He doesn’t finesse his way out of a corner [Laughs], which makes Jo think there’s something up with this guy… So we planted that seed, yes, at the end of the last episode. But in the finale, she’s like, “Who the hell is this guy?” [Laughs]

TVLINE | What can you tell me about John Noble’s character and the part he plays in the finale?
I hate to make a comparison with an animated character, but remember Mr. Montgomery Burns in The Simpsons? [Laughs] I don’t know why that came to mind when I was reading about him. He’s this older guy, smart guy, moneyed guy who loves art and history and artifacts. Very influential in the art world… Adam’s chasing this weapon that killed Adam originally, and [there’s this] idea that maybe the original weapon is the one that will put the end to this curse… So yes, as you can imagine, this specific dagger from the Roman era is found, and Adam wants it. John Noble’s character wants it. And John Noble’s character puts two and two together and knows that there’s something afoot. And he knows that Henry knows that there’s something afoot with this dagger, and he’s really interested in this idea: Wow, immortality. Does this really exist? It’s really cool. He’s amazing.

TVLINE | You mentioned renewal prospects. How are you feeling about the chances of coming back? It’s one of those things you can only learn from experience. I was on a great show called Ringer. We were all flabbergasted we didn’t get picked up — even though, statistically, the writing was on the wall, yes. Because it’s a numbers game, right? We weren’t pulling in the numbers compared to the other shows on the network and whatever. Our show was expensive. I understood it in my head; in my heart, I really wanted it to go on.

If I got the call saying, “Look, they’re not going to [renew Forever]. They’ve got another pilot they shot this year, ABC is so happy, they love it, they want to put it in that spot to compete with Person of Interest and all the other networks,” then I’d understand it in my head. In my heart, I’d be crushed. This has just been a gift that has fallen into my lap, to play this part. I absolutely love this guy. I love the people I work with. I love the writing, I love the whole premise of it and I just wish, wish, wish more people would get the chance to see it. Yes, it’s a procedural, but it’s got that wonderful twist. And I think smart people who love shows like Breaking Bad and True Detective actually enjoy this as sort of a guilty pleasure-with-a-little-bit-of-thinking. I wish that more people would see it and it would give us enough numbers to tip it over the edge. It’s a long-winded way of saying I’m sitting here, trying to keep my mind occupied, not thinking about it.