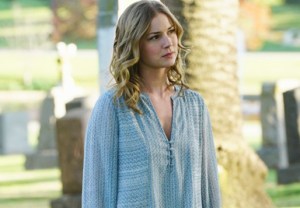 Though promos for Sunday’s episode touted a massive explosion at Grayson Manor, there was one key detail ABC chose to leave out: Victoria ignited the blast with herself still inside!

So… is that it? Did the Queen of the Hamptons really conclude that killing herself, and presumably framing Amanda, would make her the winner of Revenge‘s ongoing war? My hunch is that Victoria, like most “dead” characters on this show, somehow managed to survive the explosion — though you have to admit, that was a hell of a sequence. [Update: Click here to find out Victoria’s fate!]

The episode’s final moments also featured the return of Mason Treadwell, who is understandably peeved that Amanda chose to unexpectedly out herself, thus rendering his planned tell-all fairly irrelevant. But, honestly, who has time to care about Mason when Victoria might be dead? Priorities, people!

THE BIG C | During yet another scuffle with Stevie — this time over the changing of Carl’s birth certificate to reflect his true parentage — David revealed that he’s been diagnosed with lymphoma. His doctor caught it early, and he’s already beginning an  aggressive course of treatment, but he couldn’t bring himself to tell Amanda. (Because that’s exactly what the Clarke family needs: more secrets!) At least he’ll have Stevie’s support, and possibly more, as he goes through this difficult process.

HEAD WEST, YOUNG JACK | Jack Porter, Hollywood hotshot? After a bit of soul searching and plenty of chiseled-chin scratching, Jack finally figured out his next move — and, unfortunately, it doesn’t involve Emily, or even the Hamptons for that matter. Jack announced plans to move to Los Angeles for a fresh start with Carl, which forced Amanda to (finally!) own up to her feelings. “I don’t deserve him,” she told Nolan… and Ben, who was apparently lurking in the shadows like some sort of gorgeous crazy person. The Hamptons’ newest detective was, unsurprisingly, disappointed to hear Amanda’s confession, though I think I speak for every single fan when I say it was about damn time. She did her best to stop Jack from taking off, but it seems that not even Amanda Clarke can overcome a powered-off phone.

THE EX GAMES | Speaking of phones… Despite Louise’s best efforts to destroy her ex-husband’s happiness, she learned that it’s futile to challenge Nolan Ross — especially using technology. She attempted to record him confessing to attacking Victoria, or at least knowing about the attack, but all she ended up with was a reset cell phone. In fact, the evening was a double-fail for ol’ Louise, because Nolan and Tony’s relationship is apparently stronger than ever. At least she has Margaux’s cold, unfeeling shoulder to rest her head on. That’s… something. Right?

Revenge fans, let’s talk: Do you think Victoria is really dead? Is there still hope for Jack and Emily? And, ugh, what is it going to take for Ben to just go away forever? Drop a comment with your thoughts on the episode below.