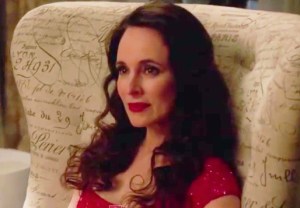 It was the blast heard ’round the Hamptons on Sunday’s Revenge, as Grayson Manor was utterly destroyed in a series of fiery explosions. But did Victoria really go down in flames, once and for all?

Unfortunately for all your Vicky sympathizers out there, the answer is yes.

“People have different theories about it all, but one thing you need to remember is that Victoria has displayed that she’s suicidal,” Madeleine Stowe tells TVLine. “There’s always been a bit of a death wish in her. She has a history of that, so this shouldn’t be a complete surprise.”

Below, Stowe takes TVLine inside the mind of Victoria Grayson during her final moments, reflects on four seasons of Revenge and gives us a taste of what’s to come in the ABC drama’s final episodes.

TVLINE | I’ll admit, I was surprised to see how it all went down. What was your reaction when you found out this was happening?
Here’s the background on this: I’m very story centric, and I felt strongly at different junctures that there were perfect opportunities to end Victoria’s story — once at the end of Season 1, but nobody wanted to do that. [Laughs] The other was at the end of Season 3, and I really felt her story was done there. I had a long discussion with the writers, with [showrunner] Sunil [Nayar], with some executives from ABC … and I said, “What is a compelling reason to bring her back, aside from just to bring her back? This is a perfect ending right here. It satisfies something for the audience; Emily got her revenge, put her adversary in the rubber room and Conrad’s gone.” But they felt there was more to tell, and they had the right to exercise that option. Going into this season, I really felt that it was time, so this was the end result.

TVLINE | So, is this the last we’ve seen of Victoria Grayson?
You’ll see some stuff in flashbacks, which will explain more about what her state of mind was. Some people feel that Victoria’s story hadn’t fully wrapped up, so there should be — unless something has changed — some very strong revelations which we shot. You’ll get to understand her a little more.

TVLINE | She’s easily one of the most complicated characters on TV right now, I feel.
[Laughs] I don’t know about on TV, but certainly on this show. She has a very difficult history that we haven’t been able to tap into too often. The show really revolves around this little girl who grew up to exact revenge and the pain my character inflicted on her. So you may not sympathize with Victoria, but you will understand more about what drove her in the coming episodes. You’ll also know why she was suicidal; boarding that plane in Season 1 was essentially an act of suicide, because she knew there was a chance it would be blown up.

TVLINE | Forget Emily. It sounds like you‘re Victoria’s greatest threat, wanting her dead so many times.
I did feel that. This storyline could only go so far, unless you were going to take a radical departure — and what would that be? That David Clarke was a bad guy? I don’t think they’d ever do that.

TVLINE | You probably never expected you’d get an entire season to act out Victoria and David’s story in real time. How was that this year with James Tupper?
I love working with James. He’s a romantic, and what was interesting was that he truly believed his character was in love with Victoria. I was like, “No, I don’t think that’s what they’re doing.” There was some back and forth about the nature of that relationship; I think ABC felt very strongly about the kind of show they believed in making, and it was successful for them, and they know their audience really well. Veering from that would have been unsettling, and for good reason. Making David Clarke a bad guy would upset the balance of everything.

TVLINE | ABC hasn’t officially confirmed this to be the last season. Will people feel satisfied with the finale, either way? What kind of closure is there?
I don’t know, it’s hard to tell. You don’t know until the end product is done. A lot of fans will find closure. The only thing I can tell you is that Amanda can never shake Victoria. These two are going to be put together for good.

TVLINE | Well, the finale is called “Two Graves,” so that just made it even more ominous.
There’s a lot of sweetness in it, too. I guess it depends whose prism you’re viewing the show through. I happen to love Victoria. I loved her on the page, and I think there’s a lot that’s really telling about her. She made the decision to betray David because her son was being threatened, and that’s not something a lot of people pay attention to. She’s the villainess, and people are so emotionally invested in Amanda Clarke, so they can’t step back and see the other side. I get her, and I understand why she would view Amanda as the enemy all the way to her grave. She’s determined to go to the grave and take Amanda with her.

TVLINE | Looking back on your time in the Hamptons, do you have a favorite memory or storyline?
There are a couple. I really loved the arc and progression in Season 1. She started as a very conflicted woman. She felt terrible about the things she did to David; they really haunted her. But she was also very protective of her environment. I loved that she was trying to purge herself of her dark history, and take Conrad down in the process. I thought the season finale, when she boarded that plane, was very breathtaking. … There were also things Victoria did that I didn’t necessarily agree with as Madeleine, but they served the story in a terrific way — like when she went so crazy that she killed Aiden. That helped to push the story of Revenge to its zenith.

Revenge fans, are you surprised to learn that Victoria is, in fact, dead? And how do you hope the rest of the season plays out? Drop a comment with all of your thoughts below.