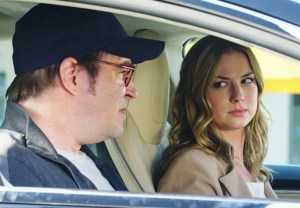 The question on every Revenge fan’s mind after Sunday’s episode (who Sharpie’d Amanda Clarke?) might already have an answer.

Newly released photos from the ABC drama’s April 26 episode find Em…anda engaging in some rather suspicious behavior with a very familiar face: Mason Treadwell! Yes, Roger Bart’s character is coming out of hiding — and looking like even more of a shut-in than usual — in the final episodes of Season 4, though his exact business with Amanda remains unclear. (A book deal, perhaps?)

In case you feel like theorizing, here’s the official logline for the episode, appropriately titled “Aftermath”: “As Emily sifts through the wreckage of her life, even her closest friends worry she has finally gone too far.”

Meanwhile, this new batch of photos also includes a few shots of Jack (aka Amanda’s future husband) catching some rays in his bathing suit — you know, if you’re into that sort of thing.

Revenge-rs, browse the new photos below, then drop a comment: How do you hope Season 4 — and potentially the series itself — will end?