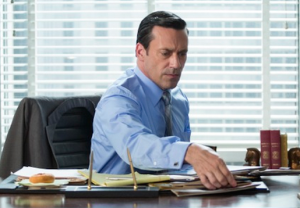 At the end of life, it’s natural to consider what lies beyond. So it makes sense that Don spends most of this week’s Mad Men — one of the series’ final installments — searching for an answer to what the future holds.

Ostensibly, he’s trying to come up with some pretty language about the future of Sterling Cooper & Partners so Roger will sound good when he makes a speech regarding the firm’s prospects. But Draper is at a personal crossroads, too — single again, about to move to a new home —  and that fact seems to weigh on him. Though he crowd-sources the “What’s next?” question at work and considers it in light of his daughter’s ever-quickening entrance into adulthood, he seems no closer to resolution at the end of the episode than he is at the beginning.

And that’s fine… provided that Don continues to worry away at this concept like a tongue touching a sore tooth for the rest of the series’ run. So help me, Draper, if the next episode opens with you nailing some waitress/flight attendant/secretary and diving to the bottom of a bottle, we’re going to have to have a serious talk.

Elsewhere in the episode: Mathis finds himself outta work, Joan finds that something too good to be true usually is, and Betty finds herself in an awkward moment smack dab in the middle of her kitchen.

Read on as we review what takes place in “The Forecast.”

JOAN, JILTED | Let’s begin with the storyline I found most satisfying: Joan’s bicoastal romance. As we watch her take an early morning collect call from her mother, it becomes clear she’s in California on a work trip. Her hair is perfectly chignon’d, her nightgown a beautiful teal number; damn, Joan actually did wake up like this.

At SC&P’s western branch later that day, she mistakenly thinks that a man who walks into the room is a job applicant. As it turns out, he’s not — but he eyes Joan as though he wouldn’t mind filling out any form she had to offer. His name is Richard (played by St. Elsewhere‘s Bruce Greenwood), he’s a divorced dad of adult kids, and he’s reveling in the fact that his freedom allows him to do things like travel as much as he wants and bed buxom-and-willing redheads. She says she’s divorced, too — “Boy, did he blow it,” Richard says. “He did,” she replies. Man, I love happy Joan. — but doesn’t admit to having a 4-year-old at home until Richard follows her back to New York and takes her out for dinner. “You’re such a disappointment,” she says, a line so quintessentially Joanie that it made me wish she’d had more to do this season. She’s so good at matter-of-fact delivery of lines that are absolutely devastating. (See also Season 1’s: “Peggy, this isn’t China. There’s no money in virginity.”)

Richard later sees the error of his ways and comes to the office to offer flowers and an apology, in the hopes that when he buys a place in New York, she — and Kevin and her mom — will come by. It’s a sweet gesture, but given how quick he was to raise his voice to her earlier in the hour, I can’t blame her for being a little gun-shy about giving this guy even the ghost of an opening for a second chance.

AND THEN WHAT? | Don is woken up one morning by his brassy realtor, who needs him out so she can show the apartment. She laments the emptiness of the place (he’s been using the patio furniture in the living room); he counters that it offers limitless possibility. “It looks like a sad person lives here,” she later tells him. “This place reeks of failure.” I like this lady. Do they call her a realtor because she serves up realness? While you’re contemplating that, I’m going to have to get in my time machine so I can go back and buy that palatial Manhattan pad for $85,000. Be right back!

OK, I’m here again. You’ll love what I’ve done with the place. Anyway, Roger assigns Don the write-up about the future, and it sends the pomaded one drifting about the office and asking Ted and Peggy what they think the upcoming years hold. Ted muses about bigger clients. Peggy wants to be SC&P’s first female creative director; Don eventually teases out of her that she wants fame and to “create something of lasting value” then, true to their relationship, he mocks her by saying, “In advertising?” Poor Peggy storms out, saying, “Why don’t you just write down all of your dreams, so I can s—t on them?”

But Draper gets as good as he gives in this episode. The first comes from Mathis, who makes a terrible showing in front of a client twice and is mad at Don for the advice he gave. “You don’t have any character. You’re just handsome. Stop kidding yourself!” the younger man shouts, earning him a swift firing. (Take heart, Mathis: There have been many, many far less dignified exits from that firm.) The second comes from Sally after Don takes her and some friends out for dinner the night they leave for a teen tour of the United States. Miffed that Don was mildly flirty with one of her forward girlfriends, Sally says her parents are attention whores and declares that when she grows up she’ll “hopefully be a different person than you two.” Ouch.

Back at the apartment, the realtor has sold the apartment. And while the new owners sign papers, Don stands in the hallway and looks bereft.

A MISS BEFORE DYING? | And now, for the “Oh my God, Glenn’s so grown up!/Oh my God, what is Glenn doing?!” portion of the evening. Sally’s longtime pal shows up unannounced at Betty and Henry’s house, sporting sideburns, chest hair and some hard news: He’s shipping out to Vietnam in a week. Sally gets so angry that she calls him a murderer and stomps off, even though doing so means she won’t be able to say goodbye before she leaves for her big trip.

The now-18-year-old Glenn stops by the house again later, anyway, and that’s when it becomes clear that he’s really there to see Betty… and that he’s been thinking about her, a lot. “I know something could happen to me” in Vietnam, he says, sidling closer to her in the kitchen and reaching for her. “But I feel safe, because I know you’re mine.” And then I squirm with discomfort when he tries to kiss her and she turns her head. Interesting that the reason she gives for shutting him down is “I’m married,” eh? Pretty soon, they’re right back to their Season 1 roles, with her comforting him, this time about enlisting just because he’d flunked out of college and didn’t want to make his stepfather mad. “You’re going to make it. I’m positive,” she says softly.