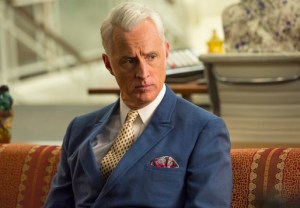 Throughout Mad Men‘s seven-season run, if someone at the firm was going to do something ridiculous, that someone was usually Roger Sterling.

We couldn’t let the series — which begins its final run of episodes Sunday (AMC, 10/9c) — come to a close without getting John Slattery‘s thoughts on his wry, ribald alter ego. Read on for the actor’s retrospective look at his character (and don’t worry, we definitely asked about Joan).

TVLINE | Roger was the character that got involved in some interesting aspects of the decades Mad Men covered. We had LSD Roger, we had hippie orgy Roger, we had talk-therapy Roger. Let’s take that into the ’80s or ’90s. What would he have gotten into then?
I’m sure he would’ve tried it all. I’m trying to picture coked-up, disco Roger. It’s funny, when you just said the shrink thing, as a positive, I think he evolved. He changed his mind or he was informed one way or another and said, “Based on what I’m seeing, I might’ve been wrong about this therapy.” In Season 1, I think there’s a scene Don asked him, “What do women want?,” and Roger goes, “Who cares?” His attitude was, “Suck it up. I come from this WWII generation where we went to war, we fought, we came back, we took the uniform off, we put a suit on, we went to work.” He was proud of that, and he was disparaging of Pete Campbell’s generation, who didn’t fight and bitched about this and that.

And then, six years later, he’s in therapy because he saw the benefits of it or was trying to stay interested… I don’t think he wanted to be the younger generation. He just wanted to pick and choose the best parts of what those generations were into. 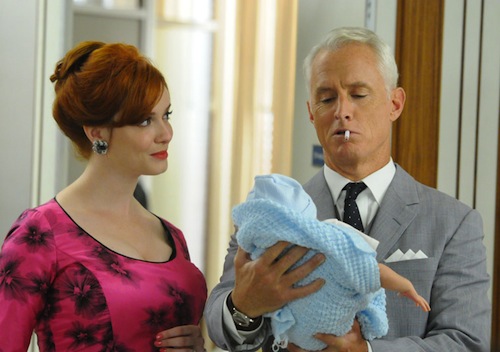 TVLINE | We’ve seen him with a bunch of women throughout the series. Joan is, obviously, the fan favorite — is she the love of his life? Or is she just the one we saw him with the most?
I don’t know. I think she was probably the woman in his life who, for the longest period of time, understood him. They related to each other for the longest period of time, at least within [what we saw on] the show; Mona and he were together for a long time. What I think is good about [the Roger-Joan] relationship is, it’s not explained. It’’s not explained why they don’t end up together — as far as we’ve seen. It remains to be seen whether they do. [It] happens to people. You know, you go, “Why didn’t you ever marry so-and-so? You guys seemed like you got along so well.” Well, practical reasons being what they are, money issues, class issues, whatever, it doesn’t work out. It doesn’t mean that person isn’t the love of your life.

TVLINE | The McCann-Erickson deal requires that Roger take a stronger lead position in the firm, moving forward. Is he a leader of men? Is he ready for that responsibility?
I think he tries to prove that he is a leader of men, because Bert tells him, in fact, that he’s not… I don’t think Roger’s ever cared to be a leader. He’s perfectly secure with his position, but when push comes to shove, he’s a pragmatist. And in the name of survival, he orchestrates this deal. So I don’t know. I don’t know whether that’s of interest to Roger, to be the guy upfront, holding the flag.

TVLINE | Can you think of a moment that you read in an upcoming script and thought, “I cannot wait to play this?”
Every week, I would get something, and [Jon Hamm] and I would sit across from each other at these read-throughs and he’d be like, “That’s like four jokes on that one page,” and I’d be like, “Yeah, look across the table. Look at those three women you’re going to sleep with this week.” It was pretty funny. Literally every script, there were at least a couple things that I thought, “I can’t wait to play that.”

TVLINE | Did you ever worry that Roger was ever going to get a hairline like Pete had?
My hairline isn’t far from Pete’s! [Laughs] That was great. See, that’s the great thing about television series like that: You can do that. In the first season, Peggy gets pregnant, and no one really knows that that’s what it is. She just keeps getting bigger and bigger, and then she just walks by and someone goes, “Is it me or is she… What the hell is she eating?” [Laughs] It’s just a great thing you can do that you can’t do in a one-off type of situation. Vinnie’s hairline is… What a great idea.